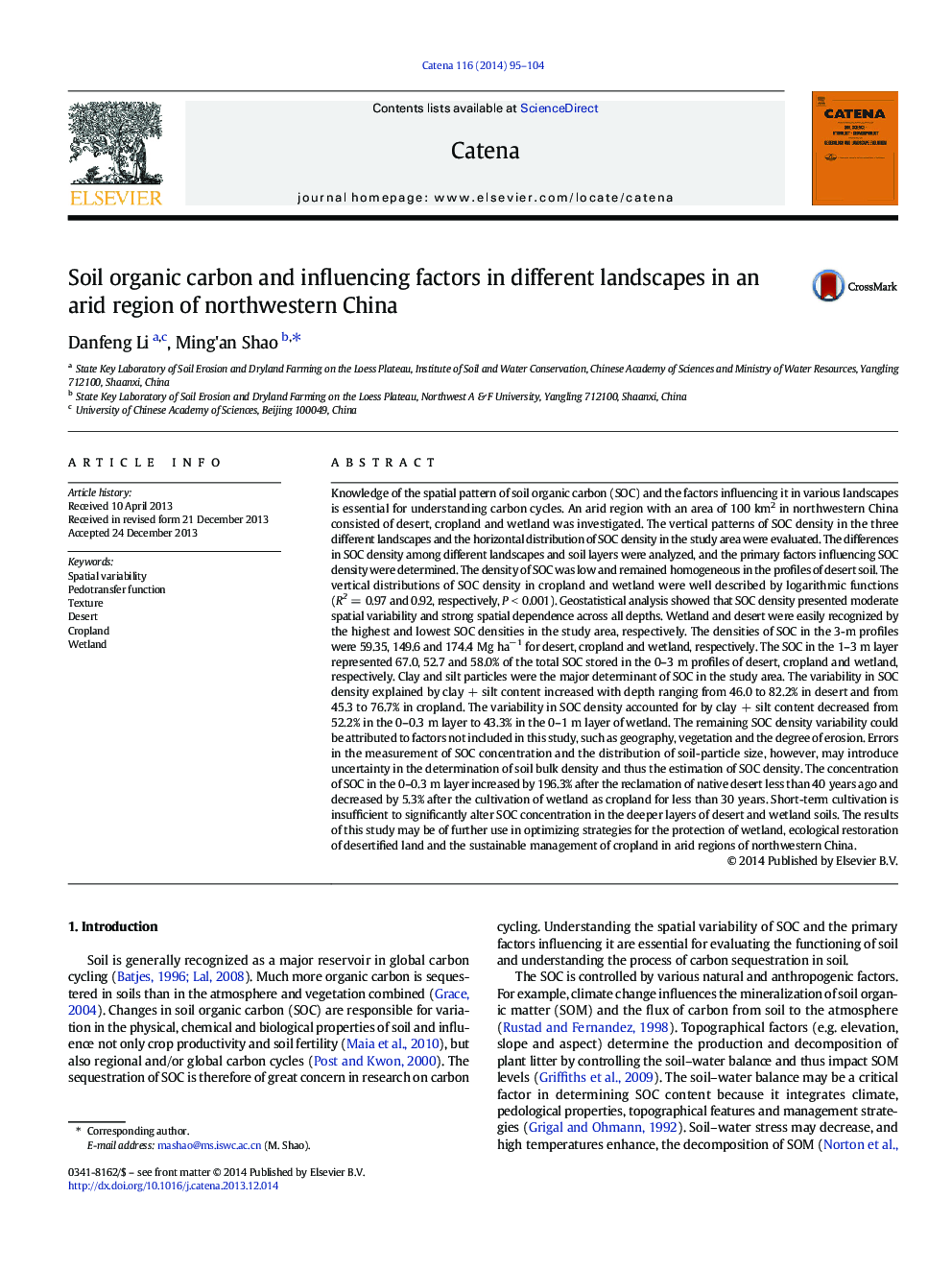 • We investigated the distribution and influencing factors of soil organic carbon (SOC);
• Wetland and desert had the highest and the lowest SOC, respectively;
• Fine particles were the major determinant of SOC for desert and cropland;
• Wetland and desert both have the potential to be C sinks.

Knowledge of the spatial pattern of soil organic carbon (SOC) and the factors influencing it in various landscapes is essential for understanding carbon cycles. An arid region with an area of 100 km2 in northwestern China consisted of desert, cropland and wetland was investigated. The vertical patterns of SOC density in the three different landscapes and the horizontal distribution of SOC density in the study area were evaluated. The differences in SOC density among different landscapes and soil layers were analyzed, and the primary factors influencing SOC density were determined. The density of SOC was low and remained homogeneous in the profiles of desert soil. The vertical distributions of SOC density in cropland and wetland were well described by logarithmic functions (R2 = 0.97 and 0.92, respectively, P < 0.001). Geostatistical analysis showed that SOC density presented moderate spatial variability and strong spatial dependence across all depths. Wetland and desert were easily recognized by the highest and lowest SOC densities in the study area, respectively. The densities of SOC in the 3-m profiles were 59.35, 149.6 and 174.4 Mg ha− 1 for desert, cropland and wetland, respectively. The SOC in the 1–3 m layer represented 67.0, 52.7 and 58.0% of the total SOC stored in the 0–3 m profiles of desert, cropland and wetland, respectively. Clay and silt particles were the major determinant of SOC in the study area. The variability in SOC density explained by clay + silt content increased with depth ranging from 46.0 to 82.2% in desert and from 45.3 to 76.7% in cropland. The variability in SOC density accounted for by clay + silt content decreased from 52.2% in the 0–0.3 m layer to 43.3% in the 0–1 m layer of wetland. The remaining SOC density variability could be attributed to factors not included in this study, such as geography, vegetation and the degree of erosion. Errors in the measurement of SOC concentration and the distribution of soil-particle size, however, may introduce uncertainty in the determination of soil bulk density and thus the estimation of SOC density. The concentration of SOC in the 0–0.3 m layer increased by 196.3% after the reclamation of native desert less than 40 years ago and decreased by 5.3% after the cultivation of wetland as cropland for less than 30 years. Short-term cultivation is insufficient to significantly alter SOC concentration in the deeper layers of desert and wetland soils. The results of this study may be of further use in optimizing strategies for the protection of wetland, ecological restoration of desertified land and the sustainable management of cropland in arid regions of northwestern China.