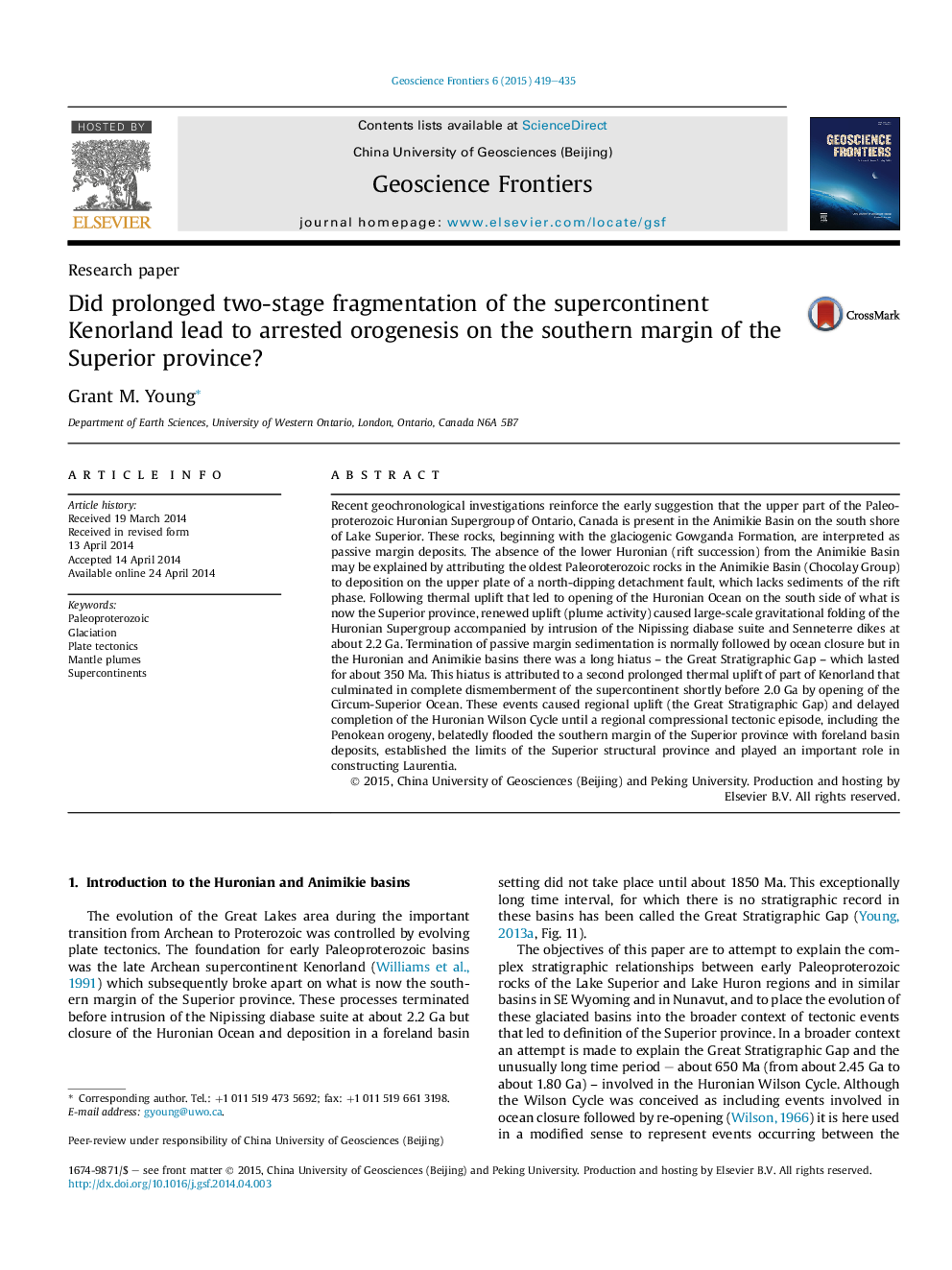 • The detachment fault model can explain stratigraphical relations between the Huronian and Animikie basins.
• The lengthy Huronian Wilson Cycle (600 Ma) is due to two-phase break-up of Kenorland.
• The Penokean orogeny is part of a regional event that defined the Superior province and amalgamated Laurentia.

Recent geochronological investigations reinforce the early suggestion that the upper part of the Paleoproterozoic Huronian Supergroup of Ontario, Canada is present in the Animikie Basin on the south shore of Lake Superior. These rocks, beginning with the glaciogenic Gowganda Formation, are interpreted as passive margin deposits. The absence of the lower Huronian (rift succession) from the Animikie Basin may be explained by attributing the oldest Paleoroterozoic rocks in the Animikie Basin (Chocolay Group) to deposition on the upper plate of a north-dipping detachment fault, which lacks sediments of the rift phase. Following thermal uplift that led to opening of the Huronian Ocean on the south side of what is now the Superior province, renewed uplift (plume activity) caused large-scale gravitational folding of the Huronian Supergroup accompanied by intrusion of the Nipissing diabase suite and Senneterre dikes at about 2.2 Ga. Termination of passive margin sedimentation is normally followed by ocean closure but in the Huronian and Animikie basins there was a long hiatus -- the Great Stratigraphic Gap -- which lasted for about 350 Ma. This hiatus is attributed to a second prolonged thermal uplift of part of Kenorland that culminated in complete dismemberment of the supercontinent shortly before 2.0 Ga by opening of the Circum-Superior Ocean. These events caused regional uplift (the Great Stratigraphic Gap) and delayed completion of the Huronian Wilson Cycle until a regional compressional tectonic episode, including the Penokean orogeny, belatedly flooded the southern margin of the Superior province with foreland basin deposits, established the limits of the Superior structural province and played an important role in constructing Laurentia.