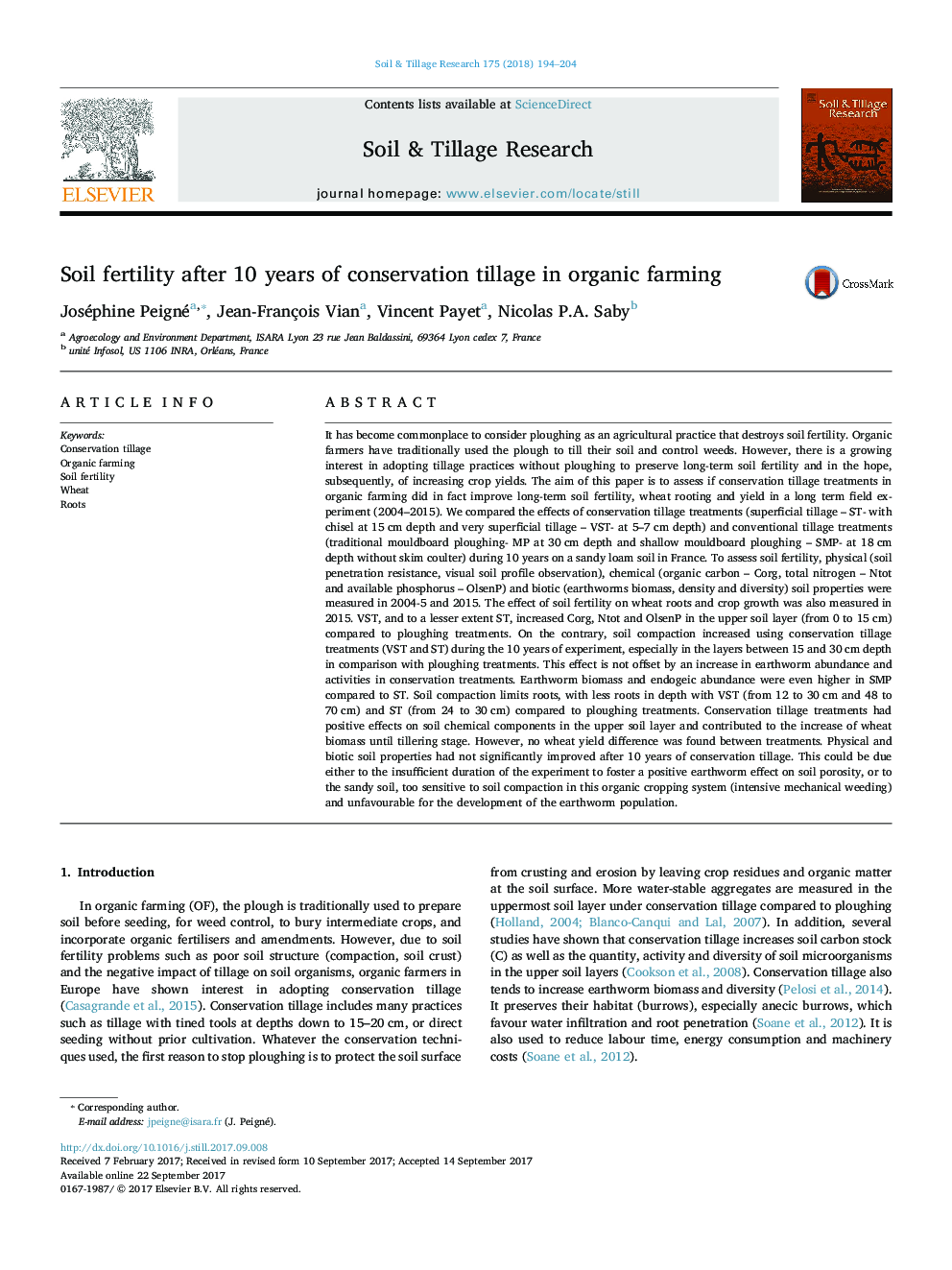 It has become commonplace to consider ploughing as an agricultural practice that destroys soil fertility. Organic farmers have traditionally used the plough to till their soil and control weeds. However, there is a growing interest in adopting tillage practices without ploughing to preserve long-term soil fertility and in the hope, subsequently, of increasing crop yields. The aim of this paper is to assess if conservation tillage treatments in organic farming did in fact improve long-term soil fertility, wheat rooting and yield in a long term field experiment (2004-2015). We compared the effects of conservation tillage treatments (superficial tillage - ST- with chisel at 15Â cm depth and very superficial tillage - VST- at 5-7Â cm depth) and conventional tillage treatments (traditional mouldboard ploughing- MP at 30Â cm depth and shallow mouldboard ploughing - SMP- at 18Â cm depth without skim coulter) during 10 years on a sandy loam soil in France. To assess soil fertility, physical (soil penetration resistance, visual soil profile observation), chemical (organic carbon - Corg, total nitrogen - Ntot and available phosphorus - OlsenP) and biotic (earthworms biomass, density and diversity) soil properties were measured in 2004-5 and 2015. The effect of soil fertility on wheat roots and crop growth was also measured in 2015. VST, and to a lesser extent ST, increased Corg, Ntot and OlsenP in the upper soil layer (from 0 to 15Â cm) compared to ploughing treatments. On the contrary, soil compaction increased using conservation tillage treatments (VST and ST) during the 10 years of experiment, especially in the layers between 15 and 30Â cm depth in comparison with ploughing treatments. This effect is not offset by an increase in earthworm abundance and activities in conservation treatments. Earthworm biomass and endogeic abundance were even higher in SMP compared to ST. Soil compaction limits roots, with less roots in depth with VST (from 12 to 30Â cm and 48 to 70Â cm) and ST (from 24 to 30Â cm) compared to ploughing treatments. Conservation tillage treatments had positive effects on soil chemical components in the upper soil layer and contributed to the increase of wheat biomass until tillering stage. However, no wheat yield difference was found between treatments. Physical and biotic soil properties had not significantly improved after 10 years of conservation tillage. This could be due either to the insufficient duration of the experiment to foster a positive earthworm effect on soil porosity, or to the sandy soil, too sensitive to soil compaction in this organic cropping system (intensive mechanical weeding) and unfavourable for the development of the earthworm population.