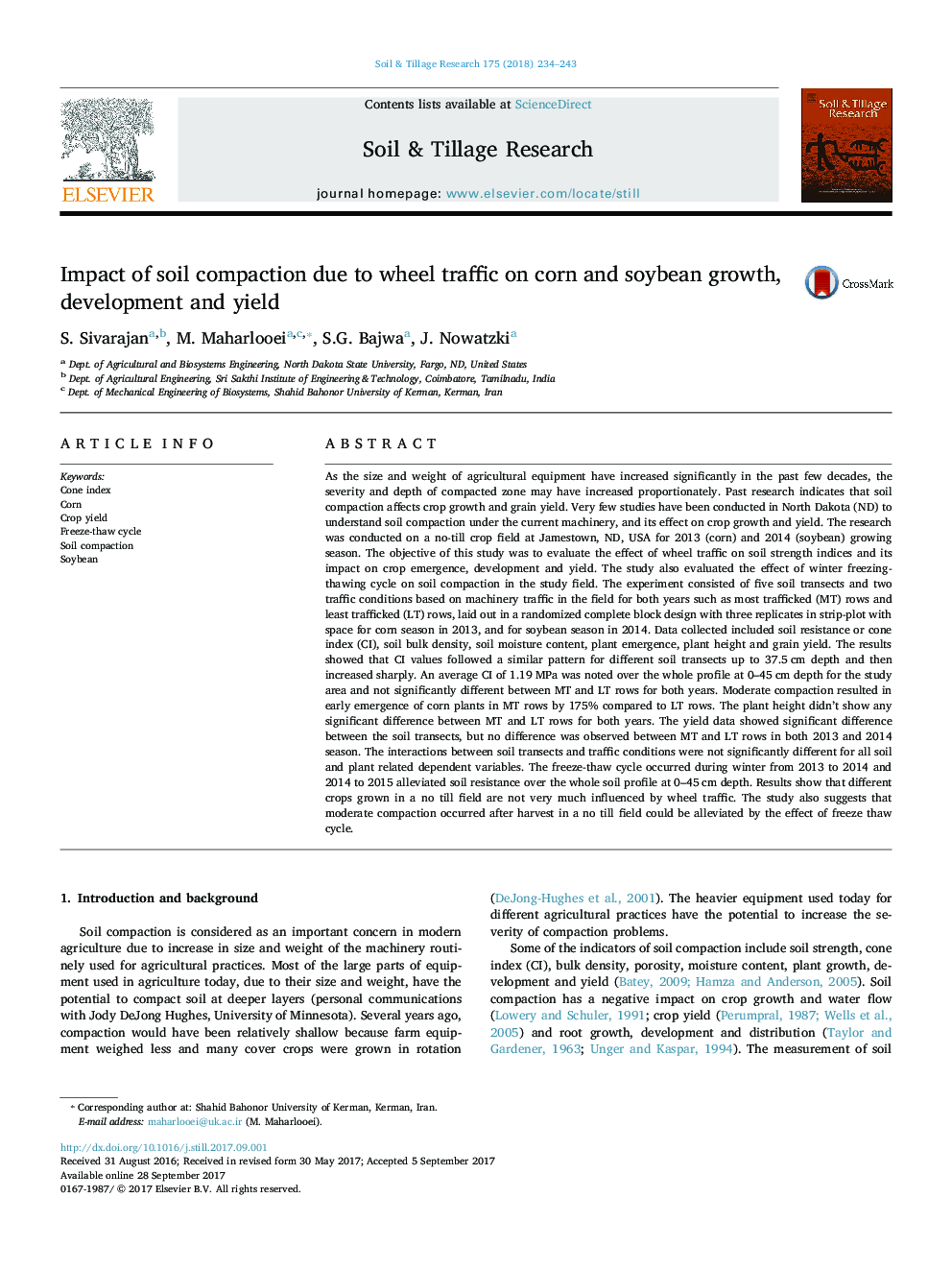 As the size and weight of agricultural equipment have increased significantly in the past few decades, the severity and depth of compacted zone may have increased proportionately. Past research indicates that soil compaction affects crop growth and grain yield. Very few studies have been conducted in North Dakota (ND) to understand soil compaction under the current machinery, and its effect on crop growth and yield. The research was conducted on a no-till crop field at Jamestown, ND, USA for 2013 (corn) and 2014 (soybean) growing season. The objective of this study was to evaluate the effect of wheel traffic on soil strength indices and its impact on crop emergence, development and yield. The study also evaluated the effect of winter freezing-thawing cycle on soil compaction in the study field. The experiment consisted of five soil transects and two traffic conditions based on machinery traffic in the field for both years such as most trafficked (MT) rows and least trafficked (LT) rows, laid out in a randomized complete block design with three replicates in strip-plot with space for corn season in 2013, and for soybean season in 2014. Data collected included soil resistance or cone index (CI), soil bulk density, soil moisture content, plant emergence, plant height and grain yield. The results showed that CI values followed a similar pattern for different soil transects up to 37.5Â cm depth and then increased sharply. An average CI of 1.19Â MPa was noted over the whole profile at 0-45Â cm depth for the study area and not significantly different between MT and LT rows for both years. Moderate compaction resulted in early emergence of corn plants in MT rows by 175% compared to LT rows. The plant height didn't show any significant difference between MT and LT rows for both years. The yield data showed significant difference between the soil transects, but no difference was observed between MT and LT rows in both 2013 and 2014 season. The interactions between soil transects and traffic conditions were not significantly different for all soil and plant related dependent variables. The freeze-thaw cycle occurred during winter from 2013 to 2014 and 2014 to 2015 alleviated soil resistance over the whole soil profile at 0-45Â cm depth. Results show that different crops grown in a no till field are not very much influenced by wheel traffic. The study also suggests that moderate compaction occurred after harvest in a no till field could be alleviated by the effect of freeze thaw cycle.