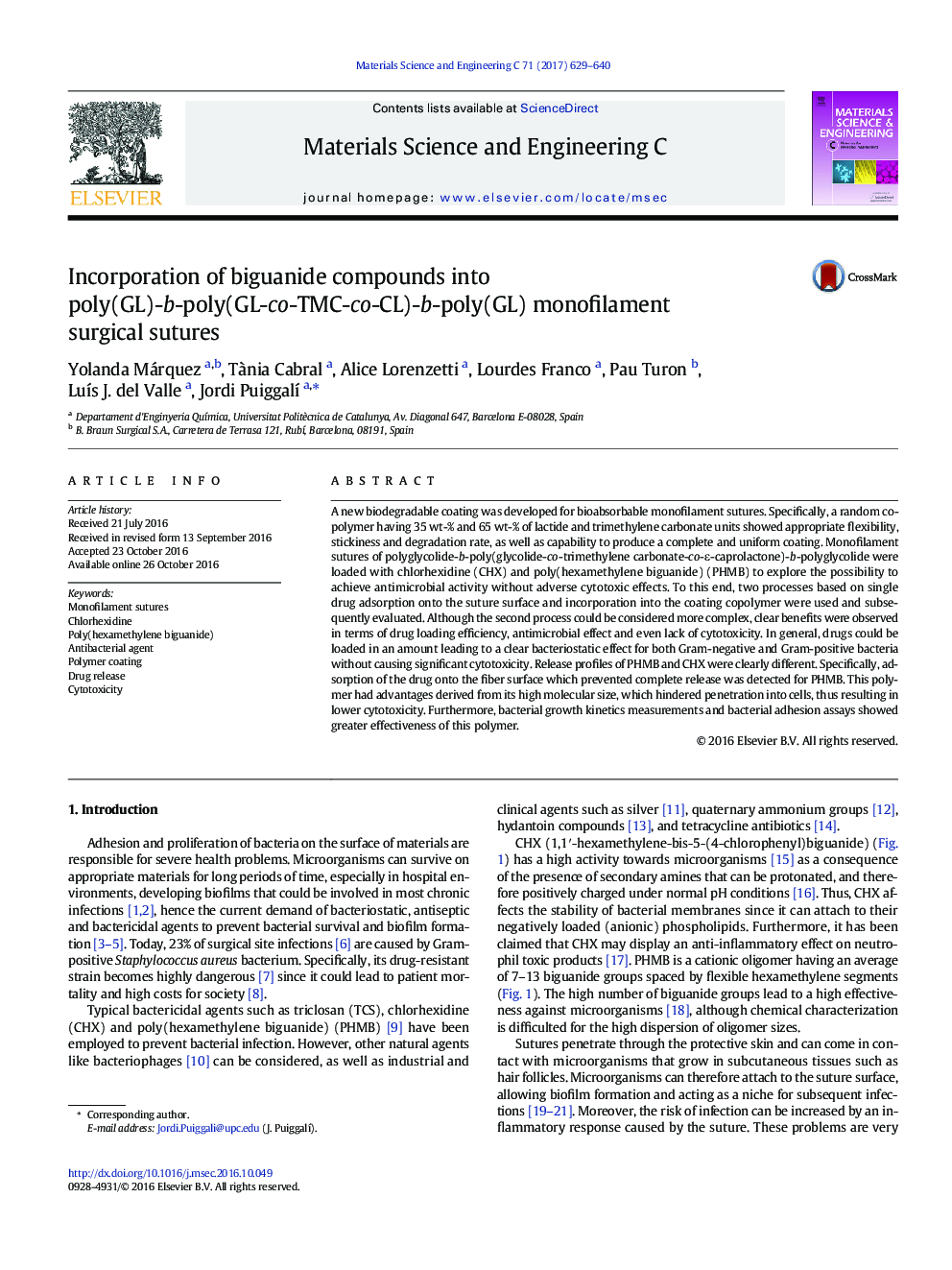 - A new appropriate coating copolymer for monofilament sutures has been synthesized.
- The coating polymer can be effectively loaded with biocides of different size.
- The release behavior and bactericide activity depended on the drug molecular size.
- The use of a coating copolymer shows advantages to load drug compounds.
- Loaded sutures can show a bacteriostatic effect and a low in-vitro cytotoxicity.

A new biodegradable coating was developed for bioabsorbable monofilament sutures. Specifically, a random copolymer having 35Â wt-% and 65Â wt-% of lactide and trimethylene carbonate units showed appropriate flexibility, stickiness and degradation rate, as well as capability to produce a complete and uniform coating. Monofilament sutures of polyglycolide-b-poly(glycolide-co-trimethylene carbonate-co-Îµ-caprolactone)-b-polyglycolide were loaded with chlorhexidine (CHX) and poly(hexamethylene biguanide) (PHMB) to explore the possibility to achieve antimicrobial activity without adverse cytotoxic effects. To this end, two processes based on single drug adsorption onto the suture surface and incorporation into the coating copolymer were used and subsequently evaluated. Although the second process could be considered more complex, clear benefits were observed in terms of drug loading efficiency, antimicrobial effect and even lack of cytotoxicity. In general, drugs could be loaded in an amount leading to a clear bacteriostatic effect for both Gram-negative and Gram-positive bacteria without causing significant cytotoxicity. Release profiles of PHMB and CHX were clearly different. Specifically, adsorption of the drug onto the fiber surface which prevented complete release was detected for PHMB. This polymer had advantages derived from its high molecular size, which hindered penetration into cells, thus resulting in lower cytotoxicity. Furthermore, bacterial growth kinetics measurements and bacterial adhesion assays showed greater effectiveness of this polymer.