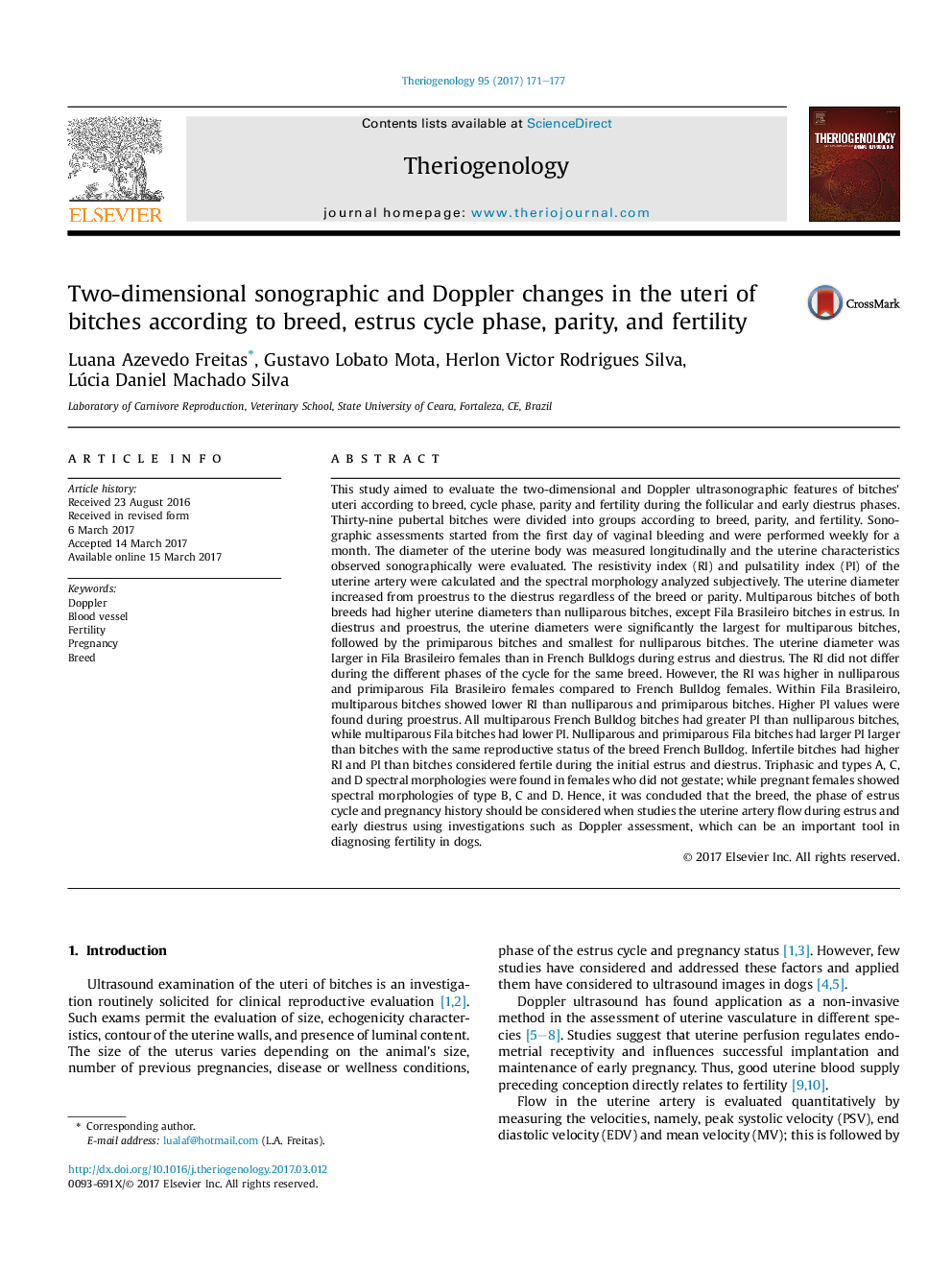 This study aimed to evaluate the two-dimensional and Doppler ultrasonographic features of bitches' uteri according to breed, cycle phase, parity and fertility during the follicular and early diestrus phases. Thirty-nine pubertal bitches were divided into groups according to breed, parity, and fertility. Sonographic assessments started from the first day of vaginal bleeding and were performed weekly for a month. The diameter of the uterine body was measured longitudinally and the uterine characteristics observed sonographically were evaluated. The resistivity index (RI) and pulsatility index (PI) of the uterine artery were calculated and the spectral morphology analyzed subjectively. The uterine diameter increased from proestrus to the diestrus regardless of the breed or parity. Multiparous bitches of both breeds had higher uterine diameters than nulliparous bitches, except Fila Brasileiro bitches in estrus. In diestrus and proestrus, the uterine diameters were significantly the largest for multiparous bitches, followed by the primiparous bitches and smallest for nulliparous bitches. The uterine diameter was larger in Fila Brasileiro females than in French Bulldogs during estrus and diestrus. The RI did not differ during the different phases of the cycle for the same breed. However, the RI was higher in nulliparous and primiparous Fila Brasileiro females compared to French Bulldog females. Within Fila Brasileiro, multiparous bitches showed lower RI than nulliparous and primiparous bitches. Higher PI values were found during proestrus. All multiparous French Bulldog bitches had greater PI than nulliparous bitches, while multiparous Fila bitches had lower PI. Nulliparous and primiparous Fila bitches had larger PI larger than bitches with the same reproductive status of the breed French Bulldog. Infertile bitches had higher RI and PI than bitches considered fertile during the initial estrus and diestrus. Triphasic and types A, C, and D spectral morphologies were found in females who did not gestate; while pregnant females showed spectral morphologies of type B, C and D. Hence, it was concluded that the breed, the phase of estrus cycle and pregnancy history should be considered when studies the uterine artery flow during estrus and early diestrus using investigations such as Doppler assessment, which can be an important tool in diagnosing fertility in dogs.