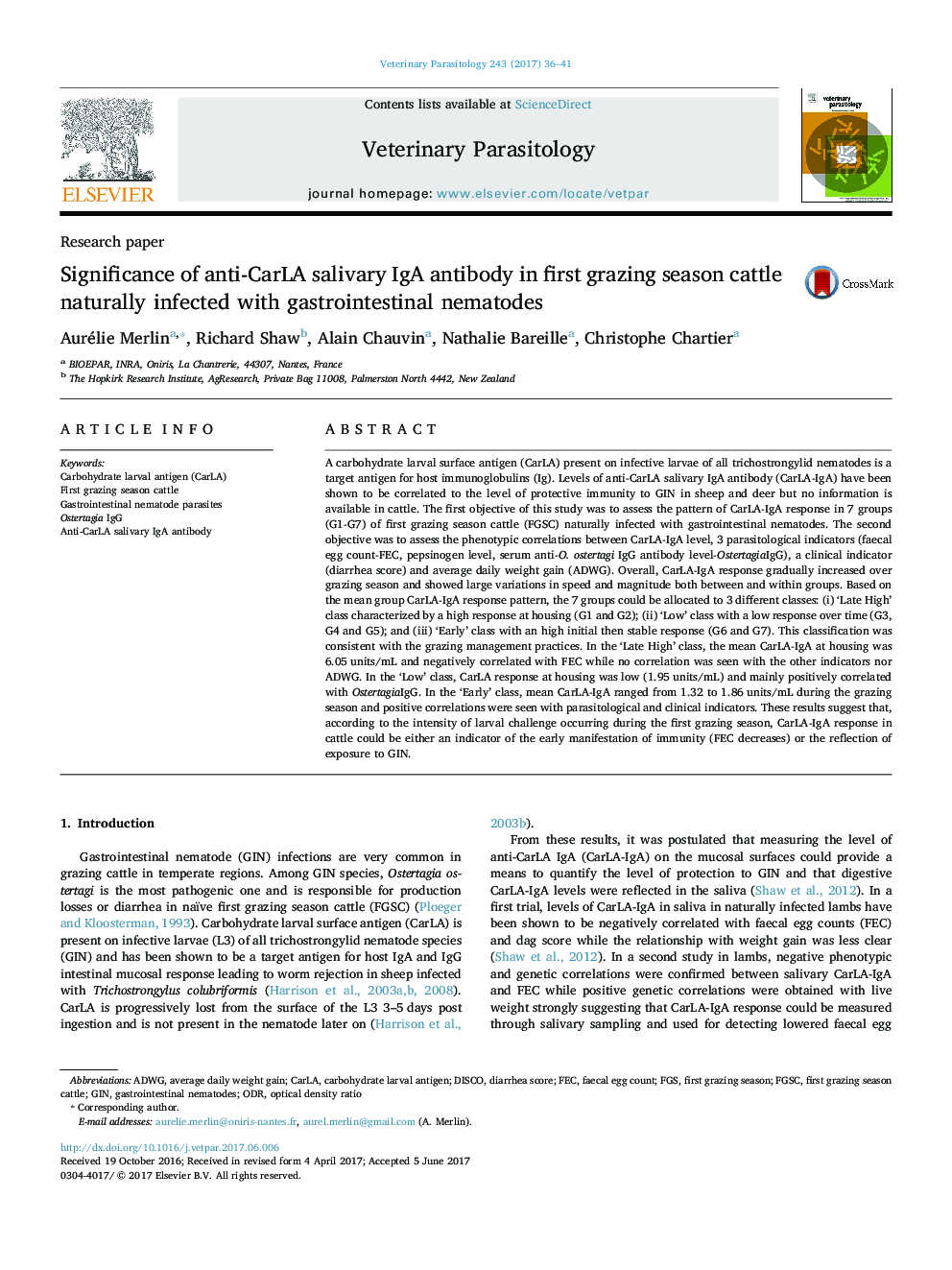 - Gastrointestinal nematodes (GIN) can cause growth retardations in heifers.
- A carbohydrate larval surface antigen (CarLA) presenting on GIN is a target for host IgA.
- The significance of anti-CarLA salivary IgA was assessed in 7 groups of heifers.
- Under low larval challenge during the season, CarLA-IgA could reflect the exposure to GIN.
- In highly exposed groups to GIN, CarLA-IgA response could reflect the immunity development.

A carbohydrate larval surface antigen (CarLA) present on infective larvae of all trichostrongylid nematodes is a target antigen for host immunoglobulins (Ig). Levels of anti-CarLA salivary IgA antibody (CarLA-IgA) have been shown to be correlated to the level of protective immunity to GIN in sheep and deer but no information is available in cattle. The first objective of this study was to assess the pattern of CarLA-IgA response in 7 groups (G1-G7) of first grazing season cattle (FGSC) naturally infected with gastrointestinal nematodes. The second objective was to assess the phenotypic correlations between CarLA-IgA level, 3 parasitological indicators (faecal egg count-FEC, pepsinogen level, serum anti-O. ostertagi IgG antibody level-OstertagiaIgG), a clinical indicator (diarrhea score) and average daily weight gain (ADWG). Overall, CarLA-IgA response gradually increased over grazing season and showed large variations in speed and magnitude both between and within groups. Based on the mean group CarLA-IgA response pattern, the 7 groups could be allocated to 3 different classes: (i) 'Late High' class characterized by a high response at housing (G1 and G2); (ii) 'Low' class with a low response over time (G3, G4 and G5); and (iii) 'Early' class with an high initial then stable response (G6 and G7). This classification was consistent with the grazing management practices. In the 'Late High' class, the mean CarLA-IgA at housing was 6.05Â units/mL and negatively correlated with FEC while no correlation was seen with the other indicators nor ADWG. In the 'Low' class, CarLA response at housing was low (1.95Â units/mL) and mainly positively correlated with OstertagiaIgG. In the 'Early' class, mean CarLA-IgA ranged from 1.32 to 1.86Â units/mL during the grazing season and positive correlations were seen with parasitological and clinical indicators. These results suggest that, according to the intensity of larval challenge occurring during the first grazing season, CarLA-IgA response in cattle could be either an indicator of the early manifestation of immunity (FEC decreases) or the reflection of exposure to GIN.