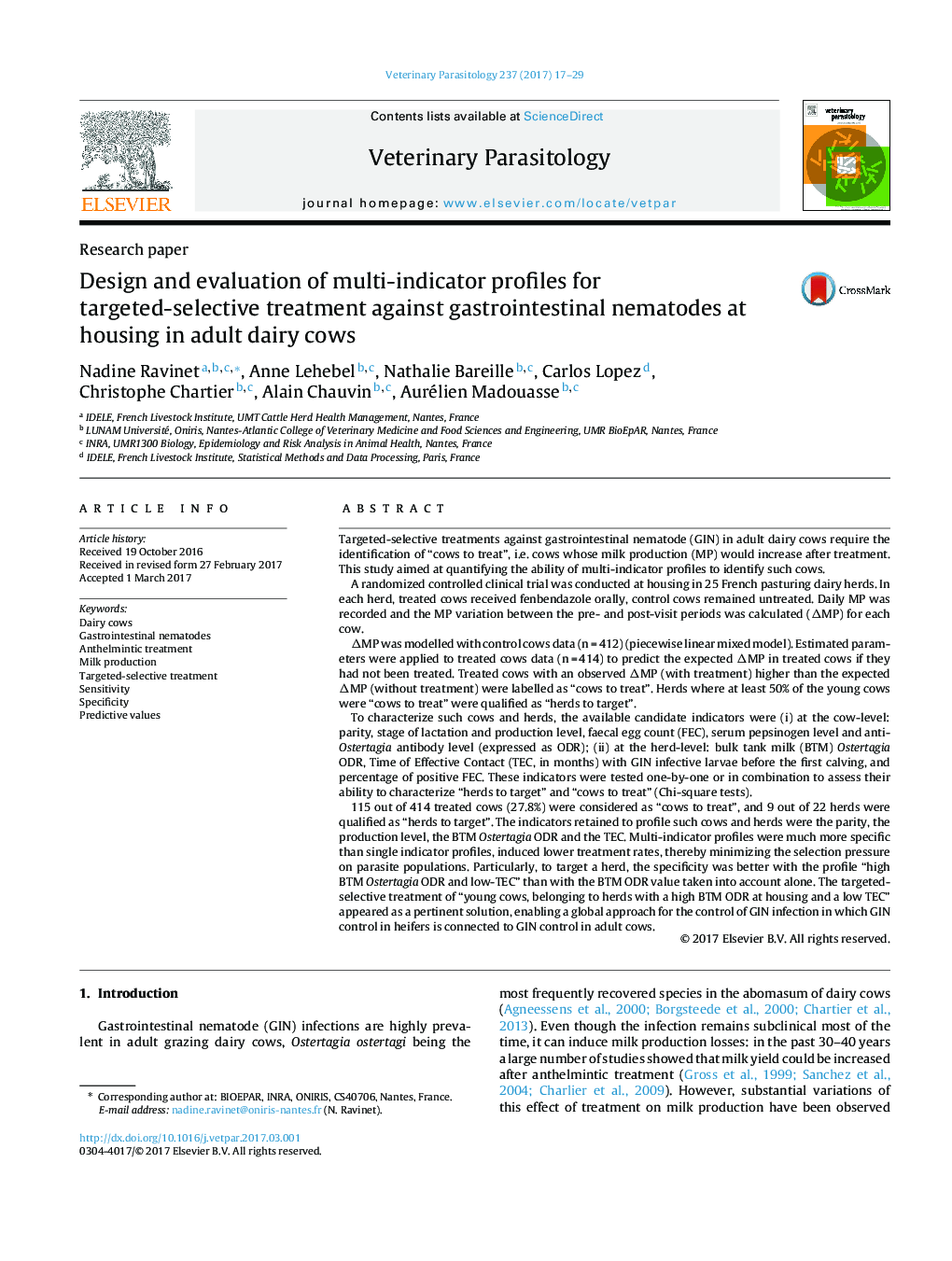 - Development of an original approach to identify responding cows after anthelmintic treatment.
- Design and assessment of multi-indicator profiles characterizing such cows.
- Estimation of the treatment rate (refugia size) associated with the use of different profiles.

Targeted-selective treatments against gastrointestinal nematode (GIN) in adult dairy cows require the identification of “cows to treat”, i.e. cows whose milk production (MP) would increase after treatment. This study aimed at quantifying the ability of multi-indicator profiles to identify such cows.A randomized controlled clinical trial was conducted at housing in 25 French pasturing dairy herds. In each herd, treated cows received fenbendazole orally, control cows remained untreated. Daily MP was recorded and the MP variation between the pre- and post-visit periods was calculated (ÎMP) for each cow.ÎMP was modelled with control cows data (nÂ =Â 412) (piecewise linear mixed model). Estimated parameters were applied to treated cows data (nÂ =Â 414) to predict the expected ÎMP in treated cows if they had not been treated. Treated cows with an observed ÎMP (with treatment) higher than the expected ÎMP (without treatment) were labelled as “cows to treat”. Herds where at least 50% of the young cows were “cows to treat” were qualified as “herds to target”.To characterize such cows and herds, the available candidate indicators were (i) at the cow-level: parity, stage of lactation and production level, faecal egg count (FEC), serum pepsinogen level and anti-Ostertagia antibody level (expressed as ODR); (ii) at the herd-level: bulk tank milk (BTM) Ostertagia ODR, Time of Effective Contact (TEC, in months) with GIN infective larvae before the first calving, and percentage of positive FEC. These indicators were tested one-by-one or in combination to assess their ability to characterize “herds to target” and “cows to treat” (Chi-square tests).115 out of 414 treated cows (27.8%) were considered as “cows to treat”, and 9 out of 22 herds were qualified as “herds to target”. The indicators retained to profile such cows and herds were the parity, the production level, the BTM Ostertagia ODR and the TEC. Multi-indicator profiles were much more specific than single indicator profiles, induced lower treatment rates, thereby minimizing the selection pressure on parasite populations. Particularly, to target a herd, the specificity was better with the profile “high BTM Ostertagia ODR and low-TEC” than with the BTM ODR value taken into account alone. The targeted-selective treatment of “young cows, belonging to herds with a high BTM ODR at housing and a low TEC” appeared as a pertinent solution, enabling a global approach for the control of GIN infection in which GIN control in heifers is connected to GIN control in adult cows.