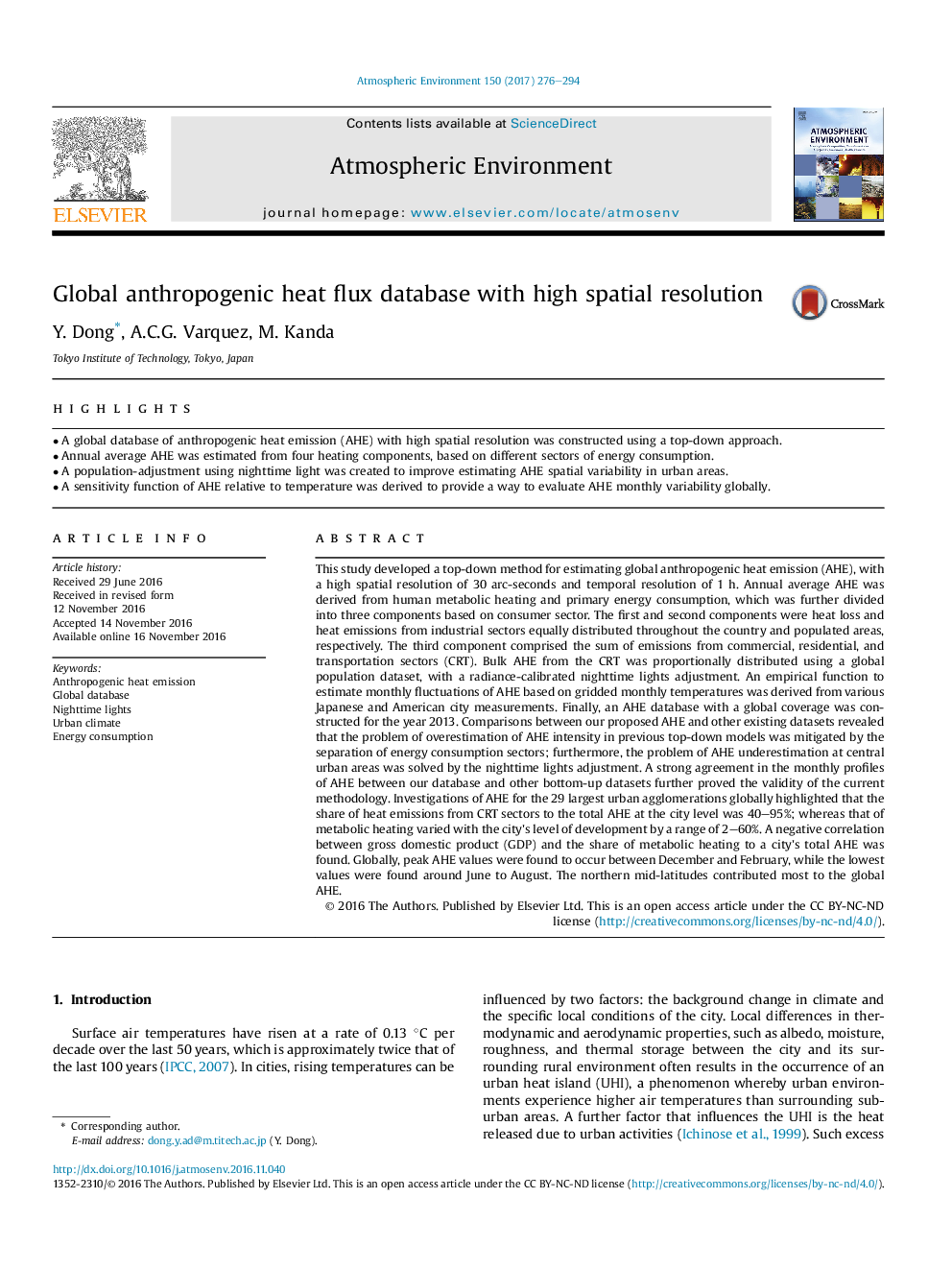 - A global database of anthropogenic heat emission (AHE) with high spatial resolution was constructed using a top-down approach.
- Annual average AHE was estimated from four heating components, based on different sectors of energy consumption.
- A population-adjustment using nighttime light was created to improve estimating AHE spatial variability in urban areas.
- A sensitivity function of AHE relative to temperature was derived to provide a way to evaluate AHE monthly variability globally.

This study developed a top-down method for estimating global anthropogenic heat emission (AHE), with a high spatial resolution of 30 arc-seconds and temporal resolution of 1Â h. Annual average AHE was derived from human metabolic heating and primary energy consumption, which was further divided into three components based on consumer sector. The first and second components were heat loss and heat emissions from industrial sectors equally distributed throughout the country and populated areas, respectively. The third component comprised the sum of emissions from commercial, residential, and transportation sectors (CRT). Bulk AHE from the CRT was proportionally distributed using a global population dataset, with a radiance-calibrated nighttime lights adjustment. An empirical function to estimate monthly fluctuations of AHE based on gridded monthly temperatures was derived from various Japanese and American city measurements. Finally, an AHE database with a global coverage was constructed for the year 2013. Comparisons between our proposed AHE and other existing datasets revealed that the problem of overestimation of AHE intensity in previous top-down models was mitigated by the separation of energy consumption sectors; furthermore, the problem of AHE underestimation at central urban areas was solved by the nighttime lights adjustment. A strong agreement in the monthly profiles of AHE between our database and other bottom-up datasets further proved the validity of the current methodology. Investigations of AHE for the 29 largest urban agglomerations globally highlighted that the share of heat emissions from CRT sectors to the total AHE at the city level was 40-95%; whereas that of metabolic heating varied with the city's level of development by a range of 2-60%. A negative correlation between gross domestic product (GDP) and the share of metabolic heating to a city's total AHE was found. Globally, peak AHE values were found to occur between December and February, while the lowest values were found around June to August. The northern mid-latitudes contributed most to the global AHE.