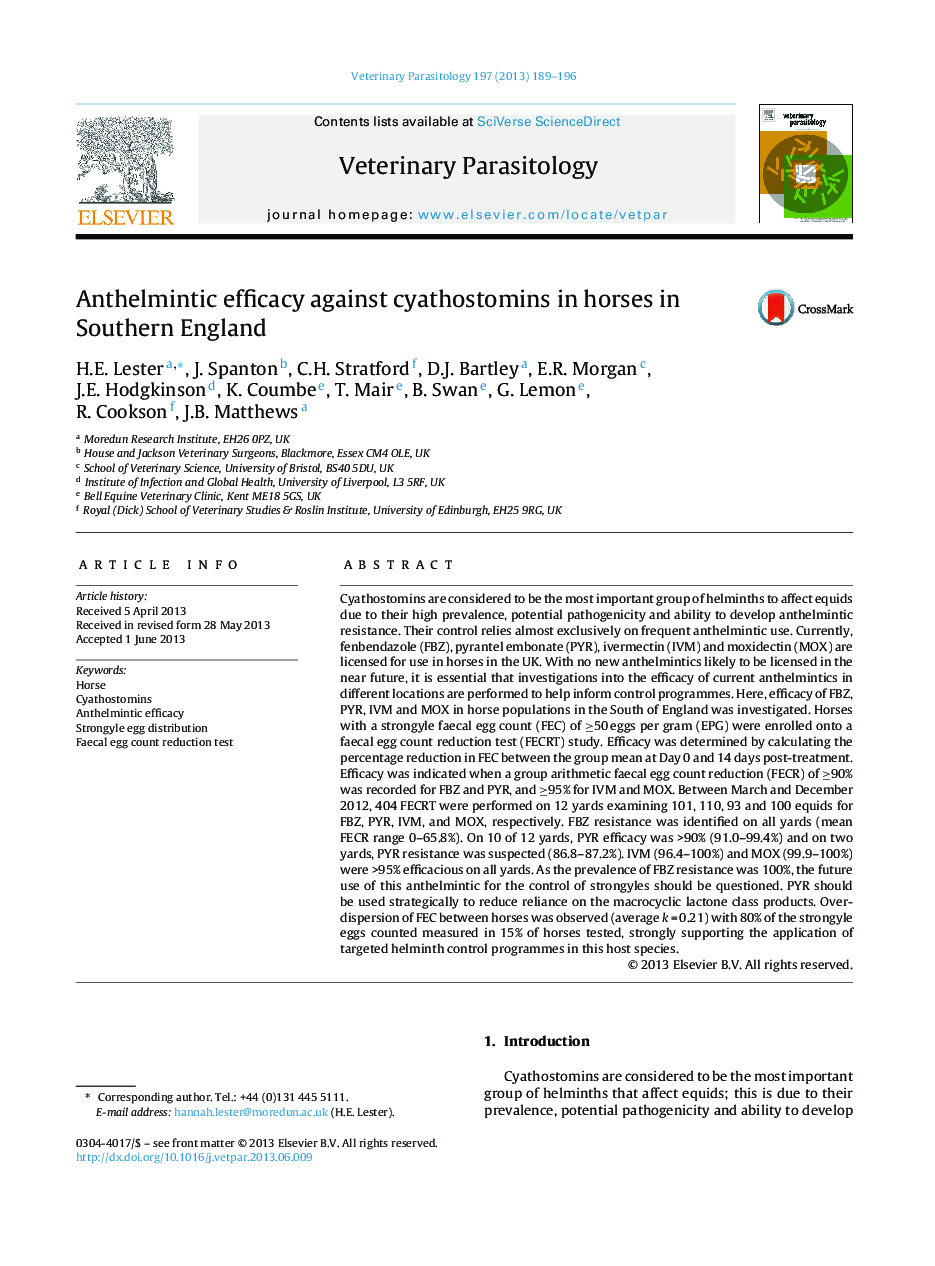 Cyathostomins are considered to be the most important group of helminths to affect equids due to their high prevalence, potential pathogenicity and ability to develop anthelmintic resistance. Their control relies almost exclusively on frequent anthelmintic use. Currently, fenbendazole (FBZ), pyrantel embonate (PYR), ivermectin (IVM) and moxidectin (MOX) are licensed for use in horses in the UK. With no new anthelmintics likely to be licensed in the near future, it is essential that investigations into the efficacy of current anthelmintics in different locations are performed to help inform control programmes. Here, efficacy of FBZ, PYR, IVM and MOX in horse populations in the South of England was investigated. Horses with a strongyle faecal egg count (FEC) of â¥50Â eggs per gram (EPG) were enrolled onto a faecal egg count reduction test (FECRT) study. Efficacy was determined by calculating the percentage reduction in FEC between the group mean at Day 0 and 14 days post-treatment. Efficacy was indicated when a group arithmetic faecal egg count reduction (FECR) of â¥90% was recorded for FBZ and PYR, and â¥95% for IVM and MOX. Between March and December 2012, 404 FECRT were performed on 12 yards examining 101, 110, 93 and 100 equids for FBZ, PYR, IVM, and MOX, respectively. FBZ resistance was identified on all yards (mean FECR range 0-65.8%). On 10 of 12 yards, PYR efficacy was >90% (91.0-99.4%) and on two yards, PYR resistance was suspected (86.8-87.2%). IVM (96.4-100%) and MOX (99.9-100%) were >95% efficacious on all yards. As the prevalence of FBZ resistance was 100%, the future use of this anthelmintic for the control of strongyles should be questioned. PYR should be used strategically to reduce reliance on the macrocyclic lactone class products. Over-dispersion of FEC between horses was observed (average kÂ =Â 0.21) with 80% of the strongyle eggs counted measured in 15% of horses tested, strongly supporting the application of targeted helminth control programmes in this host species.