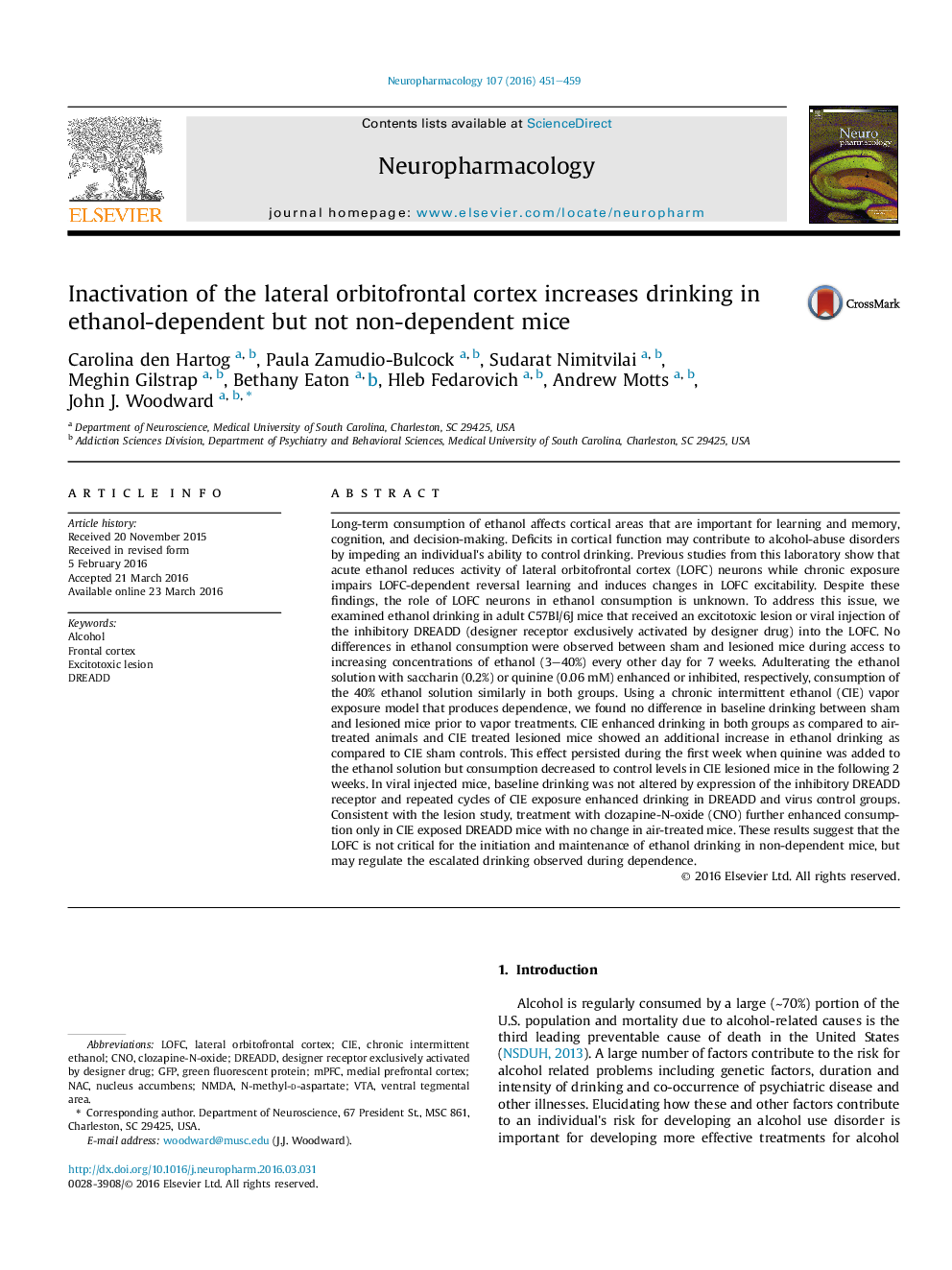 - The role of the lateral orbitofrontal cortex (LOFC) in ethanol drinking is examined.
- Excitotoxic lesions of the LOFC did not affect drinking in non-dependent mice.
- In alcohol-dependent mice, lesioned mice drank more ethanol.
- A similar effect was observed in mice expressing an inhibitory DREADD receptor in the LOFC.
- LOFC dysfunction may be one factor driving excessive alcohol consumption.

Long-term consumption of ethanol affects cortical areas that are important for learning and memory, cognition, and decision-making. Deficits in cortical function may contribute to alcohol-abuse disorders by impeding an individual's ability to control drinking. Previous studies from this laboratory show that acute ethanol reduces activity of lateral orbitofrontal cortex (LOFC) neurons while chronic exposure impairs LOFC-dependent reversal learning and induces changes in LOFC excitability. Despite these findings, the role of LOFC neurons in ethanol consumption is unknown. To address this issue, we examined ethanol drinking in adult C57Bl/6J mice that received an excitotoxic lesion or viral injection of the inhibitory DREADD (designer receptor exclusively activated by designer drug) into the LOFC. No differences in ethanol consumption were observed between sham and lesioned mice during access to increasing concentrations of ethanol (3-40%) every other day for 7 weeks. Adulterating the ethanol solution with saccharin (0.2%) or quinine (0.06Â mM) enhanced or inhibited, respectively, consumption of the 40% ethanol solution similarly in both groups. Using a chronic intermittent ethanol (CIE) vapor exposure model that produces dependence, we found no difference in baseline drinking between sham and lesioned mice prior to vapor treatments. CIE enhanced drinking in both groups as compared to air-treated animals and CIE treated lesioned mice showed an additional increase in ethanol drinking as compared to CIE sham controls. This effect persisted during the first week when quinine was added to the ethanol solution but consumption decreased to control levels in CIE lesioned mice in the following 2 weeks. In viral injected mice, baseline drinking was not altered by expression of the inhibitory DREADD receptor and repeated cycles of CIE exposure enhanced drinking in DREADD and virus control groups. Consistent with the lesion study, treatment with clozapine-N-oxide (CNO) further enhanced consumption only in CIE exposed DREADD mice with no change in air-treated mice. These results suggest that the LOFC is not critical for the initiation and maintenance of ethanol drinking in non-dependent mice, but may regulate the escalated drinking observed during dependence.