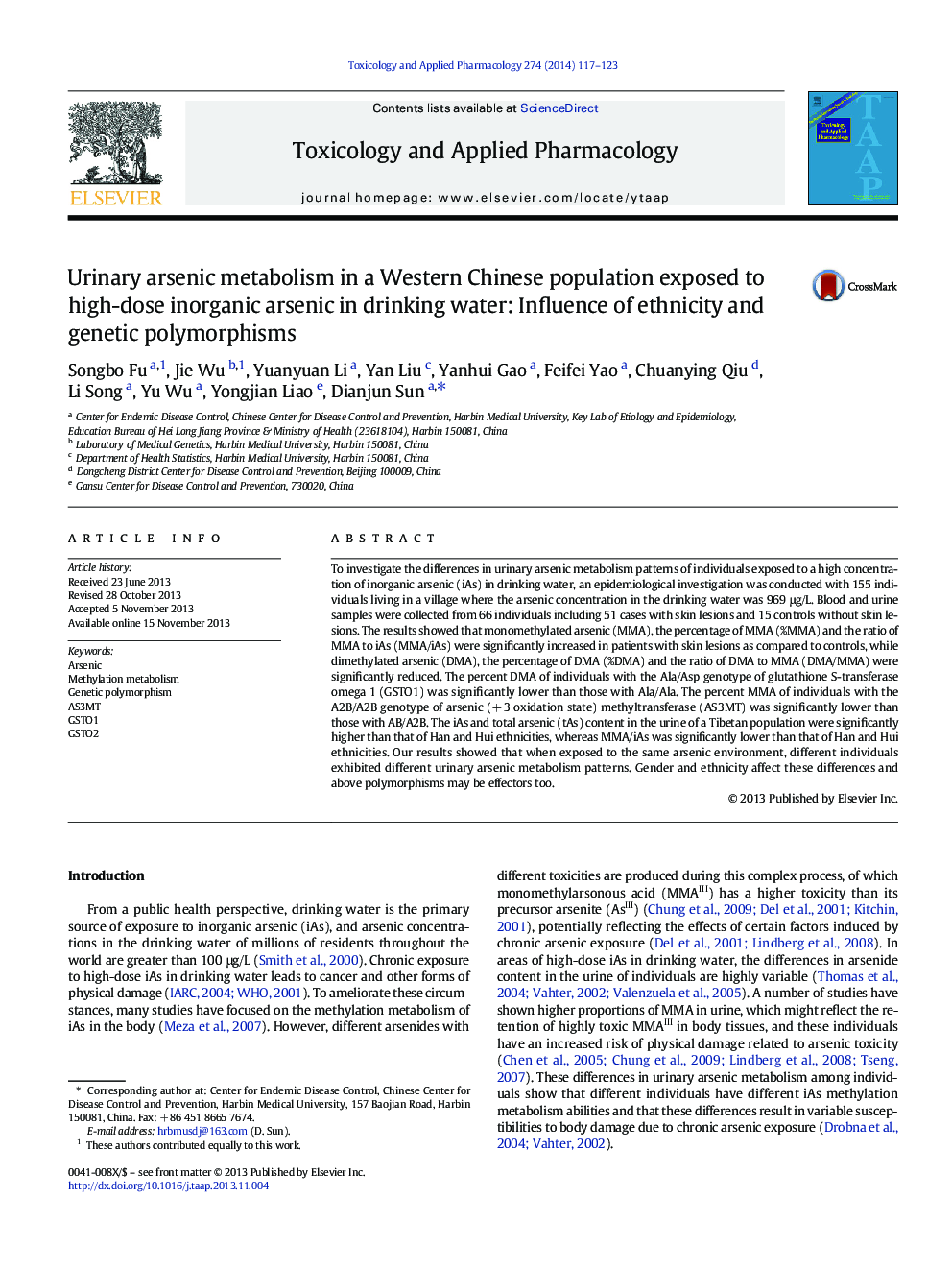 - We first survey a village with high iAs content in the drinking water (969Â Î¼g/L).
- 90 villagers suffered typical skin lesions with a morbidity rate of 58%.
- Cases exhibited higher %MMA and MMA/iAs, and lower %DMA and DMA/MMA than controls.
- Gender and ethnicity affect the differences of iAs methylation metabolism levels.
- GSTO1 and AS3MT gene polymorphisms may be factors too.

To investigate the differences in urinary arsenic metabolism patterns of individuals exposed to a high concentration of inorganic arsenic (iAs) in drinking water, an epidemiological investigation was conducted with 155 individuals living in a village where the arsenic concentration in the drinking water was 969Â Î¼g/L. Blood and urine samples were collected from 66 individuals including 51 cases with skin lesions and 15 controls without skin lesions. The results showed that monomethylated arsenic (MMA), the percentage of MMA (%MMA) and the ratio of MMA to iAs (MMA/iAs) were significantly increased in patients with skin lesions as compared to controls, while dimethylated arsenic (DMA), the percentage of DMA (%DMA) and the ratio of DMA to MMA (DMA/MMA) were significantly reduced. The percent DMA of individuals with the Ala/Asp genotype of glutathione S-transferase omega 1 (GSTO1) was significantly lower than those with Ala/Ala. The percent MMA of individuals with the A2B/A2B genotype of arsenic (+Â 3 oxidation state) methyltransferase (AS3MT) was significantly lower than those with AB/A2B. The iAs and total arsenic (tAs) content in the urine of a Tibetan population were significantly higher than that of Han and Hui ethnicities, whereas MMA/iAs was significantly lower than that of Han and Hui ethnicities. Our results showed that when exposed to the same arsenic environment, different individuals exhibited different urinary arsenic metabolism patterns. Gender and ethnicity affect these differences and above polymorphisms may be effectors too.