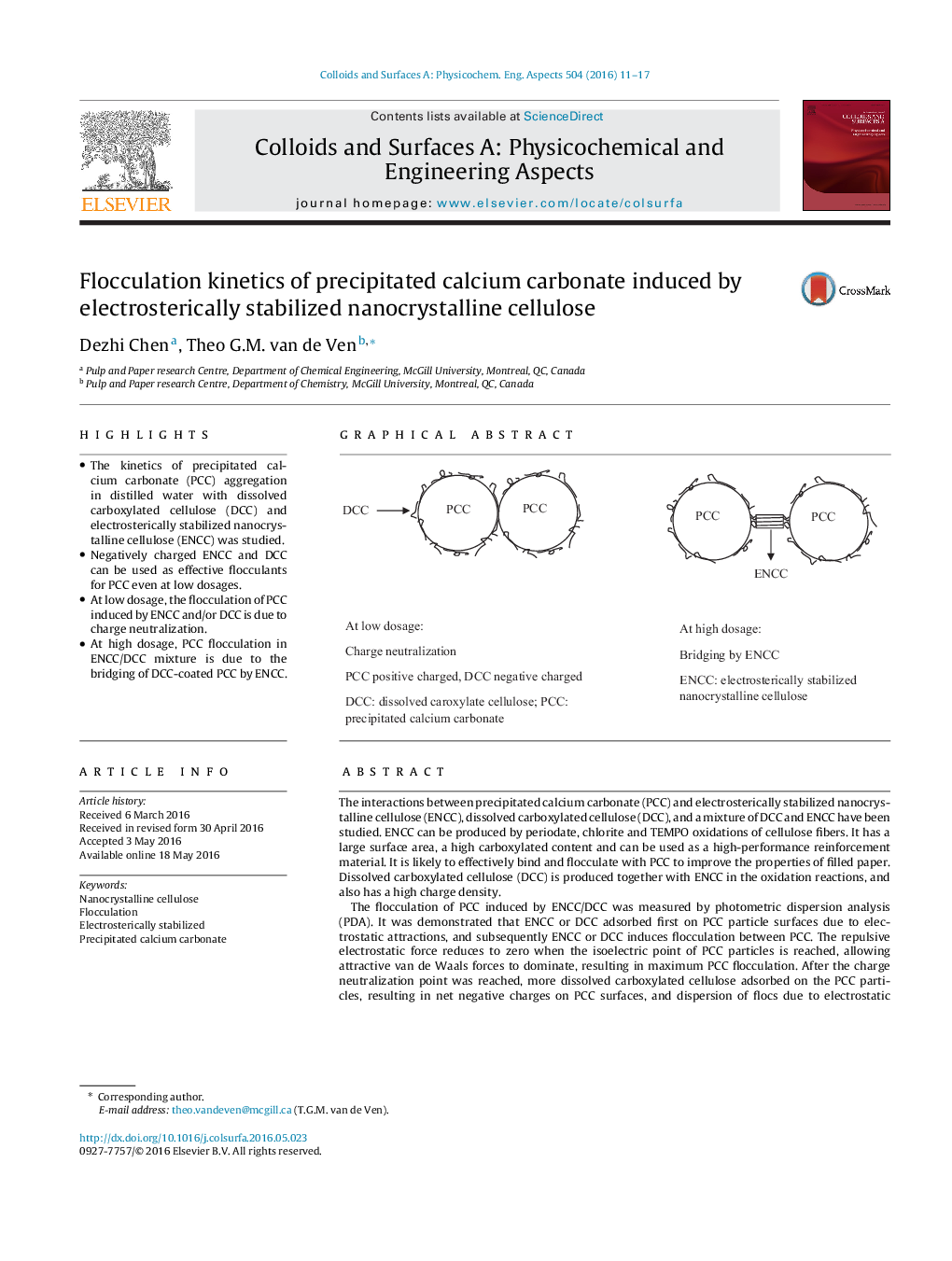 • The kinetics of precipitated calcium carbonate (PCC) aggregation in distilled water with dissolved carboxylated cellulose (DCC) and electrosterically stabilized nanocrystalline cellulose (ENCC) was studied.
• Negatively charged ENCC and DCC can be used as effective flocculants for PCC even at low dosages.
• At low dosage, the flocculation of PCC induced by ENCC and/or DCC is due to charge neutralization.
• At high dosage, PCC flocculation in ENCC/DCC mixture is due to the bridging of DCC-coated PCC by ENCC.

The interactions between precipitated calcium carbonate (PCC) and electrosterically stabilized nanocrystalline cellulose (ENCC), dissolved carboxylated cellulose (DCC), and a mixture of DCC and ENCC have been studied. ENCC can be produced by periodate, chlorite and TEMPO oxidations of cellulose fibers. It has a large surface area, a high carboxylated content and can be used as a high-performance reinforcement material. It is likely to effectively bind and flocculate with PCC to improve the properties of filled paper. Dissolved carboxylated cellulose (DCC) is produced together with ENCC in the oxidation reactions, and also has a high charge density.The flocculation of PCC induced by ENCC/DCC was measured by photometric dispersion analysis (PDA). It was demonstrated that ENCC or DCC adsorbed first on PCC particle surfaces due to electrostatic attractions, and subsequently ENCC or DCC induces flocculation between PCC. The repulsive electrostatic force reduces to zero when the isoelectric point of PCC particles is reached, allowing attractive van de Waals forces to dominate, resulting in maximum PCC flocculation. After the charge neutralization point was reached, more dissolved carboxylated cellulose adsorbed on the PCC particles, resulting in net negative charges on PCC surfaces, and dispersion of flocs due to electrostatic repulsion. For mixtures of dissolved carboxylated cellulose (DCC) and ENCC, DCC adsorbed faster on PCC than ENCC. Excess ENCC resulted in the exchange of DCC with ENCC, with ENCC particles able to bridge PCC. This mechanism was proved by photometric dispersion analysis and dynamic light scattering experiments.