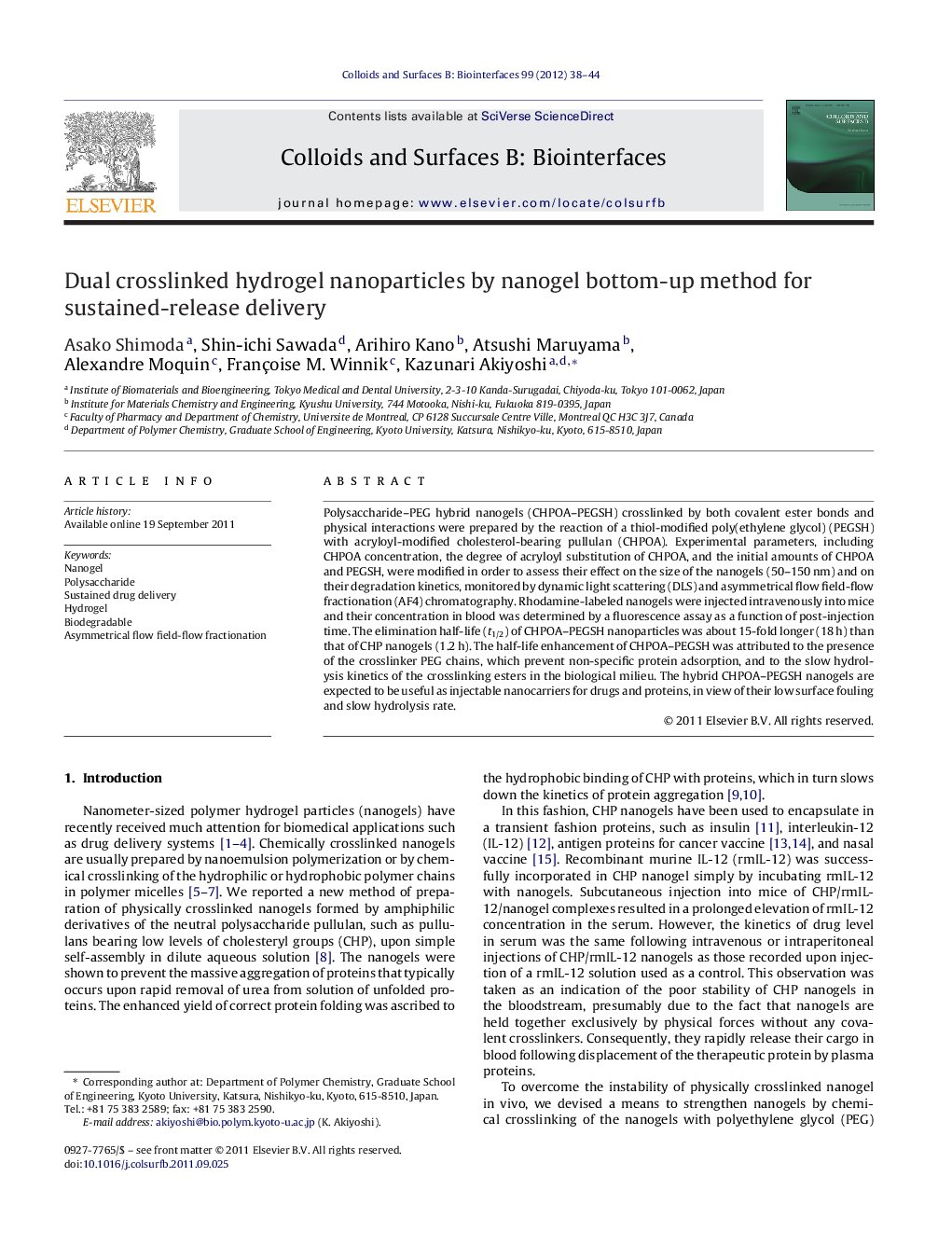 Polysaccharide–PEG hybrid nanogels (CHPOA–PEGSH) crosslinked by both covalent ester bonds and physical interactions were prepared by the reaction of a thiol-modified poly(ethylene glycol) (PEGSH) with acryloyl-modified cholesterol-bearing pullulan (CHPOA). Experimental parameters, including CHPOA concentration, the degree of acryloyl substitution of CHPOA, and the initial amounts of CHPOA and PEGSH, were modified in order to assess their effect on the size of the nanogels (50–150 nm) and on their degradation kinetics, monitored by dynamic light scattering (DLS) and asymmetrical flow field-flow fractionation (AF4) chromatography. Rhodamine-labeled nanogels were injected intravenously into mice and their concentration in blood was determined by a fluorescence assay as a function of post-injection time. The elimination half-life (t1/2) of CHPOA–PEGSH nanoparticles was about 15-fold longer (18 h) than that of CHP nanogels (1.2 h). The half-life enhancement of CHPOA–PEGSH was attributed to the presence of the crosslinker PEG chains, which prevent non-specific protein adsorption, and to the slow hydrolysis kinetics of the crosslinking esters in the biological milieu. The hybrid CHPOA–PEGSH nanogels are expected to be useful as injectable nanocarriers for drugs and proteins, in view of their low surface fouling and slow hydrolysis rate.

Figure optionsDownload as PowerPoint slideHighlights
► Nanogel-crosslinked nanoparticles were prepared by simple mixing of cholesterol-bearing pullulan (CHP) with acryloyl groups (CHPOA) and thiol-modified polyethylene glycol (PEGSH).
► The nanogels in the particles were released by hydrolysis of the crosslinker.
► Nanogel-crosslinked nanoparticles increased blood circulation time due to their structural stabilization.
► The nanoparticles with raspberry-like structure can be utilized as nanocarriers capable of controlled release of proteins.