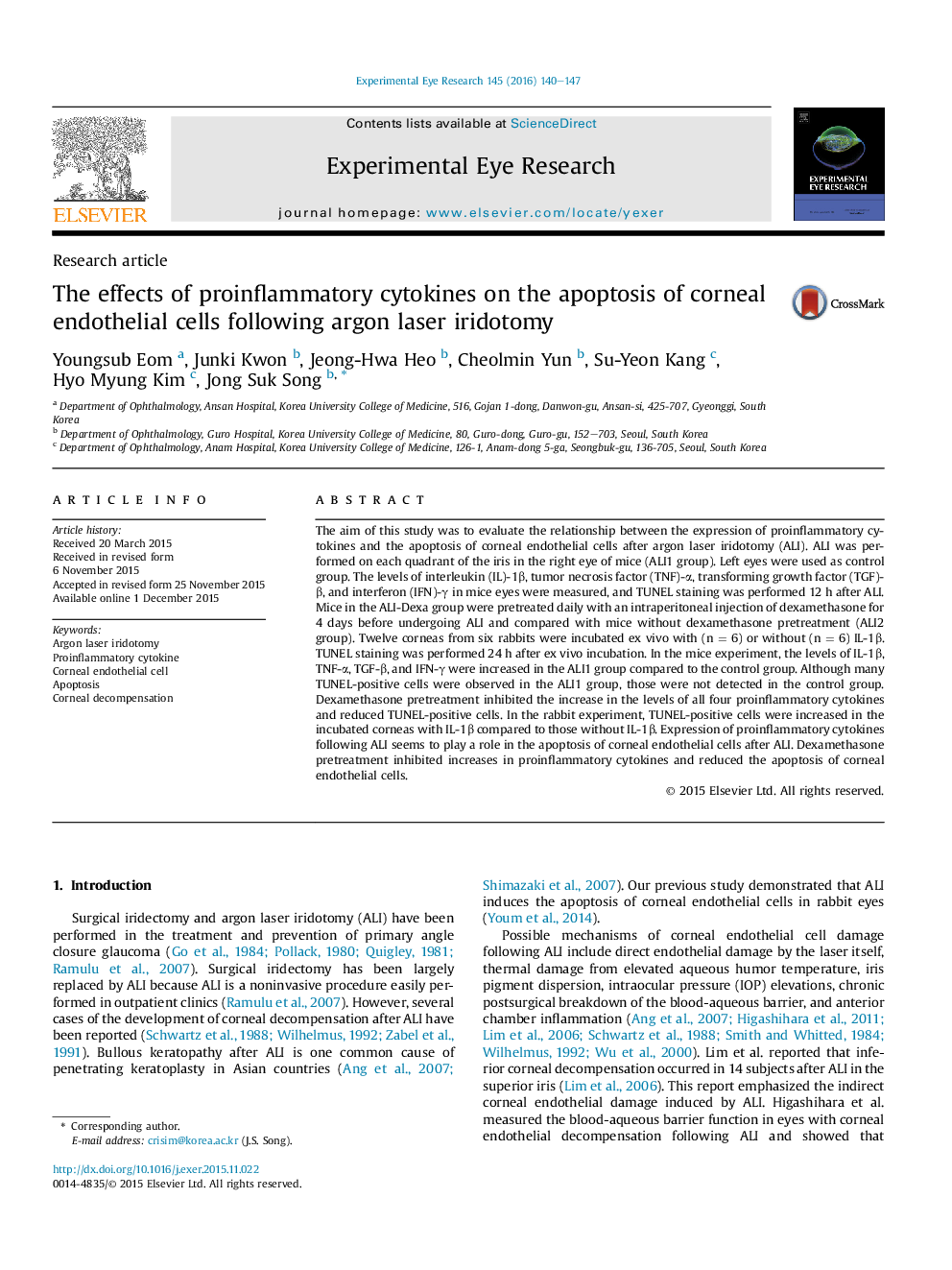 - ALI was performed on each quadrant of the iris in the eye of mice.
- Rabbit corneas were incubated exÂ vivo with or without IL-1Î².
- The levels of proinflammatory cytokines were increased in eyes of mice after ALI.
- TUNEL-positive cells were increased in the incubated corneas with IL-1Î².
- Proinflammatory cytokines appears to involve in the endothelial cell damage after ALI.

The aim of this study was to evaluate the relationship between the expression of proinflammatory cytokines and the apoptosis of corneal endothelial cells after argon laser iridotomy (ALI). ALI was performed on each quadrant of the iris in the right eye of mice (ALI1 group). Left eyes were used as control group. The levels of interleukin (IL)-1Î², tumor necrosis factor (TNF)-Î±, transforming growth factor (TGF)-Î², and interferon (IFN)-Î³ in mice eyes were measured, and TUNEL staining was performed 12Â h after ALI. Mice in the ALI-Dexa group were pretreated daily with an intraperitoneal injection of dexamethasone for 4 days before undergoing ALI and compared with mice without dexamethasone pretreatment (ALI2 group). Twelve corneas from six rabbits were incubated exÂ vivo with (nÂ =Â 6) or without (nÂ =Â 6) IL-1Î². TUNEL staining was performed 24Â h after exÂ vivo incubation. In the mice experiment, the levels of IL-1Î², TNF-Î±, TGF-Î², and IFN-Î³ were increased in the ALI1 group compared to the control group. Although many TUNEL-positive cells were observed in the ALI1 group, those were not detected in the control group. Dexamethasone pretreatment inhibited the increase in the levels of all four proinflammatory cytokines and reduced TUNEL-positive cells. In the rabbit experiment, TUNEL-positive cells were increased in the incubated corneas with IL-1Î² compared to those without IL-1Î². Expression of proinflammatory cytokines following ALI seems to play a role in the apoptosis of corneal endothelial cells after ALI. Dexamethasone pretreatment inhibited increases in proinflammatory cytokines and reduced the apoptosis of corneal endothelial cells.