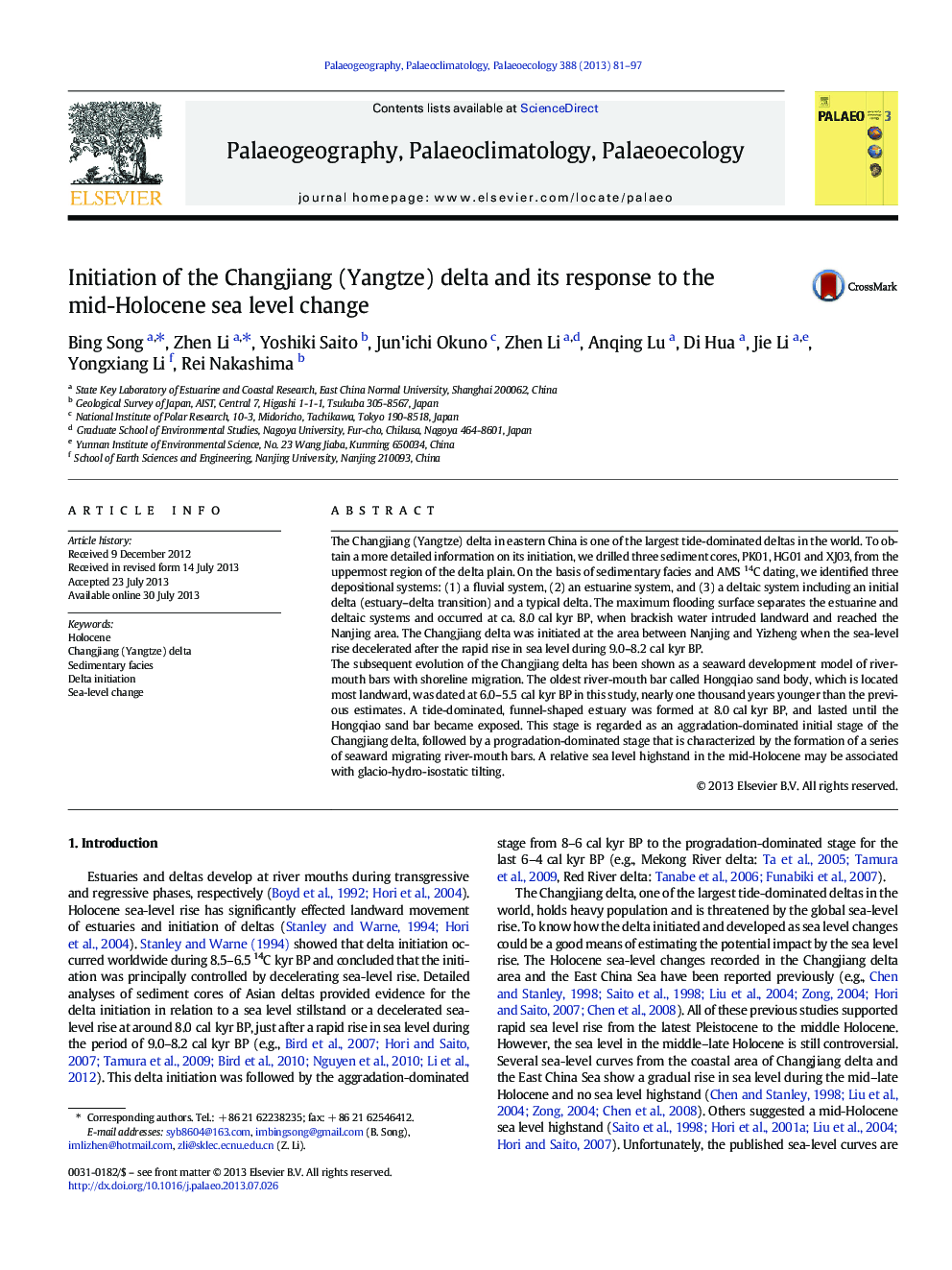 - The Changjiang delta in eastern China initiated at about 8.0Â calÂ kyr BP.
- The Hongqiao sand bar was dated ~Â 1000Â years younger than previous estimates.
- The delta initiation is linked to the decelerated rate of sea-level rise.
- A mid-Holocene high relative sea level was recognized from the upper region.
- The sea-level highstand might result from glacio-hydro-isostatic adjustment.

The Changjiang (Yangtze) delta in eastern China is one of the largest tide-dominated deltas in the world. To obtain a more detailed information on its initiation, we drilled three sediment cores, PK01, HG01 and XJ03, from the uppermost region of the delta plain. On the basis of sedimentary facies and AMS 14C dating, we identified three depositional systems: (1) a fluvial system, (2) an estuarine system, and (3) a deltaic system including an initial delta (estuary-delta transition) and a typical delta. The maximum flooding surface separates the estuarine and deltaic systems and occurred at ca. 8.0Â calÂ kyr BP, when brackish water intruded landward and reached the Nanjing area. The Changjiang delta was initiated at the area between Nanjing and Yizheng when the sea-level rise decelerated after the rapid rise in sea level during 9.0-8.2Â calÂ kyr BP.The subsequent evolution of the Changjiang delta has been shown as a seaward development model of river-mouth bars with shoreline migration. The oldest river-mouth bar called Hongqiao sand body, which is located most landward, was dated at 6.0-5.5Â calÂ kyr BP in this study, nearly one thousand years younger than the previous estimates. A tide-dominated, funnel-shaped estuary was formed at 8.0Â calÂ kyr BP, and lasted until the Hongqiao sand bar became exposed. This stage is regarded as an aggradation-dominated initial stage of the Changjiang delta, followed by a progradation-dominated stage that is characterized by the formation of a series of seaward migrating river-mouth bars. A relative sea level highstand in the mid-Holocene may be associated with glacio-hydro-isostatic tilting.