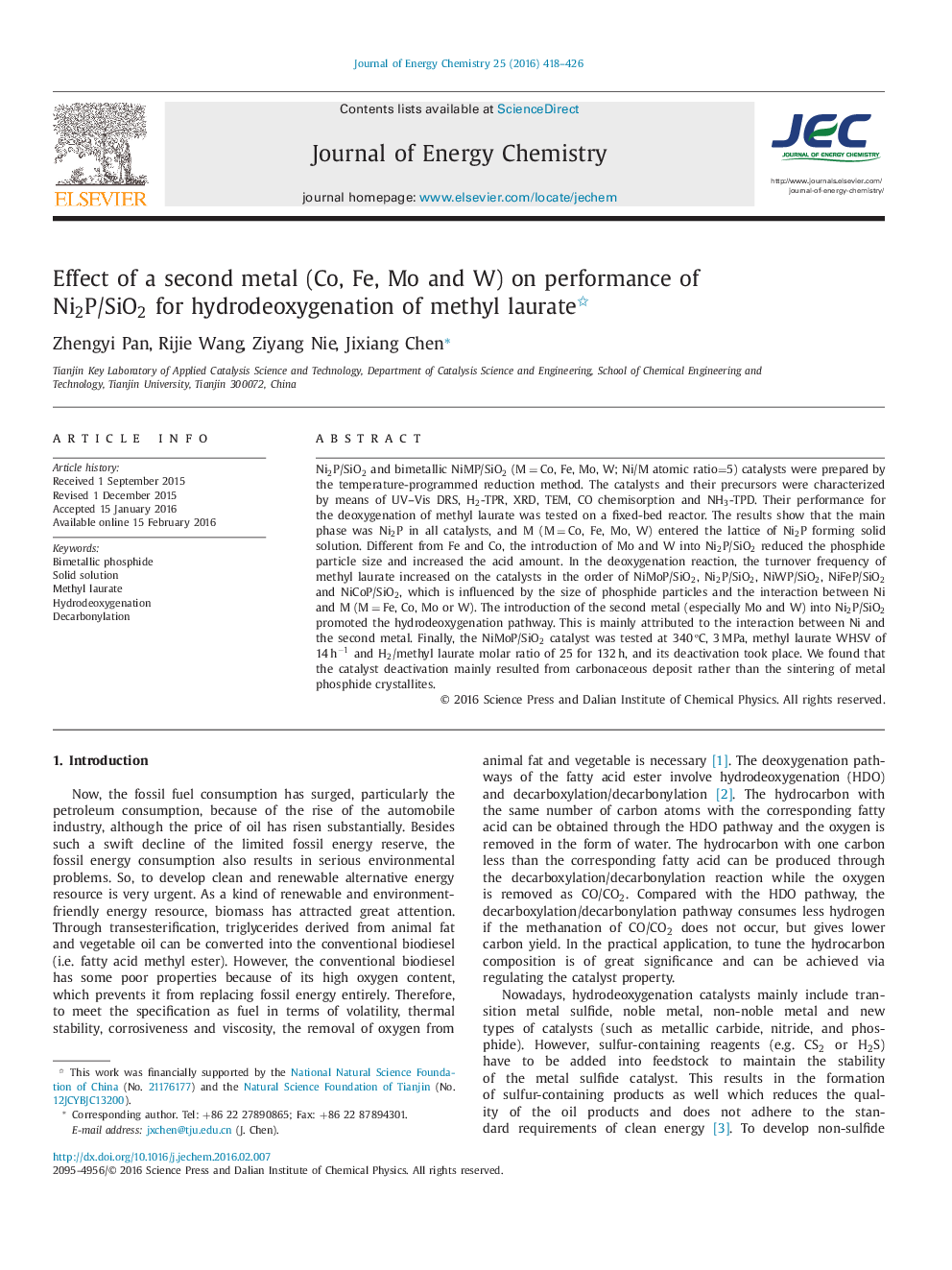 Ni2P/SiO2 and bimetallic NiMP/SiO2 (M = Co, Fe, Mo, W; Ni/M atomic ratio=5) catalysts were prepared by the temperature-programmed reduction method. The catalysts and their precursors were characterized by means of UV–Vis DRS, H2-TPR, XRD, TEM, CO chemisorption and NH3-TPD. Their performance for the deoxygenation of methyl laurate was tested on a fixed-bed reactor. The results show that the main phase was Ni2P in all catalysts, and M (M = Co, Fe, Mo, W) entered the lattice of Ni2P forming solid solution. Different from Fe and Co, the introduction of Mo and W into Ni2P/SiO2 reduced the phosphide particle size and increased the acid amount. In the deoxygenation reaction, the turnover frequency of methyl laurate increased on the catalysts in the order of NiMoP/SiO2, Ni2P/SiO2, NiWP/SiO2, NiFeP/SiO2 and NiCoP/SiO2, which is influenced by the size of phosphide particles and the interaction between Ni and M (M = Fe, Co, Mo or W). The introduction of the second metal (especially Mo and W) into Ni2P/SiO2 promoted the hydrodeoxygenation pathway. This is mainly attributed to the interaction between Ni and the second metal. Finally, the NiMoP/SiO2 catalyst was tested at 340 ºC, 3 MPa, methyl laurate WHSV of 14 h−1 and H2/methyl laurate molar ratio of 25 for 132 h, and its deactivation took place. We found that the catalyst deactivation mainly resulted from carbonaceous deposit rather than the sintering of metal phosphide crystallites.

The introduction of the second metal (especially Mo and W) into Ni2P/SiO2 promoted the hydrodeoxygenation pathway due to the geometrical and electronic interaction between Ni and M (M = Co, Fe, Mo, W).Figure optionsDownload as PowerPoint slide