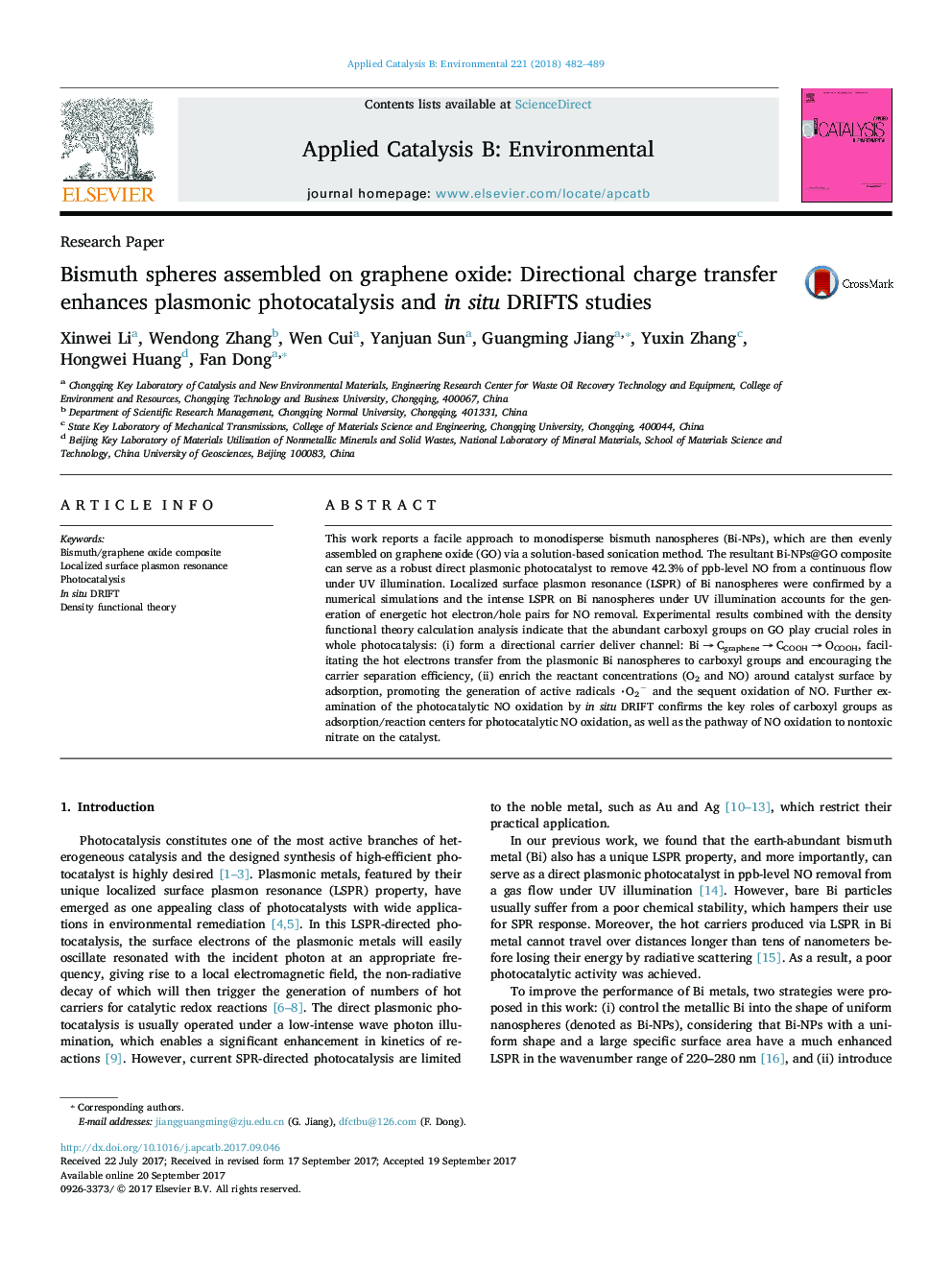 - Monodisperse bismuth nanospheres evenly assembled on graphene oxide are successfully fabricated.
- The as-prepared Bi-nanospheres@GO composite can serve as a robust direct plasmonic photocatalyst to remove ppb-level NO.
- GO advances the carrier separation efficiency by dragging photoexcited hot electrons from Bi nanospheres to carboxyl groups.
- Carboxyl groups in GO work as both adsorption and reaction centers in photocatalytic NO oxidation.
- The photocatalytic mechanism involved with NO removal was revealed by in situ DRIFTS investigation.

This work reports a facile approach to monodisperse bismuth nanospheres (Bi-NPs), which are then evenly assembled on graphene oxide (GO) via a solution-based sonication method. The resultant Bi-NPs@GO composite can serve as a robust direct plasmonic photocatalyst to remove 42.3% of ppb-level NO from a continuous flow under UV illumination. Localized surface plasmon resonance (LSPR) of Bi nanospheres were confirmed by a numerical simulations and the intense LSPR on Bi nanospheres under UV illumination accounts for the generation of energetic hot electron/hole pairs for NO removal. Experimental results combined with the density functional theory calculation analysis indicate that the abundant carboxyl groups on GO play crucial roles in whole photocatalysis: (i) form a directional carrier deliver channel: BiÂ âÂ CgrapheneÂ âÂ CCOOHÂ âÂ OCOOH, facilitating the hot electrons transfer from the plasmonic Bi nanospheres to carboxyl groups and encouraging the carrier separation efficiency, (ii) enrich the reactant concentrations (O2 and NO) around catalyst surface by adsorption, promoting the generation of active radicals O2â and the sequent oxidation of NO. Further examination of the photocatalytic NO oxidation by in situ DRIFT confirms the key roles of carboxyl groups as adsorption/reaction centers for photocatalytic NO oxidation, as well as the pathway of NO oxidation to nontoxic nitrate on the catalyst.

Energetic hot electrons produced via LSPR effect of Bi spheres could transfer to carboxyl groups where active radicals O2â are also accumulated. All the intermediates tend to be oxidized to either monodentate or bidentate nitrate by hot holes and O2â.152