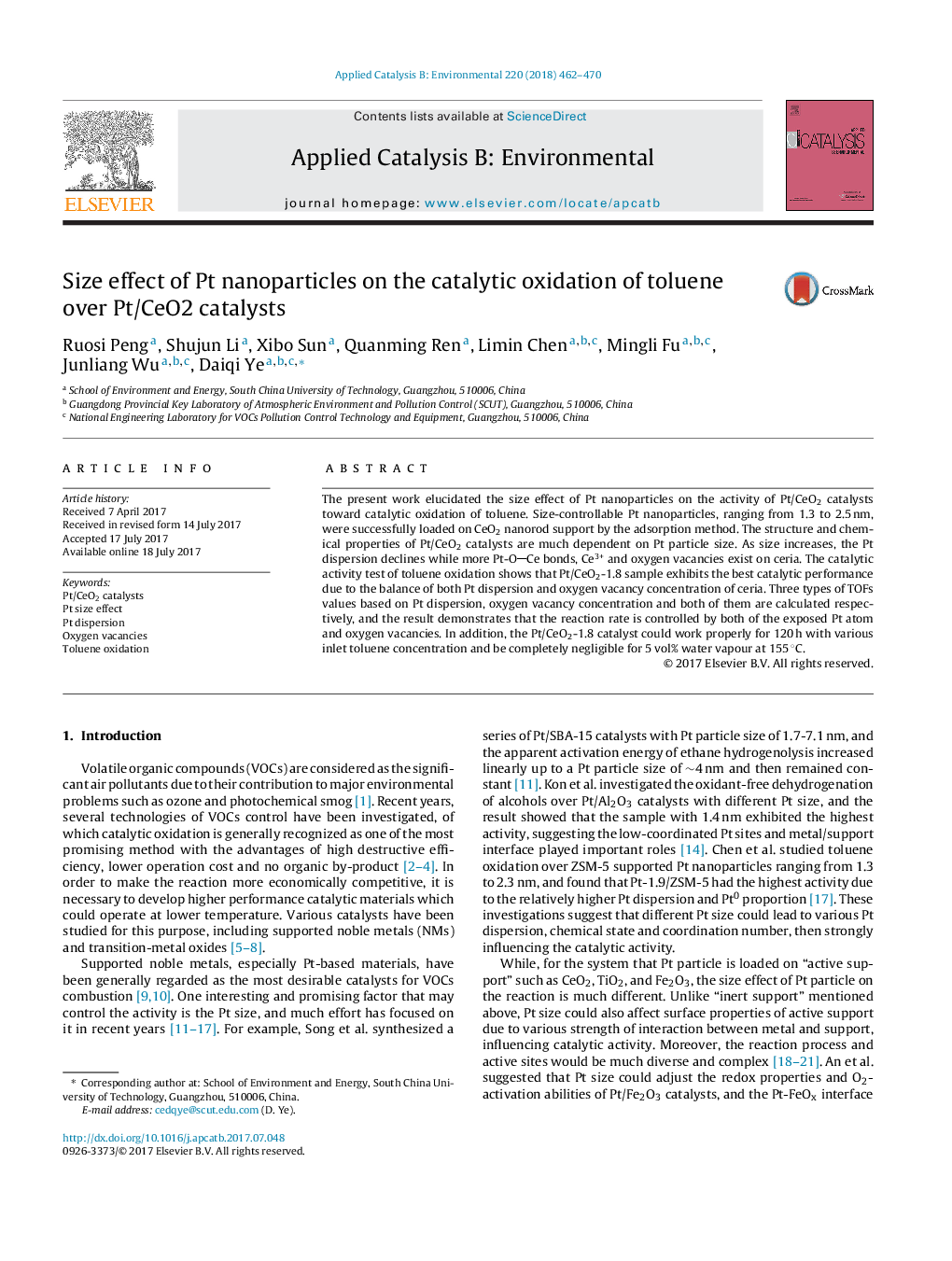 - A series of Pt particles with mean diameters from 1.3 to 2.5Â nm were synthesized.
- Pt/CeO2 exhibit a Pt-size-dependent catalytic activity toward toluene oxidation.
- As Pt size increases, Pt dispersion declines and oxygen vacancy concentration increases.
- Exposed Pt atom and oxygen vacancies on ceria are the active sites for the reaction.
- Pt/CeO2-1.8 is catalytically durable and negligible for 5 vol% water at 155Â Â°C.

The present work elucidated the size effect of Pt nanoparticles on the activity of Pt/CeO2 catalysts toward catalytic oxidation of toluene. Size-controllable Pt nanoparticles, ranging from 1.3 to 2.5Â nm, were successfully loaded on CeO2 nanorod support by the adsorption method. The structure and chemical properties of Pt/CeO2 catalysts are much dependent on Pt particle size. As size increases, the Pt dispersion declines while more Pt-OCe bonds, Ce3+ and oxygen vacancies exist on ceria. The catalytic activity test of toluene oxidation shows that Pt/CeO2-1.8 sample exhibits the best catalytic performance due to the balance of both Pt dispersion and oxygen vacancy concentration of ceria. Three types of TOFs values based on Pt dispersion, oxygen vacancy concentration and both of them are calculated respectively, and the result demonstrates that the reaction rate is controlled by both of the exposed Pt atom and oxygen vacancies. In addition, the Pt/CeO2-1.8 catalyst could work properly for 120Â h with various inlet toluene concentration and be completely negligible for 5 vol% water vapour at 155Â Â°C.

240The Pt/CeO2 catalyst with smaller Pt size exposes more Pt atom which could adsorb more toluene molecule and active it into dehydrogenated intermediates. However, the lower concentration of oxygen vacancy means a lower rate of oxygen cycle which could not supply enough active oxygen species to further oxide the intermediates into CO2 and H2O, resulting in a lower catalytic activity. For the Pt/CeO2 catalyst with bigger Pt size, though more active oxygen species exists on Pt-CeO2 interface, less dehydrogenated intermediates could be formation due to the limited exposed Pt atom. Hence the lower rate of toluene activation decreases the reaction rate. As a result, the Pt/CeO2-1.8 with the combined advantages of both high Pt dispersion and concentration of oxygen vacancy exhibits the best catalytic performance for toluene oxidation, and this is the Pt size effect on the catalytic oxidation of toluene over Pt/CeO2 catalysts.