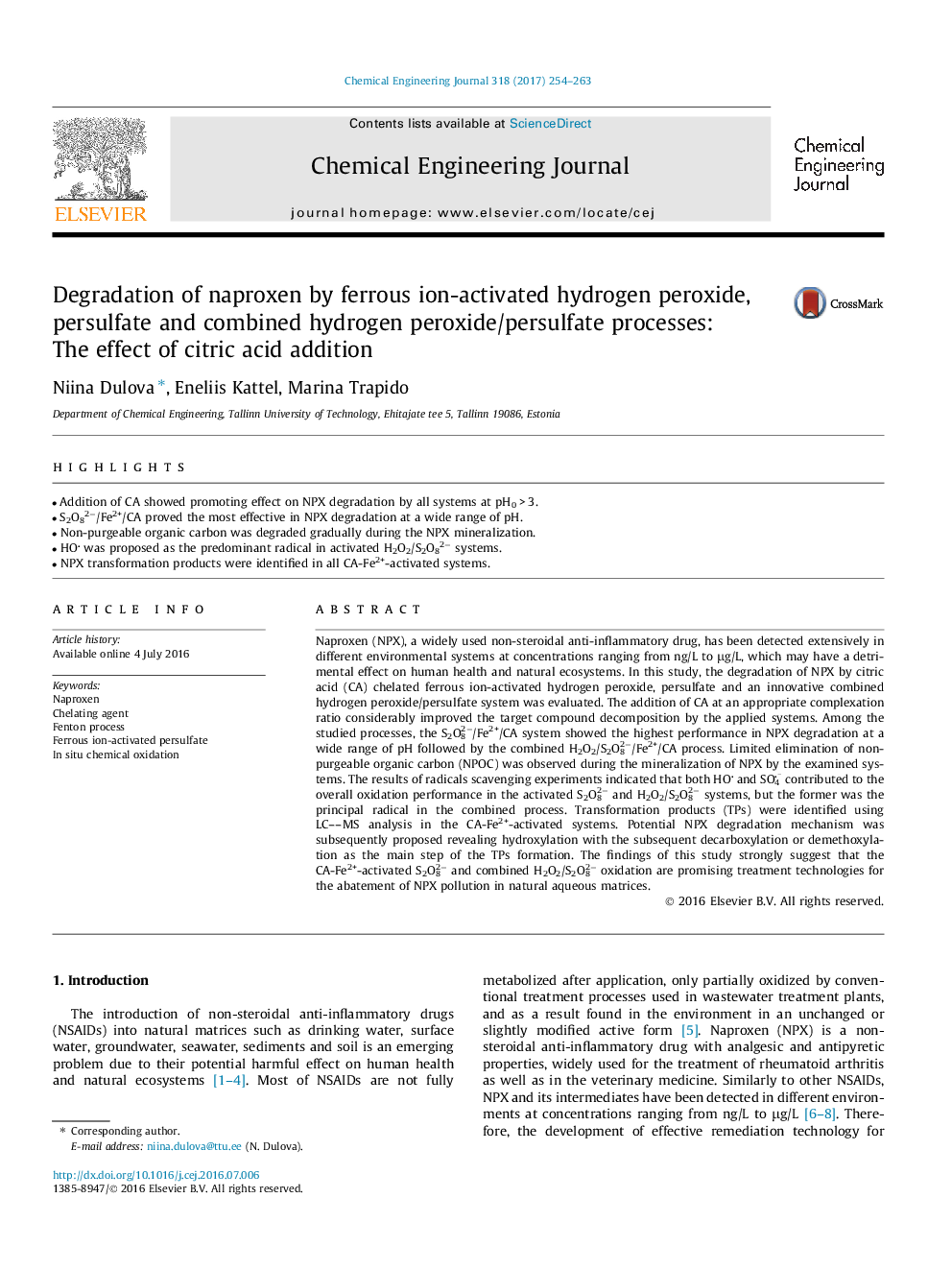 - Addition of CA showed promoting effect on NPX degradation by all systems at pH0Â >Â 3.
- S2O82â/Fe2+/CA proved the most effective in NPX degradation at a wide range of pH.
- Non-purgeable organic carbon was degraded gradually during the NPX mineralization.
- HO was proposed as the predominant radical in activated H2O2/S2O82â systems.
- NPX transformation products were identified in all CA-Fe2+-activated systems.

Naproxen (NPX), a widely used non-steroidal anti-inflammatory drug, has been detected extensively in different environmental systems at concentrations ranging from ng/L to Î¼g/L, which may have a detrimental effect on human health and natural ecosystems. In this study, the degradation of NPX by citric acid (CA) chelated ferrous ion-activated hydrogen peroxide, persulfate and an innovative combined hydrogen peroxide/persulfate system was evaluated. The addition of CA at an appropriate complexation ratio considerably improved the target compound decomposition by the applied systems. Among the studied processes, the S2O82â/Fe2+/CA system showed the highest performance in NPX degradation at a wide range of pH followed by the combined H2O2/S2O82â/Fe2+/CA process. Limited elimination of non-purgeable organic carbon (NPOC) was observed during the mineralization of NPX by the examined systems. The results of radicals scavenging experiments indicated that both HO and SO4â contributed to the overall oxidation performance in the activated S2O82â and H2O2/S2O82â systems, but the former was the principal radical in the combined process. Transformation products (TPs) were identified using LC--MS analysis in the CA-Fe2+-activated systems. Potential NPX degradation mechanism was subsequently proposed revealing hydroxylation with the subsequent decarboxylation or demethoxylation as the main step of the TPs formation. The findings of this study strongly suggest that the CA-Fe2+-activated S2O82â and combined H2O2/S2O82â oxidation are promising treatment technologies for the abatement of NPX pollution in natural aqueous matrices.