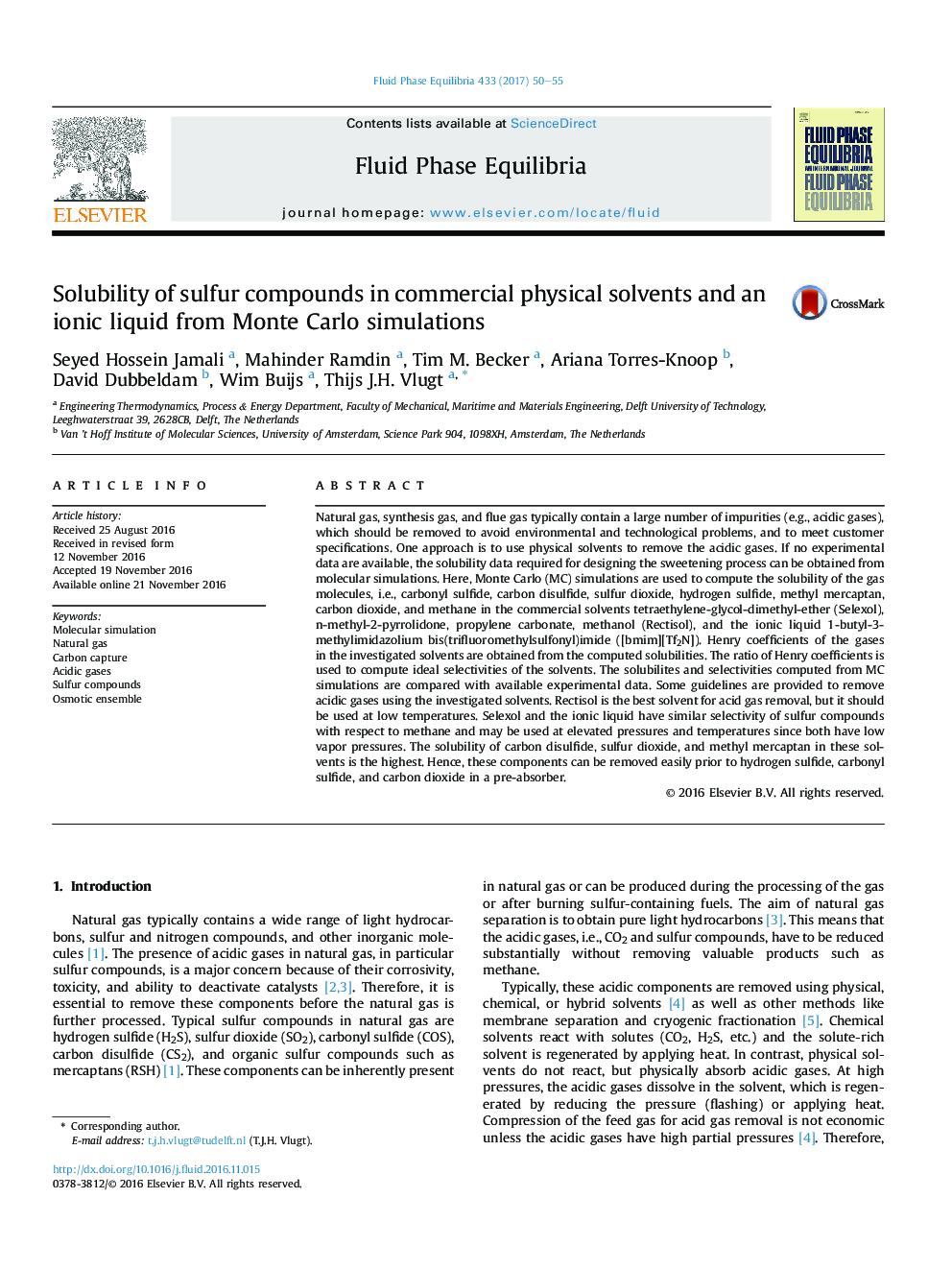 - Monte Carlo simulations to calculate the solubility of 5 sulfur compounds in four commercial solvents and one ionic liquid.
- Henry coefficients and ideal selectivities are calculated from the computed solubility data.
- A set of guidelines provided for separating sulfur compounds from natural gas or flue gas.
- MC simulations are a valuable tool to obtain phase equilibria of complex gas mixtures.

Natural gas, synthesis gas, and flue gas typically contain a large number of impurities (e.g., acidic gases), which should be removed to avoid environmental and technological problems, and to meet customer specifications. One approach is to use physical solvents to remove the acidic gases. If no experimental data are available, the solubility data required for designing the sweetening process can be obtained from molecular simulations. Here, Monte Carlo (MC) simulations are used to compute the solubility of the gas molecules, i.e., carbonyl sulfide, carbon disulfide, sulfur dioxide, hydrogen sulfide, methyl mercaptan, carbon dioxide, and methane in the commercial solvents tetraethylene-glycol-dimethyl-ether (Selexol), n-methyl-2-pyrrolidone, propylene carbonate, methanol (Rectisol), and the ionic liquid 1-butyl-3-methylimidazolium bis(trifluoromethylsulfonyl)imide ([bmim][Tf2N]). Henry coefficients of the gases in the investigated solvents are obtained from the computed solubilities. The ratio of Henry coefficients is used to compute ideal selectivities of the solvents. The solubilites and selectivities computed from MC simulations are compared with available experimental data. Some guidelines are provided to remove acidic gases using the investigated solvents. Rectisol is the best solvent for acid gas removal, but it should be used at low temperatures. Selexol and the ionic liquid have similar selectivity of sulfur compounds with respect to methane and may be used at elevated pressures and temperatures since both have low vapor pressures. The solubility of carbon disulfide, sulfur dioxide, and methyl mercaptan in these solvents is the highest. Hence, these components can be removed easily prior to hydrogen sulfide, carbonyl sulfide, and carbon dioxide in a pre-absorber.