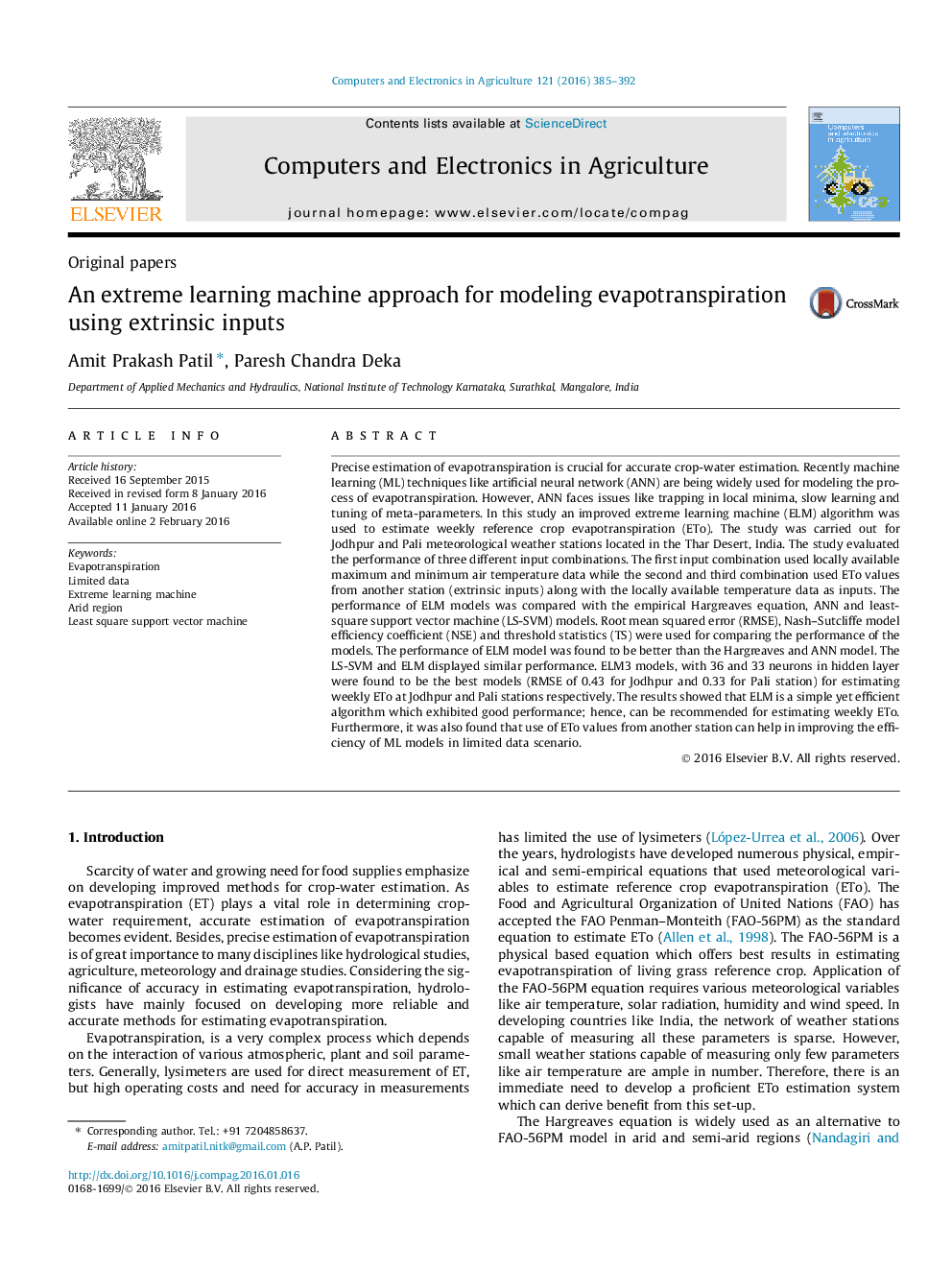 • ELM is used for modeling weekly ETo in arid regions of India.
• The performance of ELM is compared to Hargreaves, ANN and LS-SVM models.
• Effect of using ETo values from another station as inputs was tested.
• ELM performed better than the ANN and Hargreaves model.
• Use of extrinsic ETo values as input improved the performance of tested models.

Precise estimation of evapotranspiration is crucial for accurate crop-water estimation. Recently machine learning (ML) techniques like artificial neural network (ANN) are being widely used for modeling the process of evapotranspiration. However, ANN faces issues like trapping in local minima, slow learning and tuning of meta-parameters. In this study an improved extreme learning machine (ELM) algorithm was used to estimate weekly reference crop evapotranspiration (ETo). The study was carried out for Jodhpur and Pali meteorological weather stations located in the Thar Desert, India. The study evaluated the performance of three different input combinations. The first input combination used locally available maximum and minimum air temperature data while the second and third combination used ETo values from another station (extrinsic inputs) along with the locally available temperature data as inputs. The performance of ELM models was compared with the empirical Hargreaves equation, ANN and least-square support vector machine (LS-SVM) models. Root mean squared error (RMSE), Nash–Sutcliffe model efficiency coefficient (NSE) and threshold statistics (TS) were used for comparing the performance of the models. The performance of ELM model was found to be better than the Hargreaves and ANN model. The LS-SVM and ELM displayed similar performance. ELM3 models, with 36 and 33 neurons in hidden layer were found to be the best models (RMSE of 0.43 for Jodhpur and 0.33 for Pali station) for estimating weekly ETo at Jodhpur and Pali stations respectively. The results showed that ELM is a simple yet efficient algorithm which exhibited good performance; hence, can be recommended for estimating weekly ETo. Furthermore, it was also found that use of ETo values from another station can help in improving the efficiency of ML models in limited data scenario.