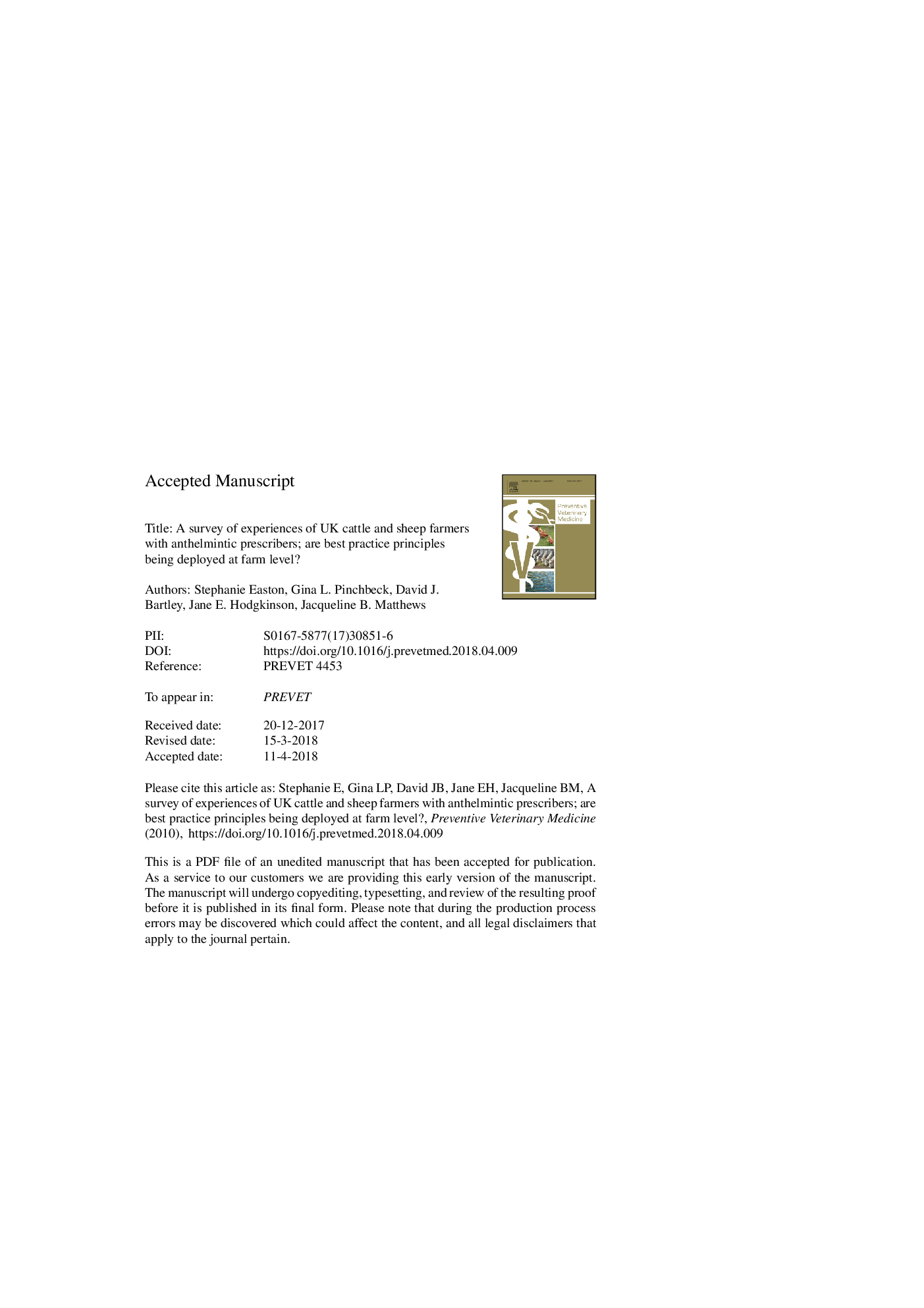 چکیده انگلیسی
Helminths are common pathogens of ruminants. These are controlled by anthelmintics; however, resistance is a major issue. More sustainable practices need to be deployed to protect anthelmintic efficacy. There is no published information on how farmer/prescriber interactions at anthelmintic purchase shape application of best practice on-farm. To determine experiences of UK ruminant farmers as they relate to anthelmintic purchasing/provision of best practice advice at the point-of-sale, an online survey was distributed. This explored farmer experiences in purchasing anthelmintics from the three UK animal medicines' prescribers (veterinarians, Suitably Qualified Persons [SQPs], veterinary pharmacists) and investigated farmer attitudes to anthelmintic use and resistance. First, farmers were grouped according to whom they purchased anthelmintics from, including those that purchased fromâ¯>â¯1 prescriber type. The results indicated there was no significant difference between the type of prescriber from whom farmers bought anthelmintics and route (face-to-face, telephone, online) through which they purchased them. Farmers who bought from veterinarians were more likely to view prescriber knowledge as more important. When asked who influenced purchase, there was a significant difference; farmers tended to be most influenced by the prescriber they purchased from. Those who bought from various types of prescriber were most influenced by veterinarians. Farmers who purchased from veterinarians were significantly more likely to state their seller discussed/recommended faecal egg count (FEC) testing and management strategies to reduce anthelmintic use than those who purchased from SQPs or fromâ¯>â¯1 prescribing channel. When grouped according to purchase route, farmers that bought through face-to-face interactions were significantly more likely to state they valued prescriber knowledge of parasites/anthelmintics than farmers that purchased via the telephone or internet. Farmers that purchased online were significantly less likely to consider prescriber advice. Analysis was then applied based on the type of livestock farmed. Generally, sheep farmers undertook FEC testing more than cattle farmers. Relatively few farmers stated they conducted anthelmintic sensitivity testing, with the majority of cattle farmers having not tested at all. This was despite a high level of concern for anthelmintic resistance in all types of farmers. 'Cattle only' farmers viewed convenience factors as more important than those that managed sheep or sheep/cattle. The results suggest that UK farmers that bought anthelmintics from veterinarians were more likely to be exposed to diagnostic-led control advice. Gaps in advice provision, particularly in relation to efficacy testing, were identified in all farmer groups.
ناشر
Database: Elsevier - ScienceDirect (ساینس دایرکت)
Journal: Preventive Veterinary Medicine - Volume 155, 1 July 2018, Pages 27-37
نویسندگان
Stephanie Easton, Gina L. Pinchbeck, David J. Bartley, Jane E. Hodgkinson, Jacqueline B. Matthews,
دانلود مقاله + سفارش ترجمه
دانلود مقاله ISI انگلیسی
رایگان برای ایرانیان
سفارش ترجمه تخصصی
با تضمین قیمت و کیفیت
منتشر شده در