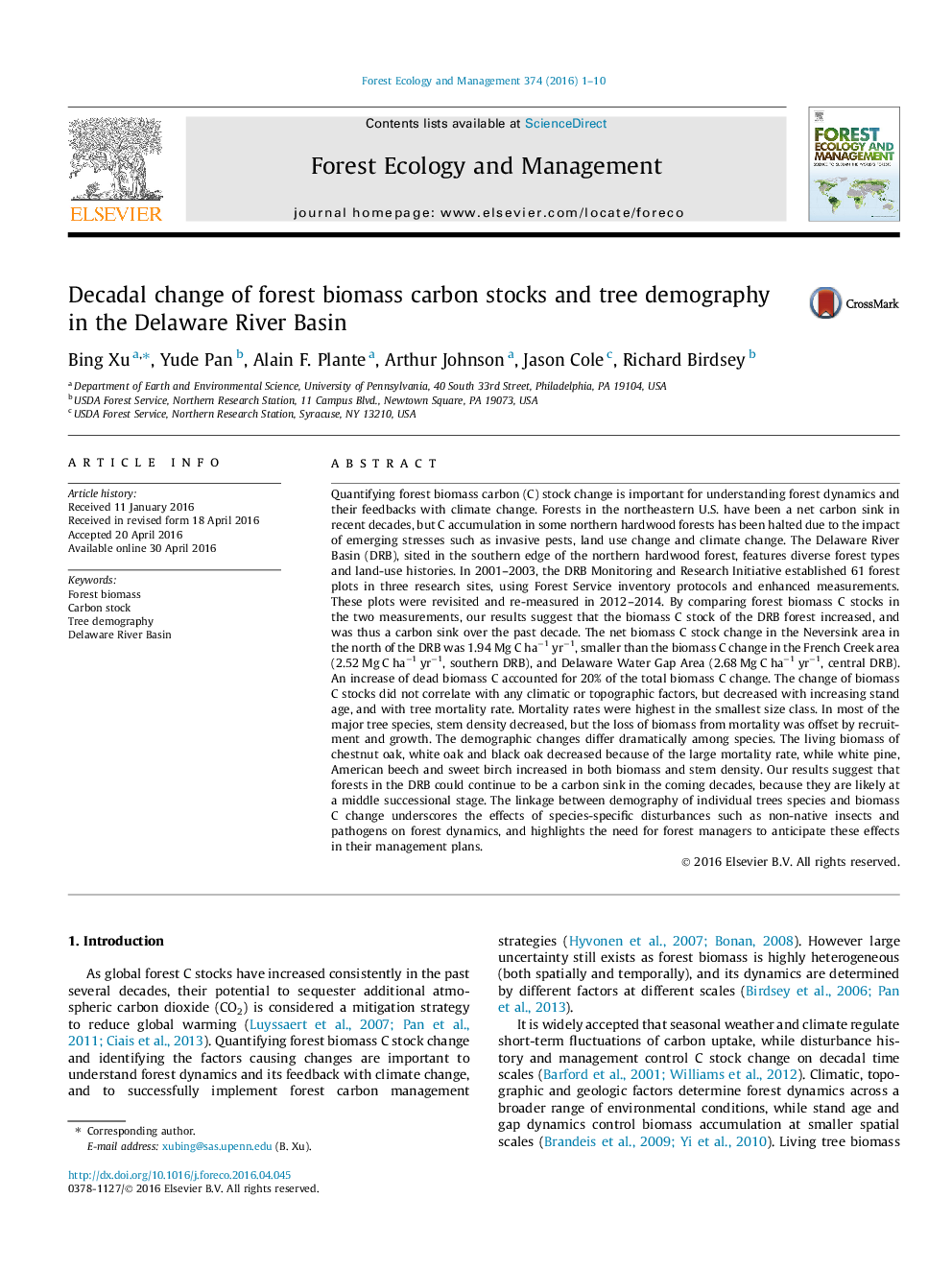 • Forest biomass in Delaware River Basin was a carbon sink over the past decade.
• Change of biomass C stocks did not correlate with climatic or topographic factors.
• Demographic changes in tree size and species were main drivers of biomass C change.

Quantifying forest biomass carbon (C) stock change is important for understanding forest dynamics and their feedbacks with climate change. Forests in the northeastern U.S. have been a net carbon sink in recent decades, but C accumulation in some northern hardwood forests has been halted due to the impact of emerging stresses such as invasive pests, land use change and climate change. The Delaware River Basin (DRB), sited in the southern edge of the northern hardwood forest, features diverse forest types and land-use histories. In 2001–2003, the DRB Monitoring and Research Initiative established 61 forest plots in three research sites, using Forest Service inventory protocols and enhanced measurements. These plots were revisited and re-measured in 2012–2014. By comparing forest biomass C stocks in the two measurements, our results suggest that the biomass C stock of the DRB forest increased, and was thus a carbon sink over the past decade. The net biomass C stock change in the Neversink area in the north of the DRB was 1.94 Mg C ha−1 yr−1, smaller than the biomass C change in the French Creek area (2.52 Mg C ha−1 yr−1, southern DRB), and Delaware Water Gap Area (2.68 Mg C ha−1 yr−1, central DRB). An increase of dead biomass C accounted for 20% of the total biomass C change. The change of biomass C stocks did not correlate with any climatic or topographic factors, but decreased with increasing stand age, and with tree mortality rate. Mortality rates were highest in the smallest size class. In most of the major tree species, stem density decreased, but the loss of biomass from mortality was offset by recruitment and growth. The demographic changes differ dramatically among species. The living biomass of chestnut oak, white oak and black oak decreased because of the large mortality rate, while white pine, American beech and sweet birch increased in both biomass and stem density. Our results suggest that forests in the DRB could continue to be a carbon sink in the coming decades, because they are likely at a middle successional stage. The linkage between demography of individual trees species and biomass C change underscores the effects of species-specific disturbances such as non-native insects and pathogens on forest dynamics, and highlights the need for forest managers to anticipate these effects in their management plans.