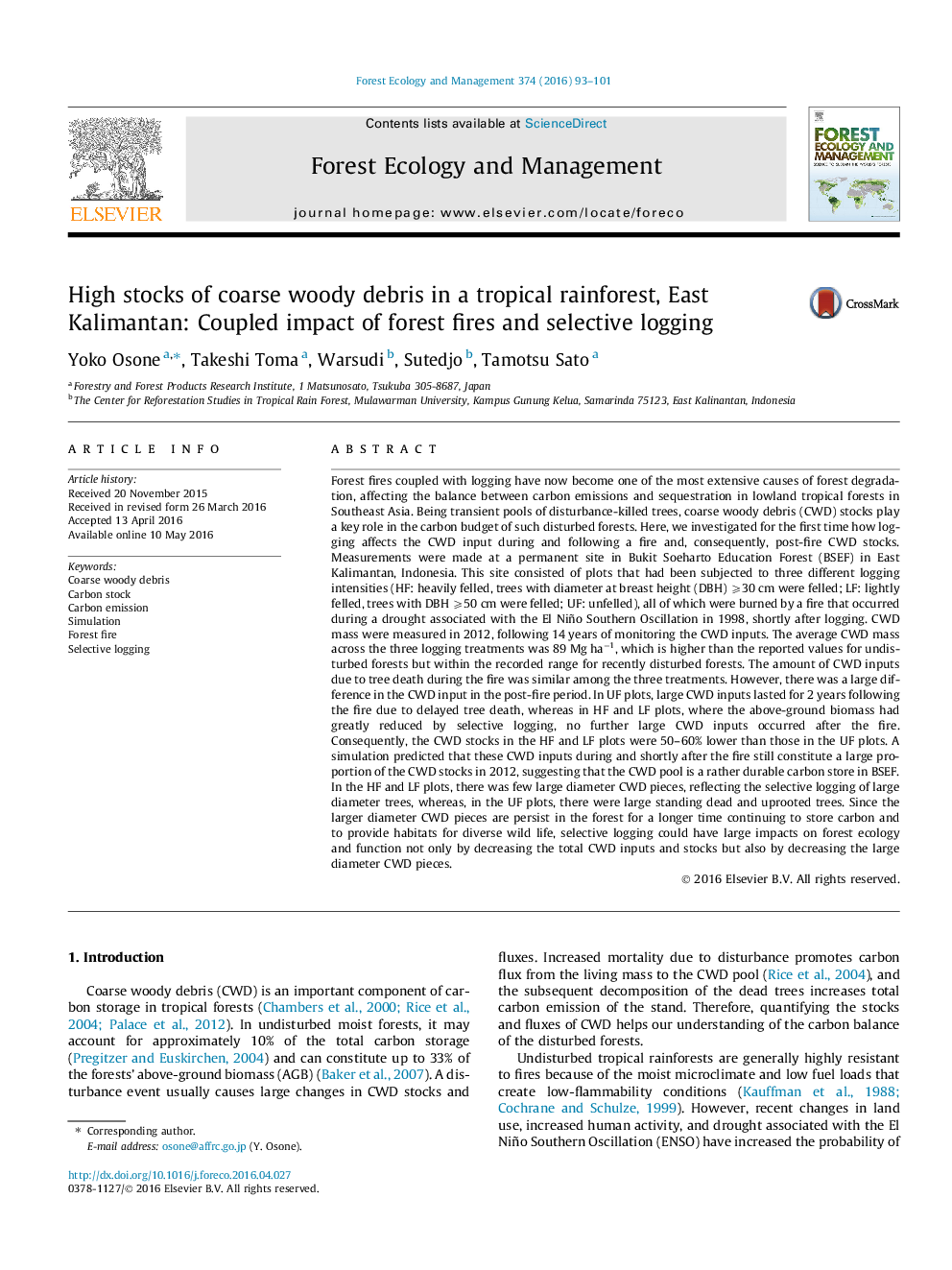 Forest fires coupled with logging have now become one of the most extensive causes of forest degradation, affecting the balance between carbon emissions and sequestration in lowland tropical forests in Southeast Asia. Being transient pools of disturbance-killed trees, coarse woody debris (CWD) stocks play a key role in the carbon budget of such disturbed forests. Here, we investigated for the first time how logging affects the CWD input during and following a fire and, consequently, post-fire CWD stocks. Measurements were made at a permanent site in Bukit Soeharto Education Forest (BSEF) in East Kalimantan, Indonesia. This site consisted of plots that had been subjected to three different logging intensities (HF: heavily felled, trees with diameter at breast height (DBH) ⩾30 cm were felled; LF: lightly felled, trees with DBH ⩾50 cm were felled; UF: unfelled), all of which were burned by a fire that occurred during a drought associated with the El Niño Southern Oscillation in 1998, shortly after logging. CWD mass were measured in 2012, following 14 years of monitoring the CWD inputs. The average CWD mass across the three logging treatments was 89 Mg ha−1, which is higher than the reported values for undisturbed forests but within the recorded range for recently disturbed forests. The amount of CWD inputs due to tree death during the fire was similar among the three treatments. However, there was a large difference in the CWD input in the post-fire period. In UF plots, large CWD inputs lasted for 2 years following the fire due to delayed tree death, whereas in HF and LF plots, where the above-ground biomass had greatly reduced by selective logging, no further large CWD inputs occurred after the fire. Consequently, the CWD stocks in the HF and LF plots were 50–60% lower than those in the UF plots. A simulation predicted that these CWD inputs during and shortly after the fire still constitute a large proportion of the CWD stocks in 2012, suggesting that the CWD pool is a rather durable carbon store in BSEF. In the HF and LF plots, there was few large diameter CWD pieces, reflecting the selective logging of large diameter trees, whereas, in the UF plots, there were large standing dead and uprooted trees. Since the larger diameter CWD pieces are persist in the forest for a longer time continuing to store carbon and to provide habitats for diverse wild life, selective logging could have large impacts on forest ecology and function not only by decreasing the total CWD inputs and stocks but also by decreasing the large diameter CWD pieces.