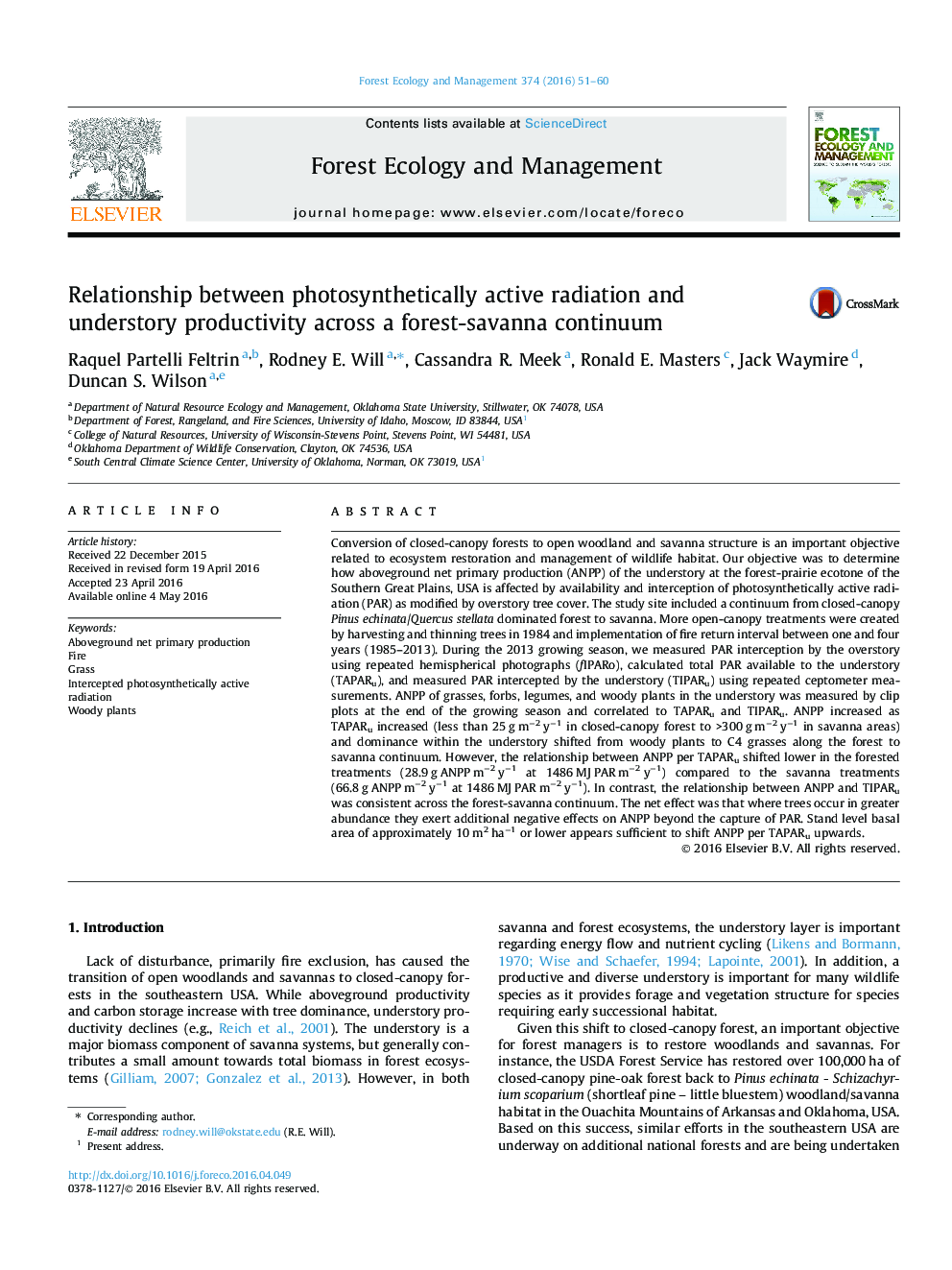 Conversion of closed-canopy forests to open woodland and savanna structure is an important objective related to ecosystem restoration and management of wildlife habitat. Our objective was to determine how aboveground net primary production (ANPP) of the understory at the forest-prairie ecotone of the Southern Great Plains, USA is affected by availability and interception of photosynthetically active radiation (PAR) as modified by overstory tree cover. The study site included a continuum from closed-canopy Pinus echinata/Quercus stellata dominated forest to savanna. More open-canopy treatments were created by harvesting and thinning trees in 1984 and implementation of fire return interval between one and four years (1985–2013). During the 2013 growing season, we measured PAR interception by the overstory using repeated hemispherical photographs (fIPARo), calculated total PAR available to the understory (TAPARu), and measured PAR intercepted by the understory (TIPARu) using repeated ceptometer measurements. ANPP of grasses, forbs, legumes, and woody plants in the understory was measured by clip plots at the end of the growing season and correlated to TAPARu and TIPARu. ANPP increased as TAPARu increased (less than 25 g m−2 y−1 in closed-canopy forest to >300 g m−2 y−1 in savanna areas) and dominance within the understory shifted from woody plants to C4 grasses along the forest to savanna continuum. However, the relationship between ANPP per TAPARu shifted lower in the forested treatments (28.9 g ANPP m−2 y−1 at 1486 MJ PAR m−2 y−1) compared to the savanna treatments (66.8 g ANPP m−2 y−1 at 1486 MJ PAR m−2 y−1). In contrast, the relationship between ANPP and TIPARu was consistent across the forest-savanna continuum. The net effect was that where trees occur in greater abundance they exert additional negative effects on ANPP beyond the capture of PAR. Stand level basal area of approximately 10 m2 ha−1 or lower appears sufficient to shift ANPP per TAPARu upwards.