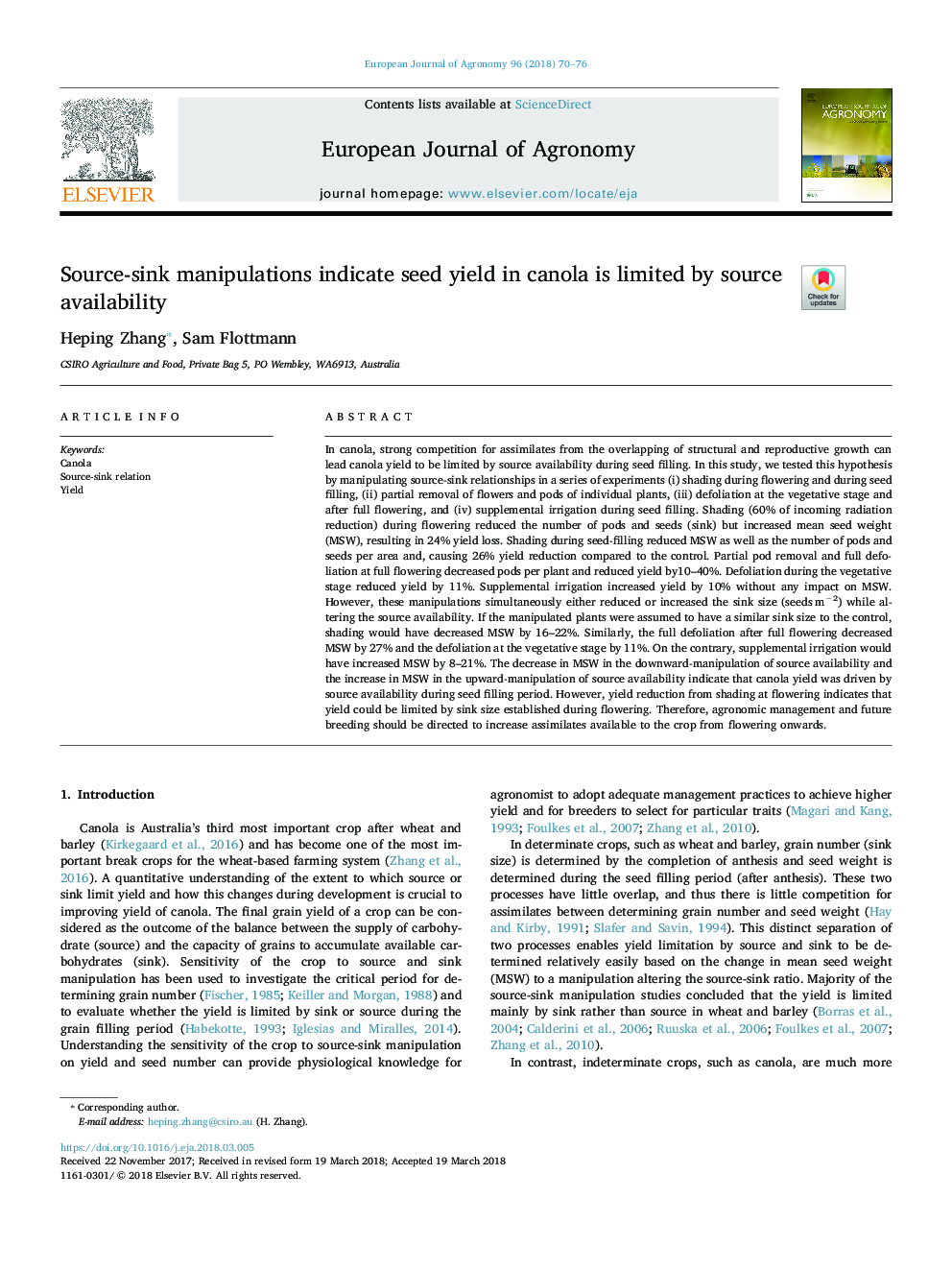 چکیده انگلیسی
In canola, strong competition for assimilates from the overlapping of structural and reproductive growth can lead canola yield to be limited by source availability during seed filling. In this study, we tested this hypothesis by manipulating source-sink relationships in a series of experiments (i) shading during flowering and during seed filling, (ii) partial removal of flowers and pods of individual plants, (iii) defoliation at the vegetative stage and after full flowering, and (iv) supplemental irrigation during seed filling. Shading (60% of incoming radiation reduction) during flowering reduced the number of pods and seeds (sink) but increased mean seed weight (MSW), resulting in 24% yield loss. Shading during seed-filling reduced MSW as well as the number of pods and seeds per area and, causing 26% yield reduction compared to the control. Partial pod removal and full defoliation at full flowering decreased pods per plant and reduced yield by10-40%. Defoliation during the vegetative stage reduced yield by 11%. Supplemental irrigation increased yield by 10% without any impact on MSW. However, these manipulations simultaneously either reduced or increased the sink size (seedsâmâ2) while altering the source availability. If the manipulated plants were assumed to have a similar sink size to the control, shading would have decreased MSW by 16-22%. Similarly, the full defoliation after full flowering decreased MSW by 27% and the defoliation at the vegetative stage by 11%. On the contrary, supplemental irrigation would have increased MSW by 8-21%. The decrease in MSW in the downward-manipulation of source availability and the increase in MSW in the upward-manipulation of source availability indicate that canola yield was driven by source availability during seed filling period. However, yield reduction from shading at flowering indicates that yield could be limited by sink size established during flowering. Therefore, agronomic management and future breeding should be directed to increase assimilates available to the crop from flowering onwards.
ناشر
Database: Elsevier - ScienceDirect (ساینس دایرکت)
Journal: European Journal of Agronomy - Volume 96, May 2018, Pages 70-76
نویسندگان
Heping Zhang, Sam Flottmann,
دانلود مقاله + سفارش ترجمه
دانلود مقاله ISI انگلیسی
رایگان برای ایرانیان
سفارش ترجمه تخصصی
با تضمین قیمت و کیفیت
منتشر شده در