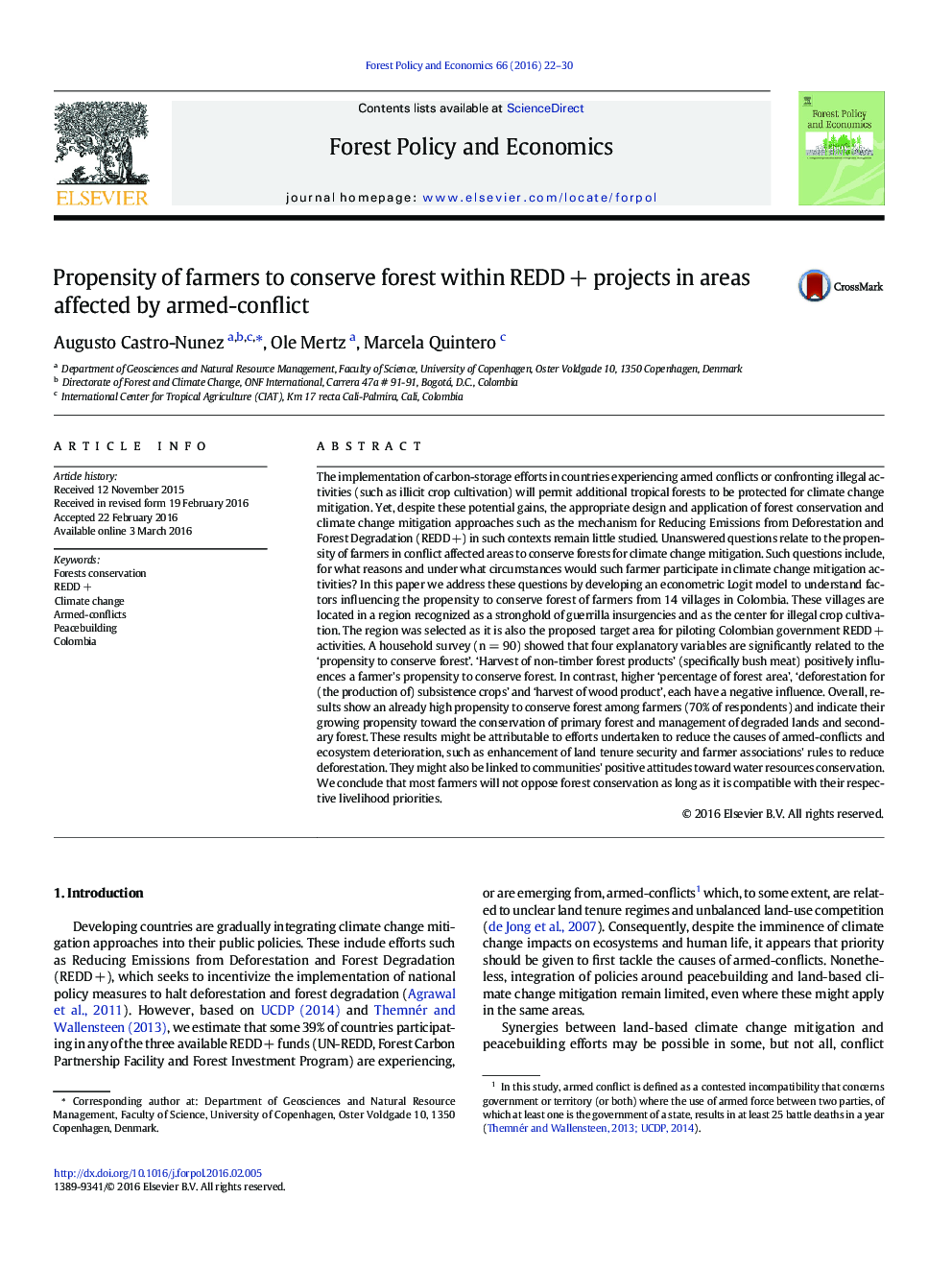 • We developed a model for assessing farmers' propensity to conserve forest (FPCF).
• Conservation propensity seems to be influenced by previous peacebuilding efforts.
• The use of NTFPs is positively associated with high FPCF.
• Non-carbon benefits seem more important than financial benefits in FPCF.
• Conservation of water resources is an important reason for conserving forest.

The implementation of carbon-storage efforts in countries experiencing armed conflicts or confronting illegal activities (such as illicit crop cultivation) will permit additional tropical forests to be protected for climate change mitigation. Yet, despite these potential gains, the appropriate design and application of forest conservation and climate change mitigation approaches such as the mechanism for Reducing Emissions from Deforestation and Forest Degradation (REDD +) in such contexts remain little studied. Unanswered questions relate to the propensity of farmers in conflict affected areas to conserve forests for climate change mitigation. Such questions include, for what reasons and under what circumstances would such farmer participate in climate change mitigation activities? In this paper we address these questions by developing an econometric Logit model to understand factors influencing the propensity to conserve forest of farmers from 14 villages in Colombia. These villages are located in a region recognized as a stronghold of guerrilla insurgencies and as the center for illegal crop cultivation. The region was selected as it is also the proposed target area for piloting Colombian government REDD + activities. A household survey (n = 90) showed that four explanatory variables are significantly related to the ‘propensity to conserve forest’. ‘Harvest of non-timber forest products’ (specifically bush meat) positively influences a farmer's propensity to conserve forest. In contrast, higher ‘percentage of forest area’, ‘deforestation for (the production of) subsistence crops’ and ‘harvest of wood product’, each have a negative influence. Overall, results show an already high propensity to conserve forest among farmers (70% of respondents) and indicate their growing propensity toward the conservation of primary forest and management of degraded lands and secondary forest. These results might be attributable to efforts undertaken to reduce the causes of armed-conflicts and ecosystem deterioration, such as enhancement of land tenure security and farmer associations' rules to reduce deforestation. They might also be linked to communities' positive attitudes toward water resources conservation. We conclude that most farmers will not oppose forest conservation as long as it is compatible with their respective livelihood priorities.