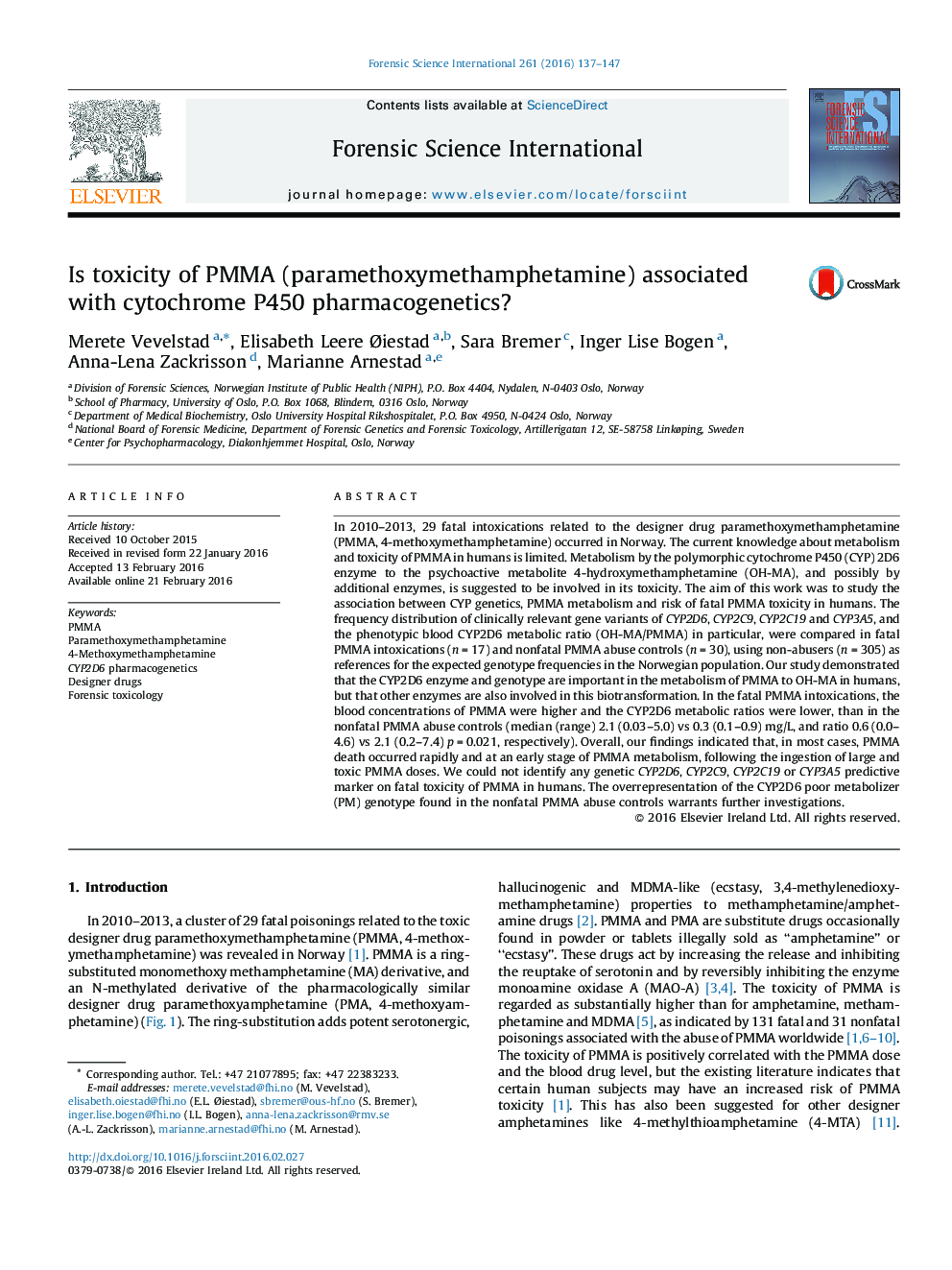 • 29 fatal intoxications in Norway attributed to paramethoxymethamphetamine (PMMA).
• CYP2D6 genotype important in metabolism of PMMA to OH-MA in humans.
• Other enzymes than CYP2D6 also involved in this biotransformation.
• No CYP2D6, CYP2C9, CYP2C19 or CYP3A5 predictive markers of fatal toxicity of PMMA.
• In most fatalities PMMA death occurred rapidly after large intake(s).

In 2010–2013, 29 fatal intoxications related to the designer drug paramethoxymethamphetamine (PMMA, 4-methoxymethamphetamine) occurred in Norway. The current knowledge about metabolism and toxicity of PMMA in humans is limited. Metabolism by the polymorphic cytochrome P450 (CYP) 2D6 enzyme to the psychoactive metabolite 4-hydroxymethamphetamine (OH-MA), and possibly by additional enzymes, is suggested to be involved in its toxicity. The aim of this work was to study the association between CYP genetics, PMMA metabolism and risk of fatal PMMA toxicity in humans. The frequency distribution of clinically relevant gene variants of CYP2D6, CYP2C9, CYP2C19 and CYP3A5, and the phenotypic blood CYP2D6 metabolic ratio (OH-MA/PMMA) in particular, were compared in fatal PMMA intoxications (n = 17) and nonfatal PMMA abuse controls (n = 30), using non-abusers (n = 305) as references for the expected genotype frequencies in the Norwegian population. Our study demonstrated that the CYP2D6 enzyme and genotype are important in the metabolism of PMMA to OH-MA in humans, but that other enzymes are also involved in this biotransformation. In the fatal PMMA intoxications, the blood concentrations of PMMA were higher and the CYP2D6 metabolic ratios were lower, than in the nonfatal PMMA abuse controls (median (range) 2.1 (0.03–5.0) vs 0.3 (0.1–0.9) mg/L, and ratio 0.6 (0.0–4.6) vs 2.1 (0.2–7.4) p = 0.021, respectively). Overall, our findings indicated that, in most cases, PMMA death occurred rapidly and at an early stage of PMMA metabolism, following the ingestion of large and toxic PMMA doses. We could not identify any genetic CYP2D6, CYP2C9, CYP2C19 or CYP3A5 predictive marker on fatal toxicity of PMMA in humans. The overrepresentation of the CYP2D6 poor metabolizer (PM) genotype found in the nonfatal PMMA abuse controls warrants further investigations.