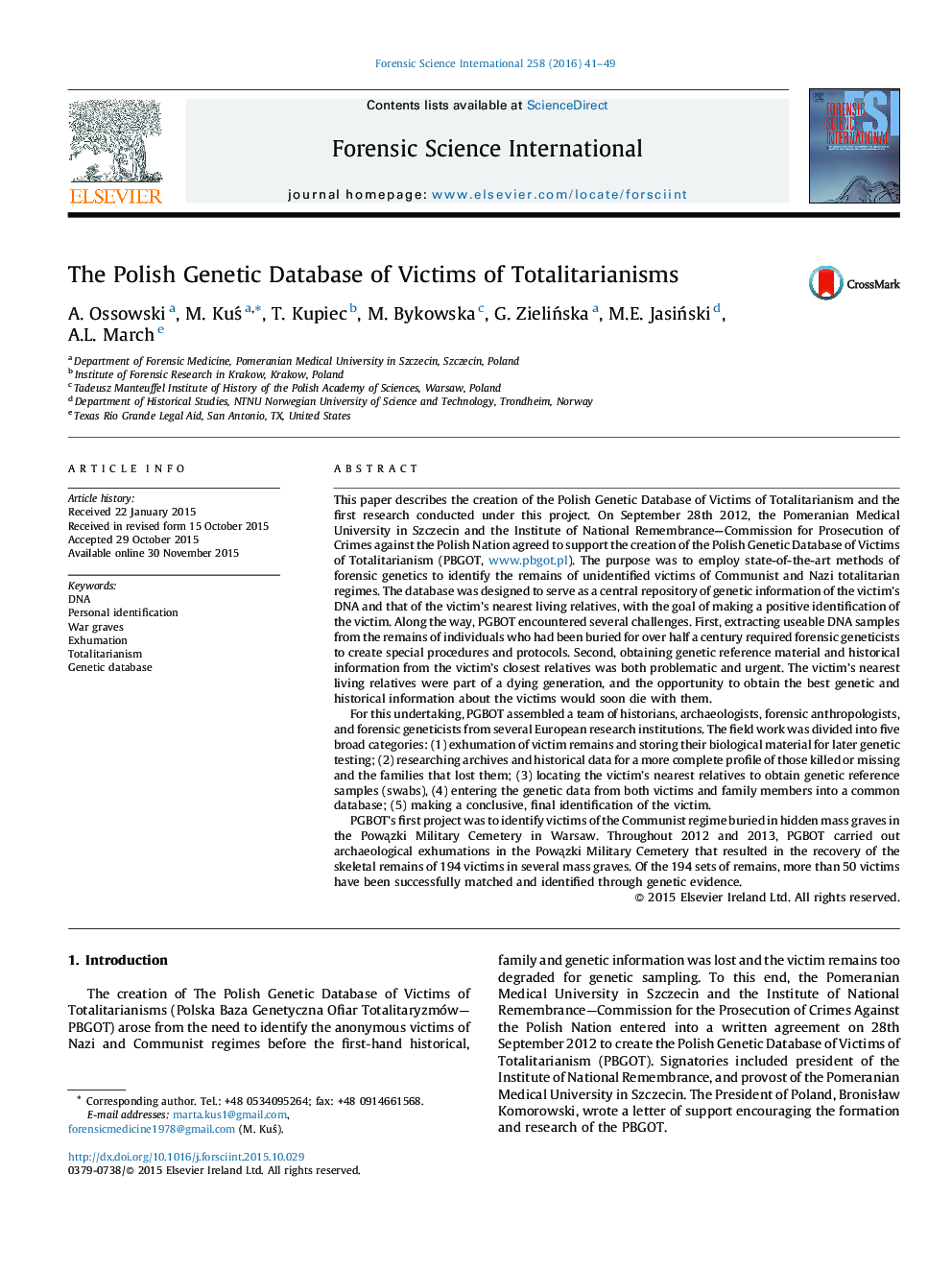 • Project concerning identification of victims of totalitarian regimes in Poland.
• Process done according the DVI standards.
• So far, more than 50 remains identified due to the project with the use of genetic methods.

This paper describes the creation of the Polish Genetic Database of Victims of Totalitarianism and the first research conducted under this project. On September 28th 2012, the Pomeranian Medical University in Szczecin and the Institute of National Remembrance—Commission for Prosecution of Crimes against the Polish Nation agreed to support the creation of the Polish Genetic Database of Victims of Totalitarianism (PBGOT, www.pbgot.pl). The purpose was to employ state-of-the-art methods of forensic genetics to identify the remains of unidentified victims of Communist and Nazi totalitarian regimes. The database was designed to serve as a central repository of genetic information of the victim's DNA and that of the victim's nearest living relatives, with the goal of making a positive identification of the victim. Along the way, PGBOT encountered several challenges. First, extracting useable DNA samples from the remains of individuals who had been buried for over half a century required forensic geneticists to create special procedures and protocols. Second, obtaining genetic reference material and historical information from the victim's closest relatives was both problematic and urgent. The victim's nearest living relatives were part of a dying generation, and the opportunity to obtain the best genetic and historical information about the victims would soon die with them.For this undertaking, PGBOT assembled a team of historians, archaeologists, forensic anthropologists, and forensic geneticists from several European research institutions. The field work was divided into five broad categories: (1) exhumation of victim remains and storing their biological material for later genetic testing; (2) researching archives and historical data for a more complete profile of those killed or missing and the families that lost them; (3) locating the victim's nearest relatives to obtain genetic reference samples (swabs), (4) entering the genetic data from both victims and family members into a common database; (5) making a conclusive, final identification of the victim.PGBOT's first project was to identify victims of the Communist regime buried in hidden mass graves in the Powązki Military Cemetery in Warsaw. Throughout 2012 and 2013, PGBOT carried out archaeological exhumations in the Powązki Military Cemetery that resulted in the recovery of the skeletal remains of 194 victims in several mass graves. Of the 194 sets of remains, more than 50 victims have been successfully matched and identified through genetic evidence.