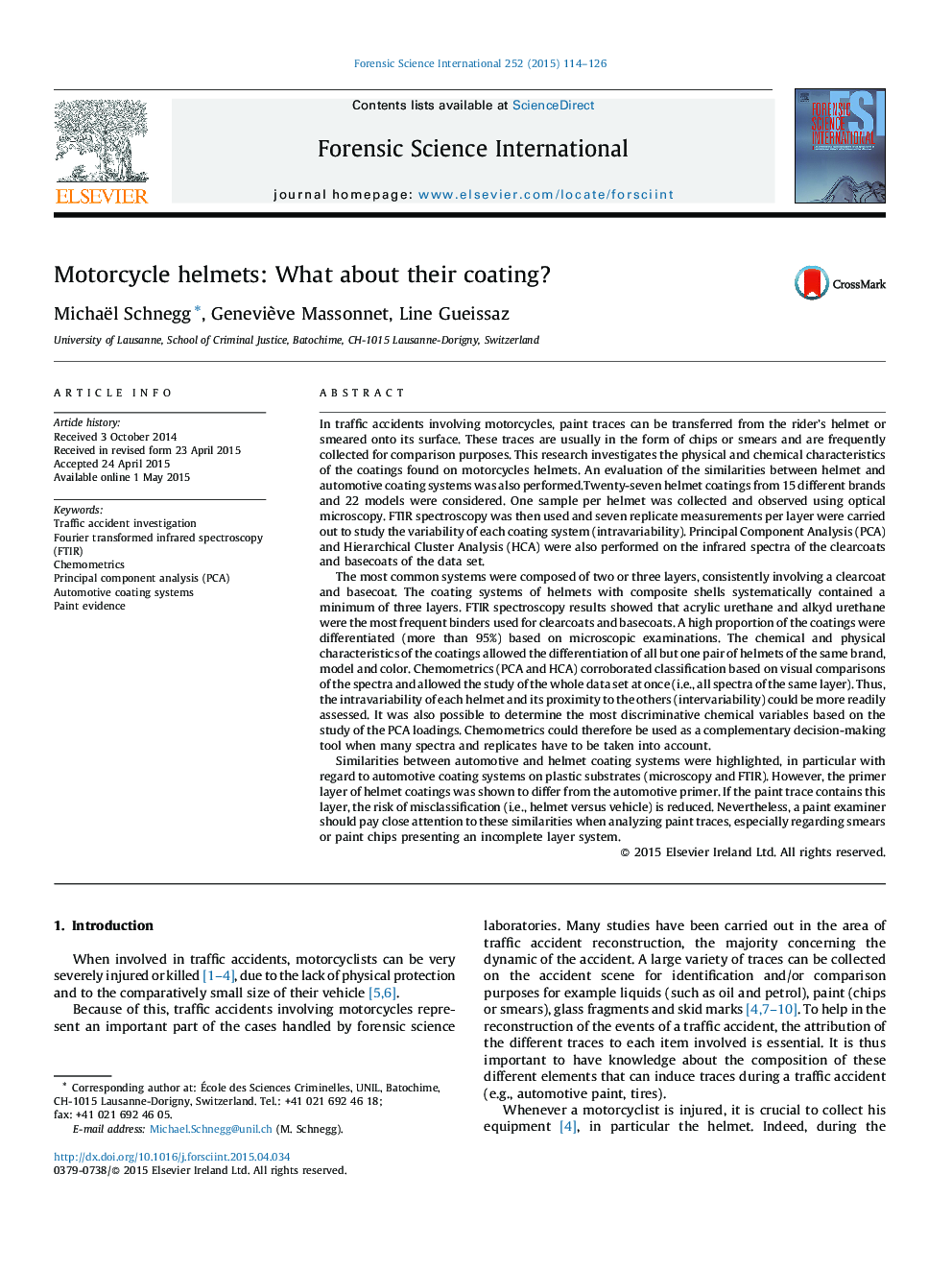 • 27 helmet coatings from 15 brands and 22 models were examined (microscopy and FTIR).
• Coatings were mostly composed of 2 or 3 layers, involving a clearcoat and basecoat.
• All but one pair of helmets (same brand, model and color) were differentiated.
• Chemometrics could be used as a complementary decision-making tool.
• Similarities between automotive and helmet coating systems were highlighted.

In traffic accidents involving motorcycles, paint traces can be transferred from the rider's helmet or smeared onto its surface. These traces are usually in the form of chips or smears and are frequently collected for comparison purposes. This research investigates the physical and chemical characteristics of the coatings found on motorcycles helmets. An evaluation of the similarities between helmet and automotive coating systems was also performed.Twenty-seven helmet coatings from 15 different brands and 22 models were considered. One sample per helmet was collected and observed using optical microscopy. FTIR spectroscopy was then used and seven replicate measurements per layer were carried out to study the variability of each coating system (intravariability). Principal Component Analysis (PCA) and Hierarchical Cluster Analysis (HCA) were also performed on the infrared spectra of the clearcoats and basecoats of the data set.The most common systems were composed of two or three layers, consistently involving a clearcoat and basecoat. The coating systems of helmets with composite shells systematically contained a minimum of three layers. FTIR spectroscopy results showed that acrylic urethane and alkyd urethane were the most frequent binders used for clearcoats and basecoats. A high proportion of the coatings were differentiated (more than 95%) based on microscopic examinations. The chemical and physical characteristics of the coatings allowed the differentiation of all but one pair of helmets of the same brand, model and color. Chemometrics (PCA and HCA) corroborated classification based on visual comparisons of the spectra and allowed the study of the whole data set at once (i.e., all spectra of the same layer). Thus, the intravariability of each helmet and its proximity to the others (intervariability) could be more readily assessed. It was also possible to determine the most discriminative chemical variables based on the study of the PCA loadings. Chemometrics could therefore be used as a complementary decision-making tool when many spectra and replicates have to be taken into account.Similarities between automotive and helmet coating systems were highlighted, in particular with regard to automotive coating systems on plastic substrates (microscopy and FTIR). However, the primer layer of helmet coatings was shown to differ from the automotive primer. If the paint trace contains this layer, the risk of misclassification (i.e., helmet versus vehicle) is reduced. Nevertheless, a paint examiner should pay close attention to these similarities when analyzing paint traces, especially regarding smears or paint chips presenting an incomplete layer system.