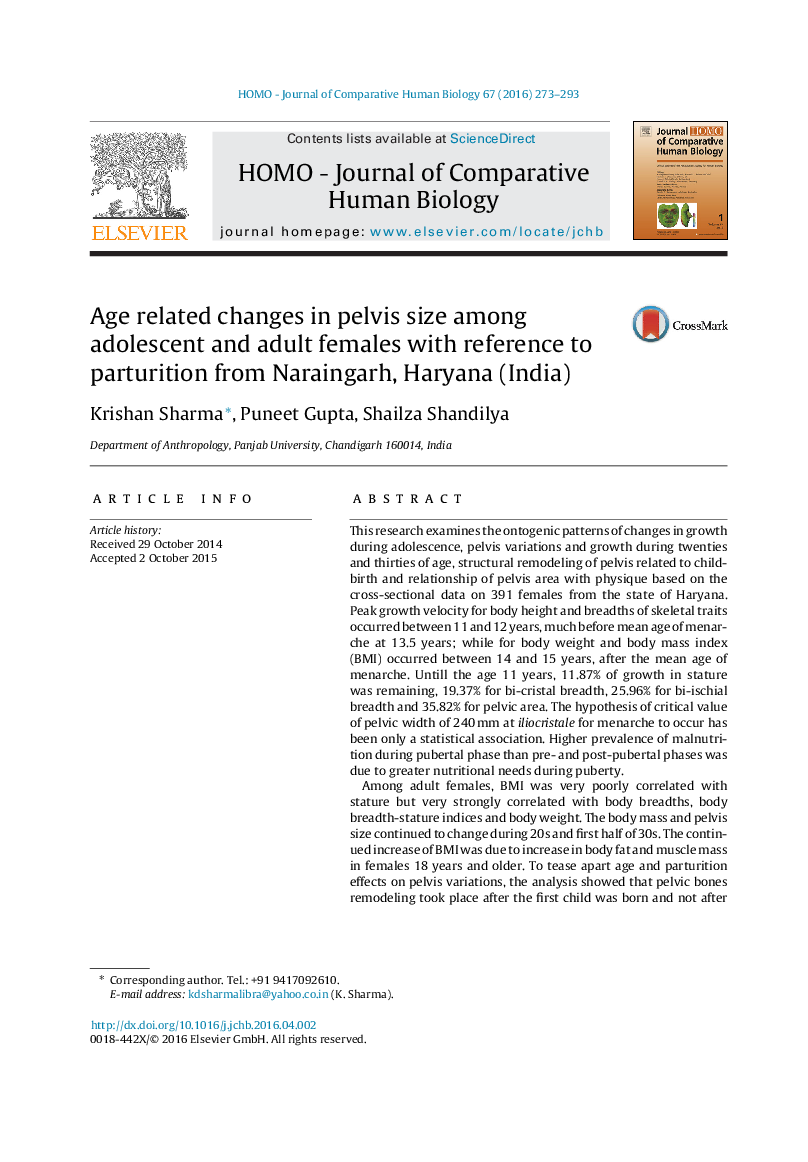 This research examines the ontogenic patterns of changes in growth during adolescence, pelvis variations and growth during twenties and thirties of age, structural remodeling of pelvis related to childbirth and relationship of pelvis area with physique based on the cross-sectional data on 391 females from the state of Haryana. Peak growth velocity for body height and breadths of skeletal traits occurred between 11 and 12 years, much before mean age of menarche at 13.5 years; while for body weight and body mass index (BMI) occurred between 14 and 15 years, after the mean age of menarche. Untill the age 11 years, 11.87% of growth in stature was remaining, 19.37% for bi-cristal breadth, 25.96% for bi-ischial breadth and 35.82% for pelvic area. The hypothesis of critical value of pelvic width of 240 mm at iliocristale for menarche to occur has been only a statistical association. Higher prevalence of malnutrition during pubertal phase than pre- and post-pubertal phases was due to greater nutritional needs during puberty.Among adult females, BMI was very poorly correlated with stature but very strongly correlated with body breadths, body breadth-stature indices and body weight. The body mass and pelvis size continued to change during 20s and first half of 30s. The continued increase of BMI was due to increase in body fat and muscle mass in females 18 years and older. To tease apart age and parturition effects on pelvis variations, the analysis showed that pelvic bones remodeling took place after the first child was born and not after the subsequent births, and it was a sign of childbirth phenotypic plasticity rather than age. Pelvis area was strongly associated with stature, BMI and age. Mean pelvic area of tall females was greater than those of medium and short stature. Females with broad shoulders had significantly greater mean pelvis area than those with narrow shoulders and medium shoulders. Females having thin/lean physique had the smallest mean pelvis area compared to those having medium and obese types of physiques. The stepwise multiple regression analysis revealed that BMI was the major determinant factor (multiple r = 0.37) of pelvis area; addition of stature component increased the value of multiple r to 0.50, while addition of age marginally increased multiple r to 0.53.