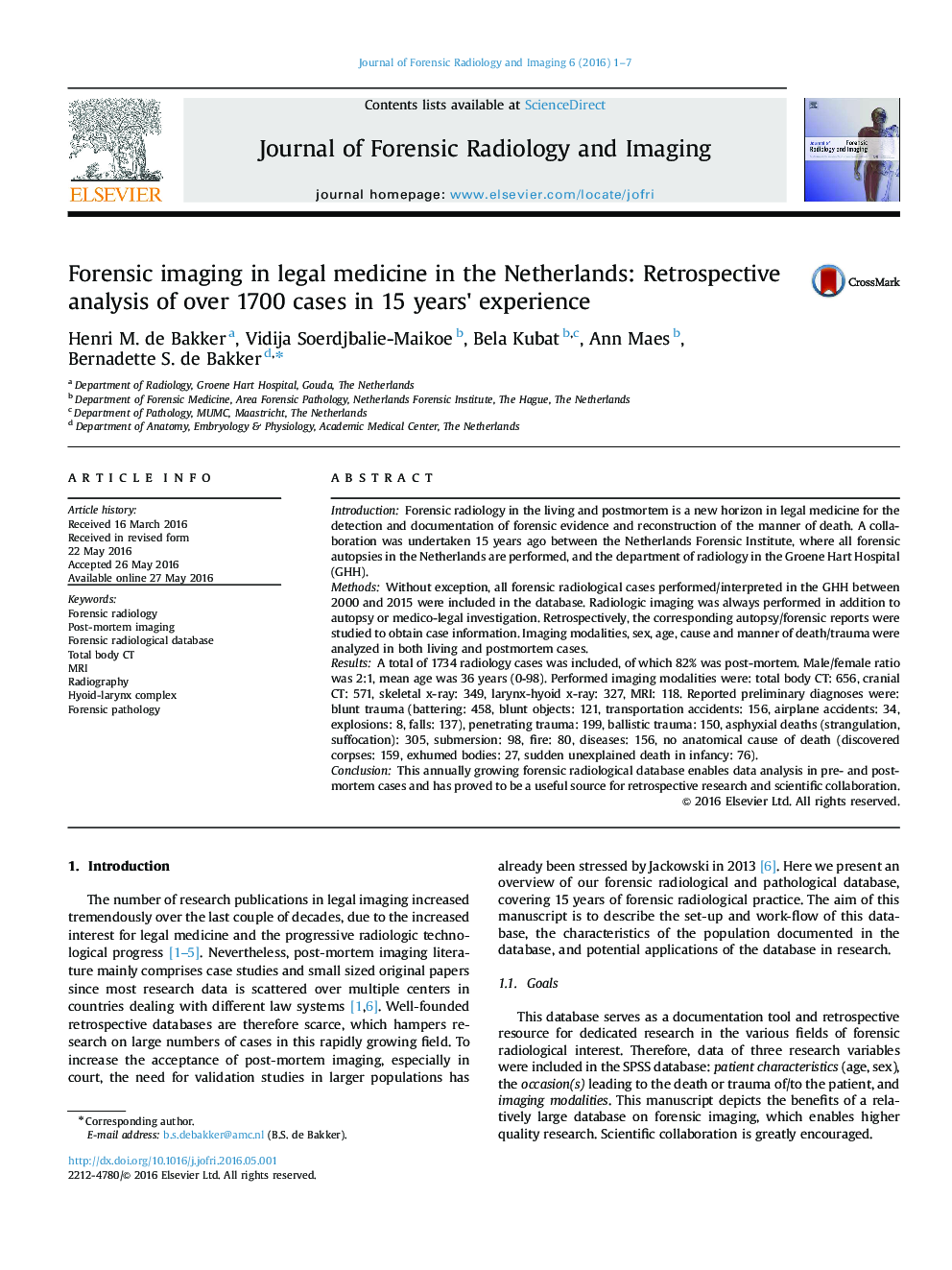 • The paper depicts the benefits of a forensic imaging database that enables higher quality research.
• This forensic radiological database is the largest and longest-established in the Netherlands.
• It enables analysis in pre- and post-mortem cases and proved to be useful in retrospective research.
• It can serve as a template for colleagues who seek to set up a service in forensic imaging.
• Scientific collaboration is greatly encouraged.

IntroductionForensic radiology in the living and postmortem is a new horizon in legal medicine for the detection and documentation of forensic evidence and reconstruction of the manner of death. A collaboration was undertaken 15 years ago between the Netherlands Forensic Institute, where all forensic autopsies in the Netherlands are performed, and the department of radiology in the Groene Hart Hospital (GHH).MethodsWithout exception, all forensic radiological cases performed/interpreted in the GHH between 2000 and 2015 were included in the database. Radiologic imaging was always performed in addition to autopsy or medico-legal investigation. Retrospectively, the corresponding autopsy/forensic reports were studied to obtain case information. Imaging modalities, sex, age, cause and manner of death/trauma were analyzed in both living and postmortem cases.ResultsA total of 1734 radiology cases was included, of which 82% was post-mortem. Male/female ratio was 2:1, mean age was 36 years (0‐98). Performed imaging modalities were: total body CT: 656, cranial CT: 571, skeletal x-ray: 349, larynx-hyoid x-ray: 327, MRI: 118. Reported preliminary diagnoses were: blunt trauma (battering: 458, blunt objects: 121, transportation accidents: 156, airplane accidents: 34, explosions: 8, falls: 137), penetrating trauma: 199, ballistic trauma: 150, asphyxial deaths (strangulation, suffocation): 305, submersion: 98, fire: 80, diseases: 156, no anatomical cause of death (discovered corpses: 159, exhumed bodies: 27, sudden unexplained death in infancy: 76).ConclusionThis annually growing forensic radiological database enables data analysis in pre- and post-mortem cases and has proved to be a useful source for retrospective research and scientific collaboration.