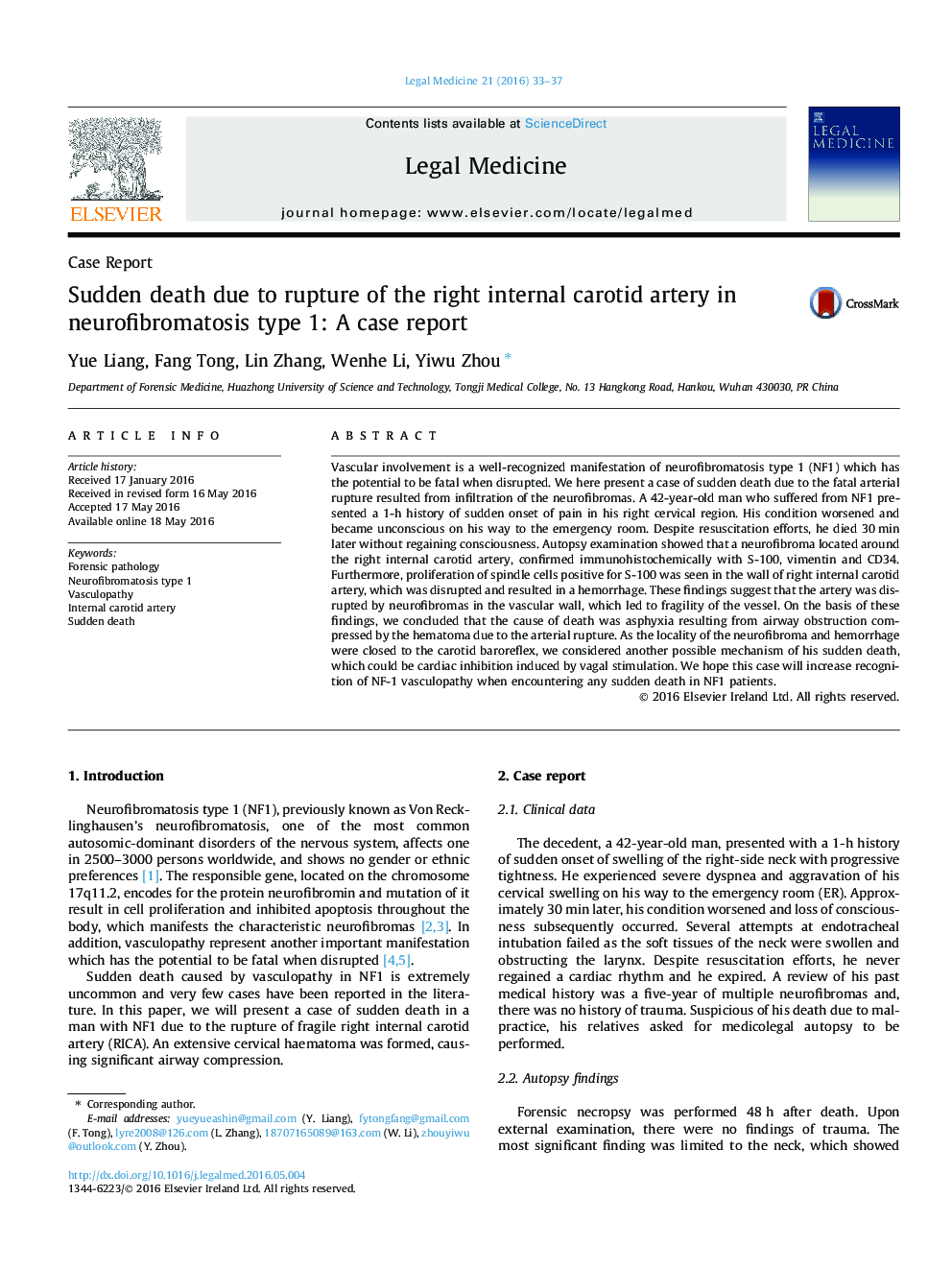 • Sudden death caused by arterial rupture in NF1 is rare in forensic pathology.
• The rupture of affected artery was due to direct invasion by the neurofibromas.
• We share a method to make a correct diagnosis of vasculopathy in NF1.
• Due to bleeding position, the man died of asphyxia rather than hypovolemic shock.
• All the presentation in our report is consistent with the literature.

Vascular involvement is a well-recognized manifestation of neurofibromatosis type 1 (NF1) which has the potential to be fatal when disrupted. We here present a case of sudden death due to the fatal arterial rupture resulted from infiltration of the neurofibromas. A 42-year-old man who suffered from NF1 presented a 1-h history of sudden onset of pain in his right cervical region. His condition worsened and became unconscious on his way to the emergency room. Despite resuscitation efforts, he died 30 min later without regaining consciousness. Autopsy examination showed that a neurofibroma located around the right internal carotid artery, confirmed immunohistochemically with S-100, vimentin and CD34. Furthermore, proliferation of spindle cells positive for S-100 was seen in the wall of right internal carotid artery, which was disrupted and resulted in a hemorrhage. These findings suggest that the artery was disrupted by neurofibromas in the vascular wall, which led to fragility of the vessel. On the basis of these findings, we concluded that the cause of death was asphyxia resulting from airway obstruction compressed by the hematoma due to the arterial rupture. As the locality of the neurofibroma and hemorrhage were closed to the carotid baroreflex, we considered another possible mechanism of his sudden death, which could be cardiac inhibition induced by vagal stimulation. We hope this case will increase recognition of NF-1 vasculopathy when encountering any sudden death in NF1 patients.

Subcutaneous bleeding presented at the right cervical region (A). A large hematoma was found adjacent to carotid bifurcation (asterisk) and there was an oval, off white, fleshy mass inside of it (B: the cut section).Figure optionsDownload high-quality image (298 K)Download as PowerPoint slide