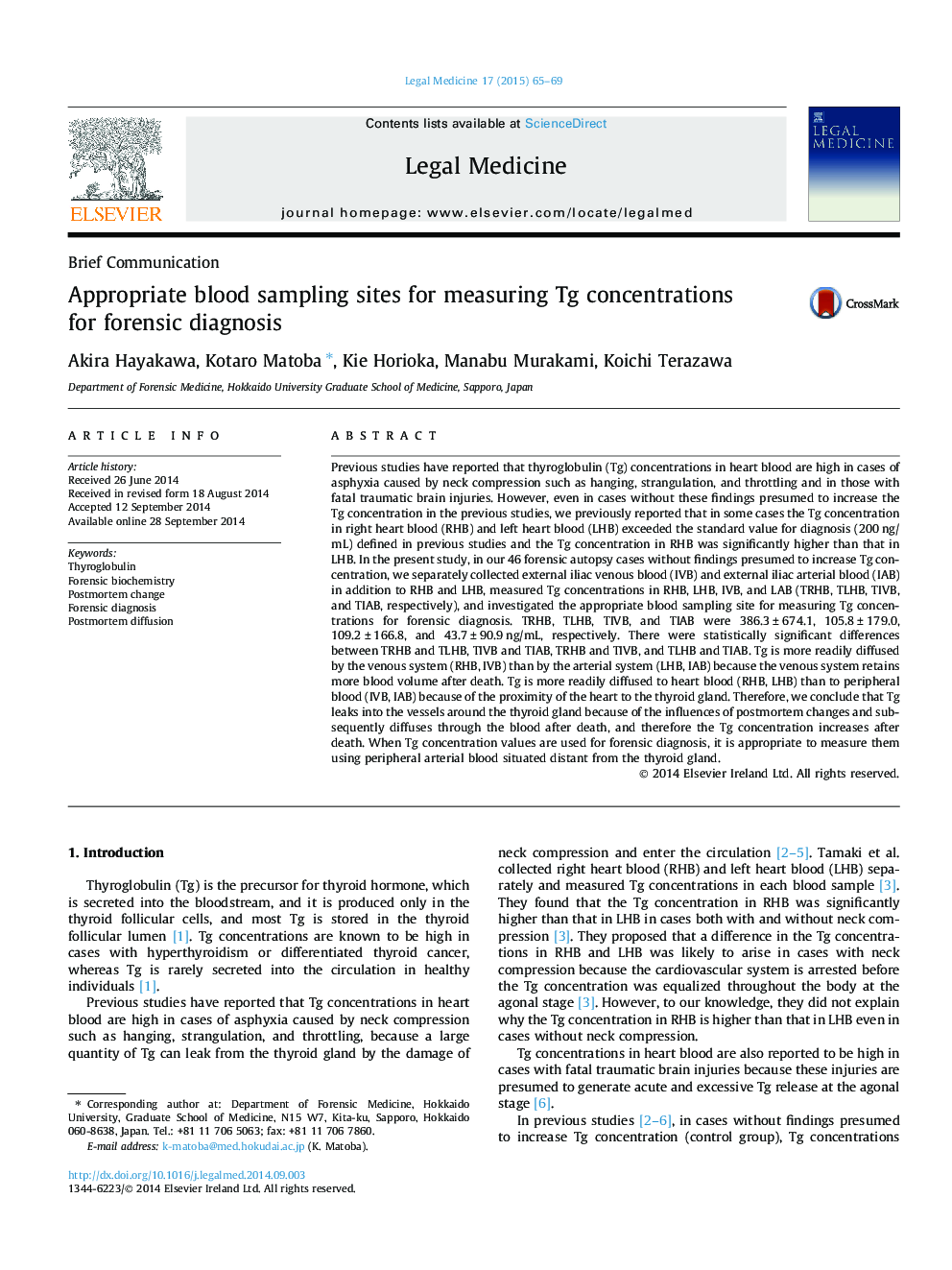 Previous studies have reported that thyroglobulin (Tg) concentrations in heart blood are high in cases of asphyxia caused by neck compression such as hanging, strangulation, and throttling and in those with fatal traumatic brain injuries. However, even in cases without these findings presumed to increase the Tg concentration in the previous studies, we previously reported that in some cases the Tg concentration in right heart blood (RHB) and left heart blood (LHB) exceeded the standard value for diagnosis (200 ng/mL) defined in previous studies and the Tg concentration in RHB was significantly higher than that in LHB. In the present study, in our 46 forensic autopsy cases without findings presumed to increase Tg concentration, we separately collected external iliac venous blood (IVB) and external iliac arterial blood (IAB) in addition to RHB and LHB, measured Tg concentrations in RHB, LHB, IVB, and LAB (TRHB, TLHB, TIVB, and TIAB, respectively), and investigated the appropriate blood sampling site for measuring Tg concentrations for forensic diagnosis. TRHB, TLHB, TIVB, and TIAB were 386.3 ± 674.1, 105.8 ± 179.0, 109.2 ± 166.8, and 43.7 ± 90.9 ng/mL, respectively. There were statistically significant differences between TRHB and TLHB, TIVB and TIAB, TRHB and TIVB, and TLHB and TIAB. Tg is more readily diffused by the venous system (RHB, IVB) than by the arterial system (LHB, IAB) because the venous system retains more blood volume after death. Tg is more readily diffused to heart blood (RHB, LHB) than to peripheral blood (IVB, IAB) because of the proximity of the heart to the thyroid gland. Therefore, we conclude that Tg leaks into the vessels around the thyroid gland because of the influences of postmortem changes and subsequently diffuses through the blood after death, and therefore the Tg concentration increases after death. When Tg concentration values are used for forensic diagnosis, it is appropriate to measure them using peripheral arterial blood situated distant from the thyroid gland.