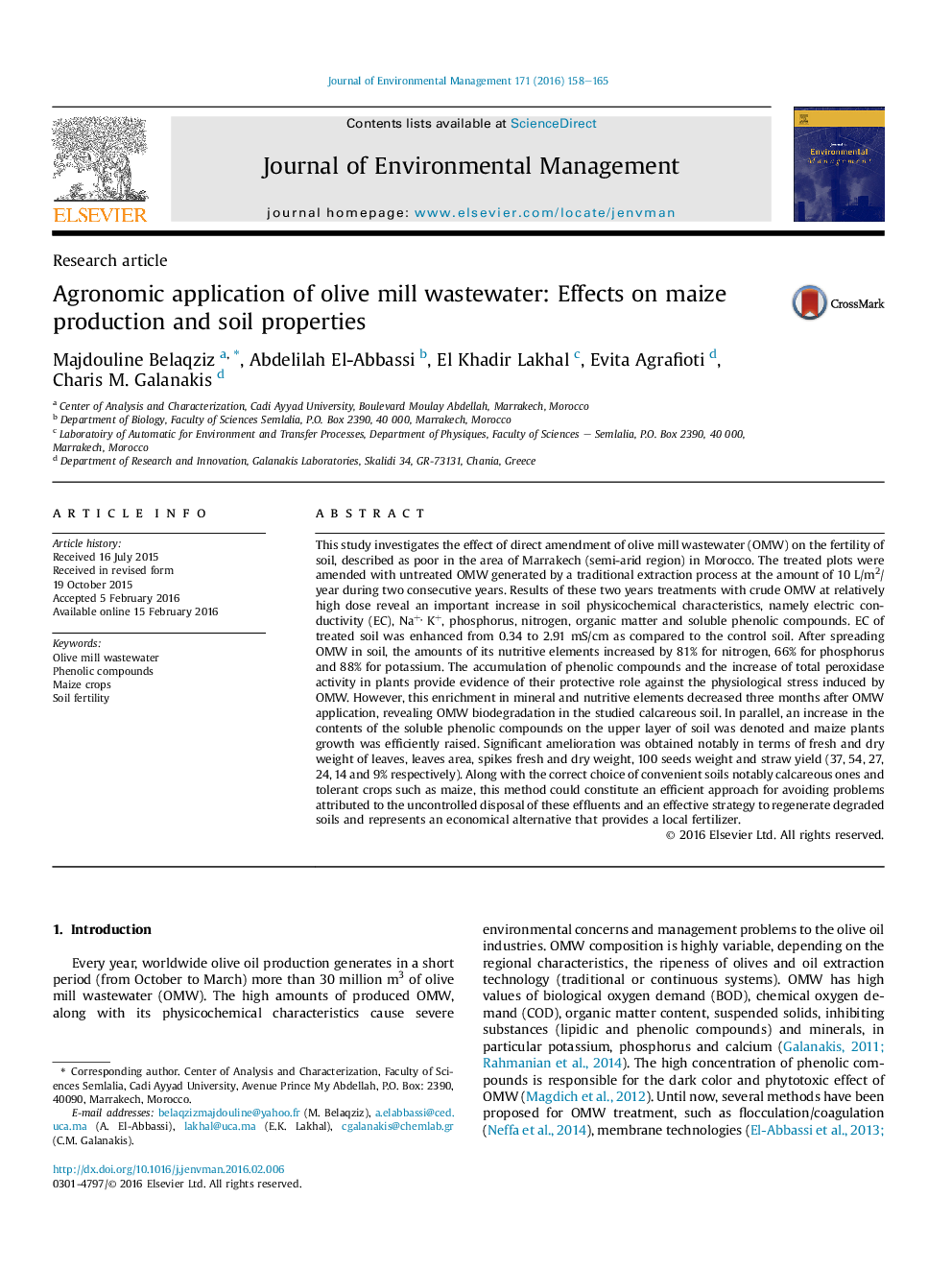 • Land spreading of olive mill wastewater (OMW) was studied for two consecutive years.
• Nutritive elements amounts in the soil increased after OMW spreading by 66–81%.
• Maize plants growth was efficiently raised by OMW inputs.
• OMW should be applied six months before maize sowing for toxicity mitigation.
• A convenient soil and tolerant crops should be chosen for a profitable use of OMW.

This study investigates the effect of direct amendment of olive mill wastewater (OMW) on the fertility of soil, described as poor in the area of Marrakech (semi-arid region) in Morocco. The treated plots were amended with untreated OMW generated by a traditional extraction process at the amount of 10 L/m2/year during two consecutive years. Results of these two years treatments with crude OMW at relatively high dose reveal an important increase in soil physicochemical characteristics, namely electric conductivity (EC), Na+, K+, phosphorus, nitrogen, organic matter and soluble phenolic compounds. EC of treated soil was enhanced from 0.34 to 2.91 mS/cm as compared to the control soil. After spreading OMW in soil, the amounts of its nutritive elements increased by 81% for nitrogen, 66% for phosphorus and 88% for potassium. The accumulation of phenolic compounds and the increase of total peroxidase activity in plants provide evidence of their protective role against the physiological stress induced by OMW. However, this enrichment in mineral and nutritive elements decreased three months after OMW application, revealing OMW biodegradation in the studied calcareous soil. In parallel, an increase in the contents of the soluble phenolic compounds on the upper layer of soil was denoted and maize plants growth was efficiently raised. Significant amelioration was obtained notably in terms of fresh and dry weight of leaves, leaves area, spikes fresh and dry weight, 100 seeds weight and straw yield (37, 54, 27, 24, 14 and 9% respectively). Along with the correct choice of convenient soils notably calcareous ones and tolerant crops such as maize, this method could constitute an efficient approach for avoiding problems attributed to the uncontrolled disposal of these effluents and an effective strategy to regenerate degraded soils and represents an economical alternative that provides a local fertilizer.