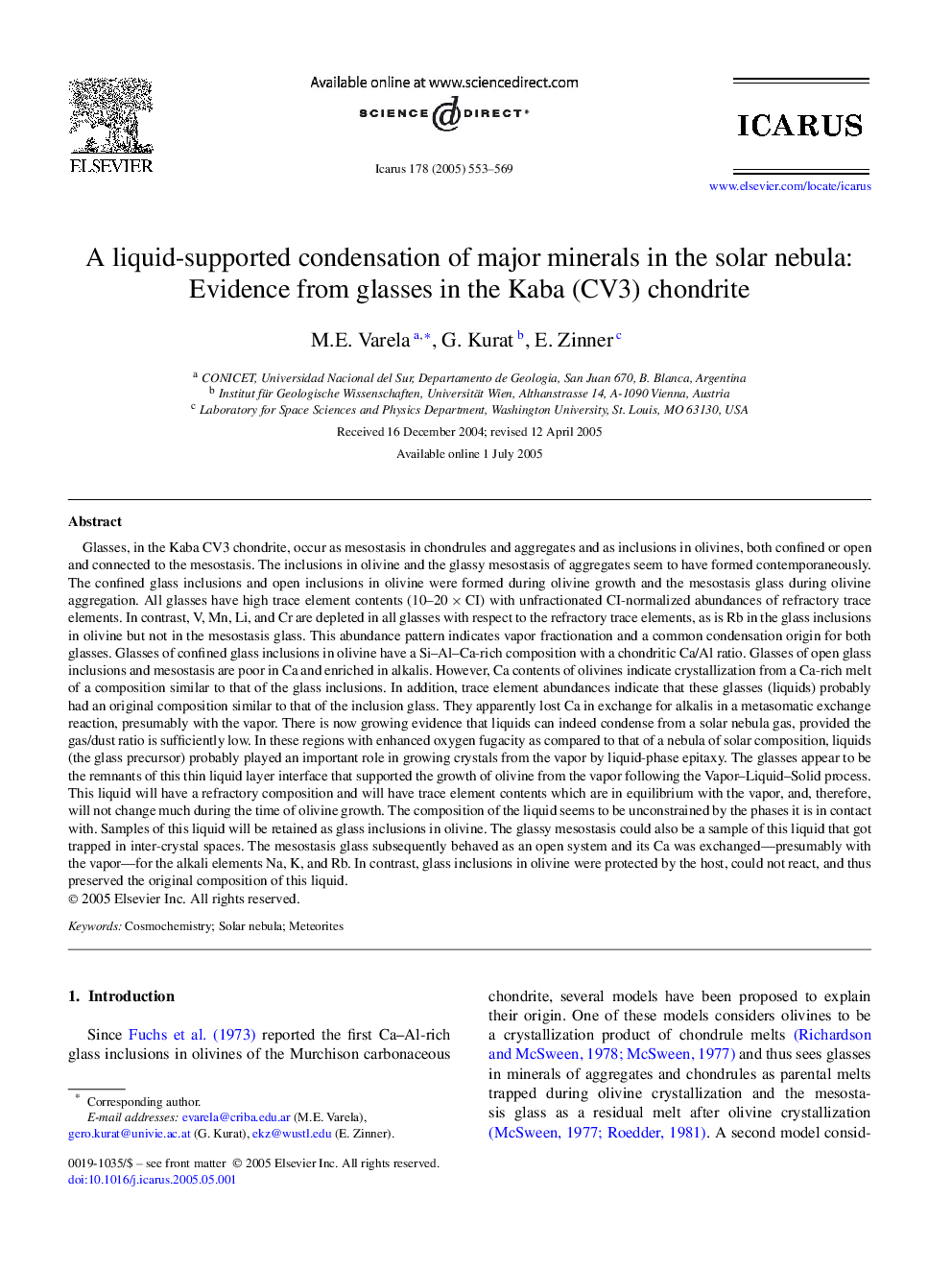 چکیده انگلیسی
Glasses, in the Kaba CV3 chondrite, occur as mesostasis in chondrules and aggregates and as inclusions in olivines, both confined or open and connected to the mesostasis. The inclusions in olivine and the glassy mesostasis of aggregates seem to have formed contemporaneously. The confined glass inclusions and open inclusions in olivine were formed during olivine growth and the mesostasis glass during olivine aggregation. All glasses have high trace element contents (10-20ÃCI) with unfractionated CI-normalized abundances of refractory trace elements. In contrast, V, Mn, Li, and Cr are depleted in all glasses with respect to the refractory trace elements, as is Rb in the glass inclusions in olivine but not in the mesostasis glass. This abundance pattern indicates vapor fractionation and a common condensation origin for both glasses. Glasses of confined glass inclusions in olivine have a SiAlCa-rich composition with a chondritic Ca/Al ratio. Glasses of open glass inclusions and mesostasis are poor in Ca and enriched in alkalis. However, Ca contents of olivines indicate crystallization from a Ca-rich melt of a composition similar to that of the glass inclusions. In addition, trace element abundances indicate that these glasses (liquids) probably had an original composition similar to that of the inclusion glass. They apparently lost Ca in exchange for alkalis in a metasomatic exchange reaction, presumably with the vapor. There is now growing evidence that liquids can indeed condense from a solar nebula gas, provided the gas/dust ratio is sufficiently low. In these regions with enhanced oxygen fugacity as compared to that of a nebula of solar composition, liquids (the glass precursor) probably played an important role in growing crystals from the vapor by liquid-phase epitaxy. The glasses appear to be the remnants of this thin liquid layer interface that supported the growth of olivine from the vapor following the Vapor-Liquid-Solid process. This liquid will have a refractory composition and will have trace element contents which are in equilibrium with the vapor, and, therefore, will not change much during the time of olivine growth. The composition of the liquid seems to be unconstrained by the phases it is in contact with. Samples of this liquid will be retained as glass inclusions in olivine. The glassy mesostasis could also be a sample of this liquid that got trapped in inter-crystal spaces. The mesostasis glass subsequently behaved as an open system and its Ca was exchanged-presumably with the vapor-for the alkali elements Na, K, and Rb. In contrast, glass inclusions in olivine were protected by the host, could not react, and thus preserved the original composition of this liquid.
ناشر
Database: Elsevier - ScienceDirect (ساینس دایرکت)
Journal: Icarus - Volume 178, Issue 2, 15 November 2005, Pages 553-569
نویسندگان
M.E. Varela, G. Kurat, E. Zinner,
دانلود مقاله + سفارش ترجمه
دانلود مقاله ISI انگلیسی
رایگان برای ایرانیان
سفارش ترجمه تخصصی
با تضمین قیمت و کیفیت
منتشر شده در