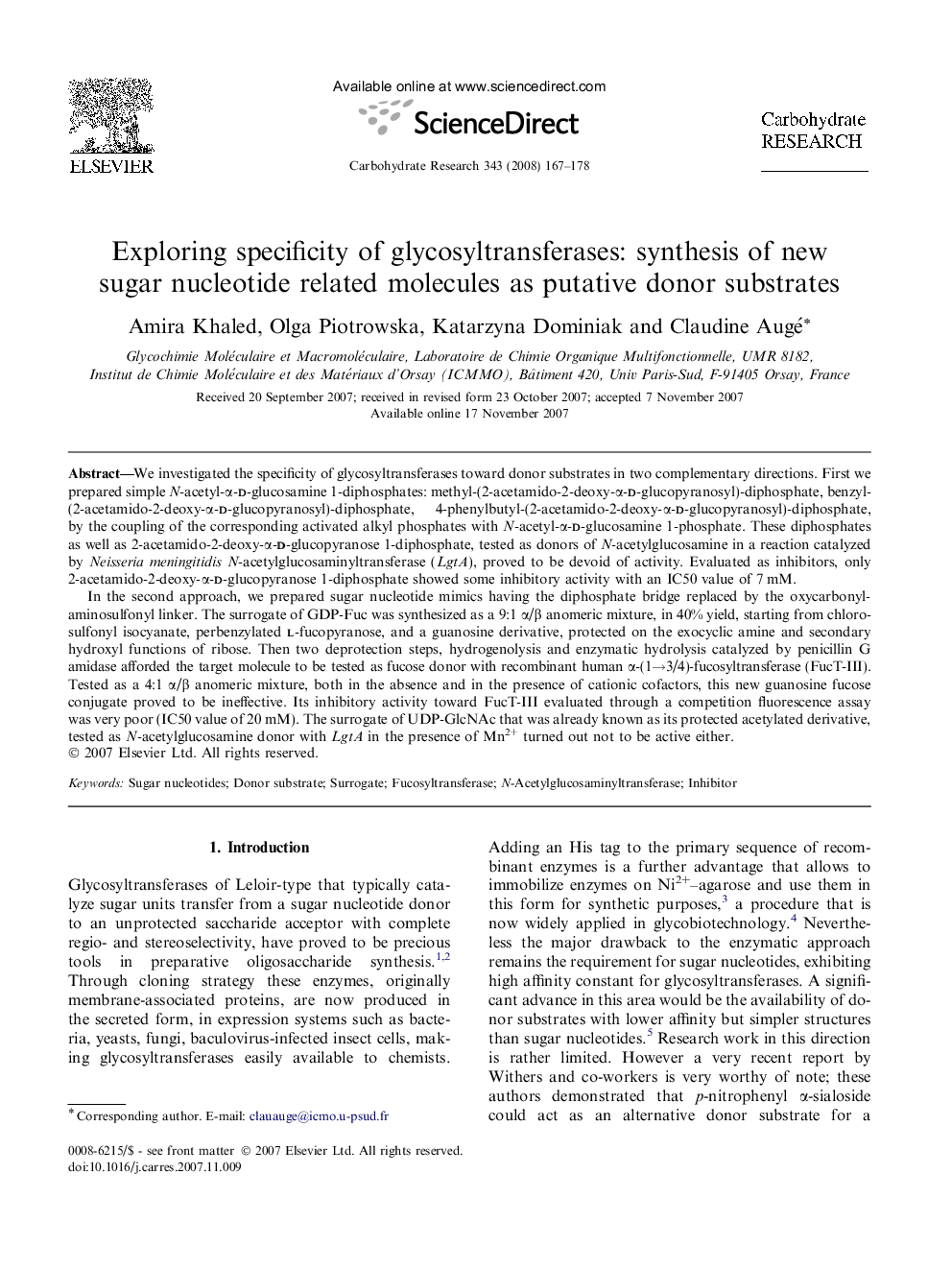 We investigated the specificity of glycosyltransferases toward donor substrates in two complementary directions. First we prepared simple N-acetyl-α-d-glucosamine 1-diphosphates: methyl-(2-acetamido-2-deoxy-α-d-glucopyranosyl)-diphosphate, benzyl-(2-acetamido-2-deoxy-α-d-glucopyranosyl)-diphosphate, 4-phenylbutyl-(2-acetamido-2-deoxy-α-d-glucopyranosyl)-diphosphate, by the coupling of the corresponding activated alkyl phosphates with N-acetyl-α-d-glucosamine 1-phosphate. These diphosphates as well as 2-acetamido-2-deoxy-α-d-glucopyranose 1-diphosphate, tested as donors of N-acetylglucosamine in a reaction catalyzed by Neisseria meningitidis N-acetylglucosaminyltransferase (LgtA), proved to be devoid of activity. Evaluated as inhibitors, only 2-acetamido-2-deoxy-α-d-glucopyranose 1-diphosphate showed some inhibitory activity with an IC50 value of 7 mM.In the second approach, we prepared sugar nucleotide mimics having the diphosphate bridge replaced by the oxycarbonylaminosulfonyl linker. The surrogate of GDP-Fuc was synthesized as a 9:1 α/β anomeric mixture, in 40% yield, starting from chlorosulfonyl isocyanate, perbenzylated l-fucopyranose, and a guanosine derivative, protected on the exocyclic amine and secondary hydroxyl functions of ribose. Then two deprotection steps, hydrogenolysis and enzymatic hydrolysis catalyzed by penicillin G amidase afforded the target molecule to be tested as fucose donor with recombinant human α-(1→3/4)-fucosyltransferase (FucT-III). Tested as a 4:1 α/β anomeric mixture, both in the absence and in the presence of cationic cofactors, this new guanosine fucose conjugate proved to be ineffective. Its inhibitory activity toward FucT-III evaluated through a competition fluorescence assay was very poor (IC50 value of 20 mM). The surrogate of UDP-GlcNAc that was already known as its protected acetylated derivative, tested as N-acetylglucosamine donor with LgtA in the presence of Mn2+ turned out not to be active either.