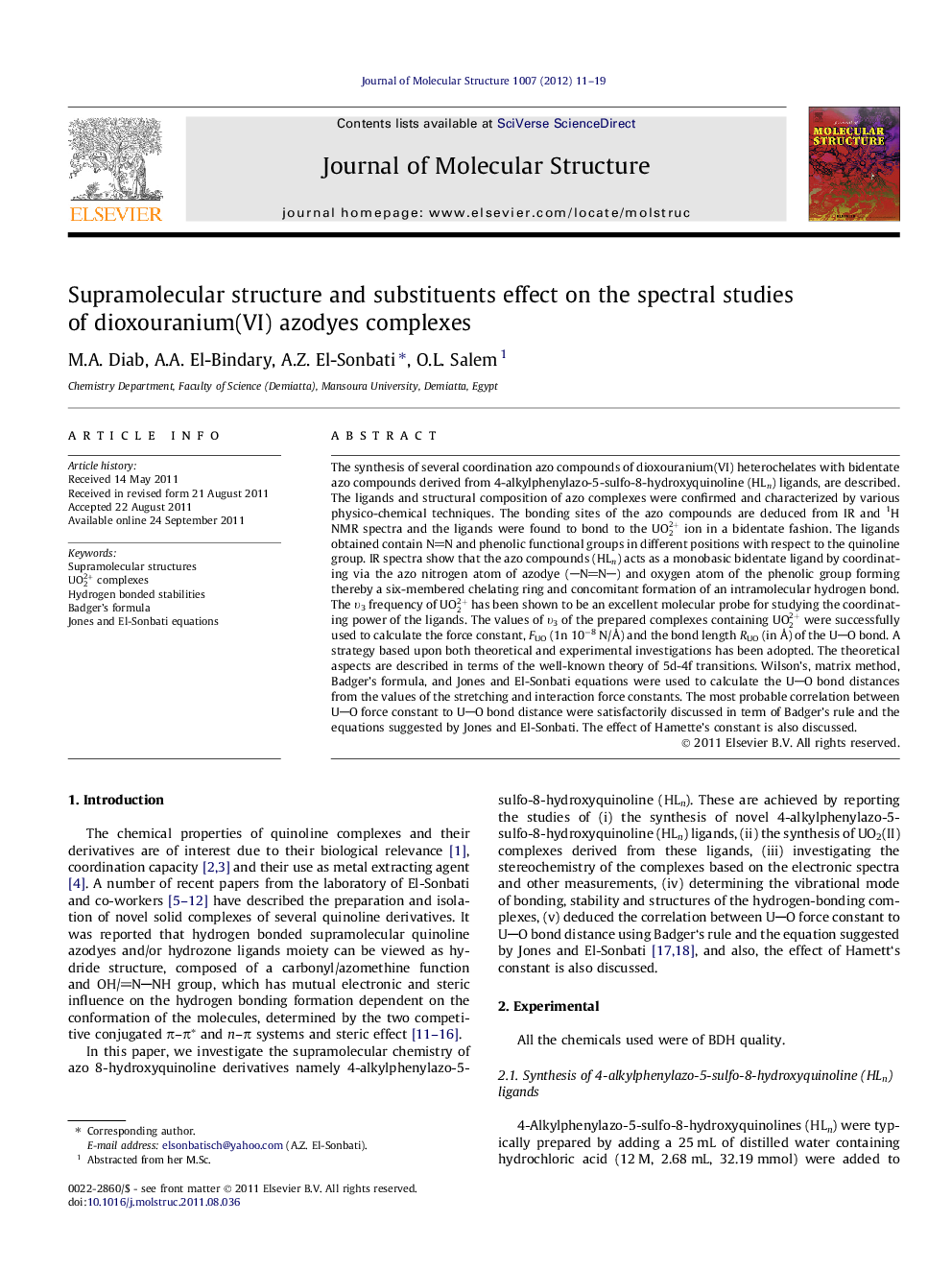 The synthesis of several coordination azo compounds of dioxouranium(VI) heterochelates with bidentate azo compounds derived from 4-alkylphenylazo-5-sulfo-8-hydroxyquinoline (HLn) ligands, are described. The ligands and structural composition of azo complexes were confirmed and characterized by various physico-chemical techniques. The bonding sites of the azo compounds are deduced from IR and 1H NMR spectra and the ligands were found to bond to the UO22+ ion in a bidentate fashion. The ligands obtained contain NN and phenolic functional groups in different positions with respect to the quinoline group. IR spectra show that the azo compounds (HLn) acts as a monobasic bidentate ligand by coordinating via the azo nitrogen atom of azodye (NN) and oxygen atom of the phenolic group forming thereby a six-membered chelating ring and concomitant formation of an intramolecular hydrogen bond. The υ3 frequency of UO22+ has been shown to be an excellent molecular probe for studying the coordinating power of the ligands. The values of υ3 of the prepared complexes containing UO22+ were successfully used to calculate the force constant, FUO (1n 10−8 N/Å) and the bond length RUO (in Å) of the UO bond. A strategy based upon both theoretical and experimental investigations has been adopted. The theoretical aspects are described in terms of the well-known theory of 5d-4f transitions. Wilson’s, matrix method, Badger’s formula, and Jones and El-Sonbati equations were used to calculate the UO bond distances from the values of the stretching and interaction force constants. The most probable correlation between UO force constant to UO bond distance were satisfactorily discussed in term of Badger’s rule and the equations suggested by Jones and El-Sonbati. The effect of Hamette’s constant is also discussed.

► HLn behaves as a chelating bidentate monobasic ligand, through azodye (NN) and oxygen atom of the phenolic group.
► The increases of the positive charge of the metal in the complexes.
► The electron donating substituents increase the electron density of the metal.