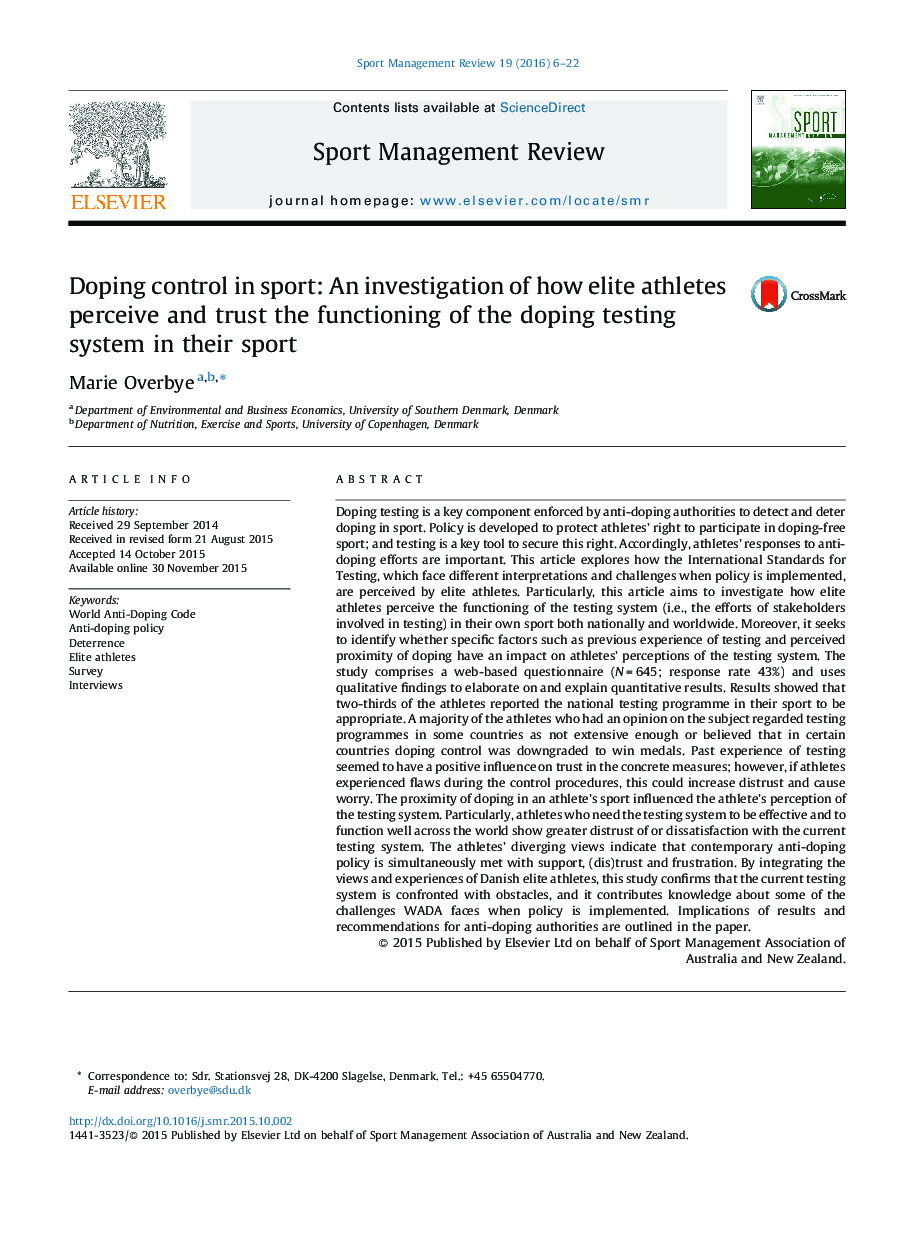 • Investigates how elite athletes perceive the doping testing system in their sport.
• Two-thirds of the athletes were satisfied with the national testing regime.
• A majority believed that in certain countries doping control was sometimes downgraded in order to win medals.
• Provides insight into why some athletes distrust the testing system or find it less effective as a deterrent.
• Contributes knowledge to some of the challenges WADA faces when policy is implemented.

Doping testing is a key component enforced by anti-doping authorities to detect and deter doping in sport. Policy is developed to protect athletes’ right to participate in doping-free sport; and testing is a key tool to secure this right. Accordingly, athletes’ responses to anti-doping efforts are important. This article explores how the International Standards for Testing, which face different interpretations and challenges when policy is implemented, are perceived by elite athletes. Particularly, this article aims to investigate how elite athletes perceive the functioning of the testing system (i.e., the efforts of stakeholders involved in testing) in their own sport both nationally and worldwide. Moreover, it seeks to identify whether specific factors such as previous experience of testing and perceived proximity of doping have an impact on athletes’ perceptions of the testing system. The study comprises a web-based questionnaire (N = 645; response rate 43%) and uses qualitative findings to elaborate on and explain quantitative results. Results showed that two-thirds of the athletes reported the national testing programme in their sport to be appropriate. A majority of the athletes who had an opinion on the subject regarded testing programmes in some countries as not extensive enough or believed that in certain countries doping control was downgraded to win medals. Past experience of testing seemed to have a positive influence on trust in the concrete measures; however, if athletes experienced flaws during the control procedures, this could increase distrust and cause worry. The proximity of doping in an athlete's sport influenced the athlete's perception of the testing system. Particularly, athletes who need the testing system to be effective and to function well across the world show greater distrust of or dissatisfaction with the current testing system. The athletes’ diverging views indicate that contemporary anti-doping policy is simultaneously met with support, (dis)trust and frustration. By integrating the views and experiences of Danish elite athletes, this study confirms that the current testing system is confronted with obstacles, and it contributes knowledge about some of the challenges WADA faces when policy is implemented. Implications of results and recommendations for anti-doping authorities are outlined in the paper.