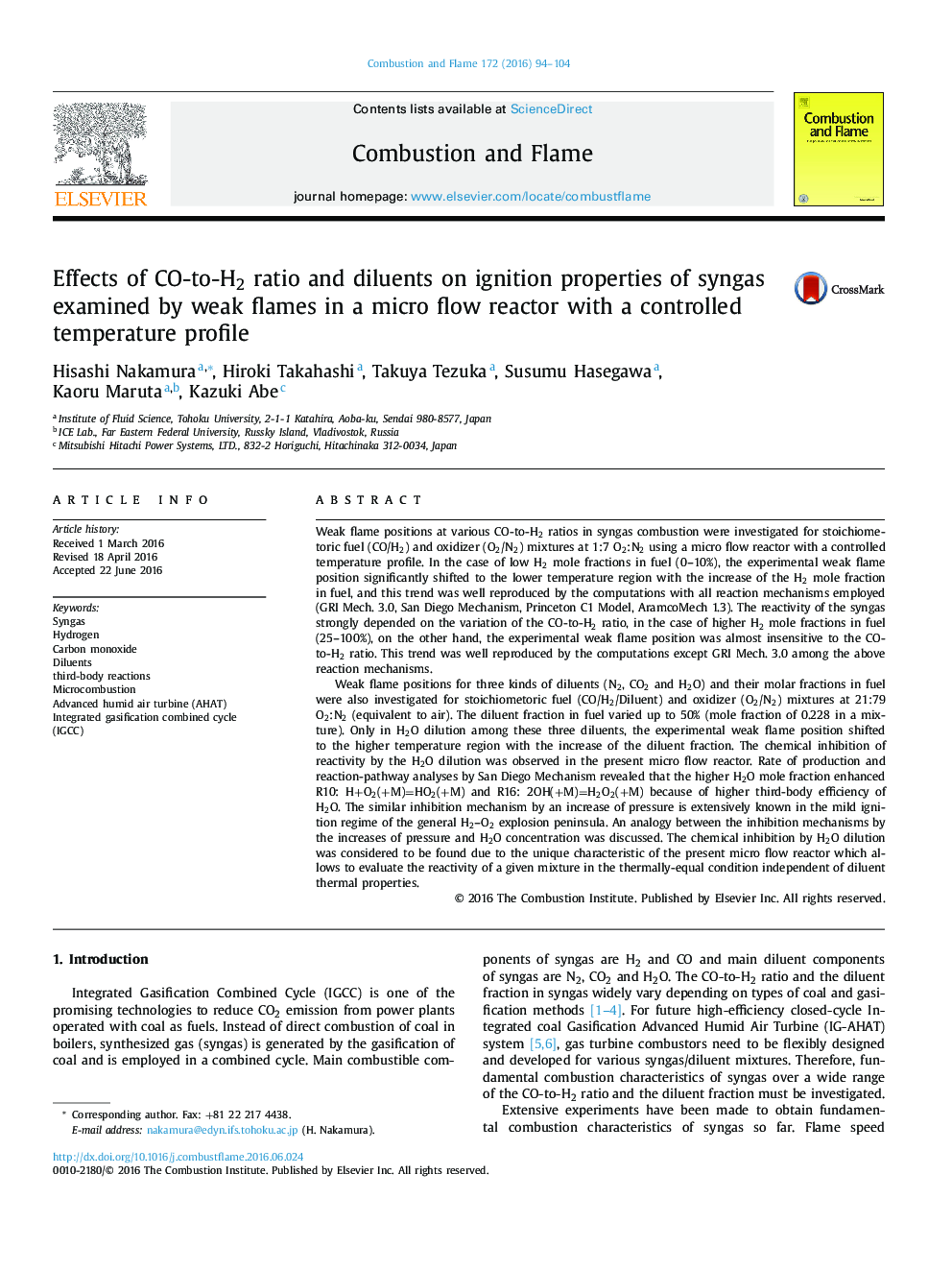 Weak flame positions at various CO-to-H2 ratios in syngas combustion were investigated for stoichiometoric fuel (CO/H2) and oxidizer (O2/N2) mixtures at 1:7 O2:N2 using a micro flow reactor with a controlled temperature profile. In the case of low H2 mole fractions in fuel (0–10%), the experimental weak flame position significantly shifted to the lower temperature region with the increase of the H2 mole fraction in fuel, and this trend was well reproduced by the computations with all reaction mechanisms employed (GRI Mech. 3.0, San Diego Mechanism, Princeton C1 Model, AramcoMech 1.3). The reactivity of the syngas strongly depended on the variation of the CO-to-H2 ratio, in the case of higher H2 mole fractions in fuel (25–100%), on the other hand, the experimental weak flame position was almost insensitive to the CO-to-H2 ratio. This trend was well reproduced by the computations except GRI Mech. 3.0 among the above reaction mechanisms.Weak flame positions for three kinds of diluents (N2, CO2 and H2O) and their molar fractions in fuel were also investigated for stoichiometoric fuel (CO/H2/Diluent) and oxidizer (O2/N2) mixtures at 21:79 O2:N2 (equivalent to air). The diluent fraction in fuel varied up to 50% (mole fraction of 0.228 in a mixture). Only in H2O dilution among these three diluents, the experimental weak flame position shifted to the higher temperature region with the increase of the diluent fraction. The chemical inhibition of reactivity by the H2O dilution was observed in the present micro flow reactor. Rate of production and reaction-pathway analyses by San Diego Mechanism revealed that the higher H2O mole fraction enhanced R10: H+O2(+M)=HO2(+M) and R16: 2OH(+M)=H2O2(+M) because of higher third-body efficiency of H2O. The similar inhibition mechanism by an increase of pressure is extensively known in the mild ignition regime of the general H2–O2 explosion peninsula. An analogy between the inhibition mechanisms by the increases of pressure and H2O concentration was discussed. The chemical inhibition by H2O dilution was considered to be found due to the unique characteristic of the present micro flow reactor which allows to evaluate the reactivity of a given mixture in the thermally-equal condition independent of diluent thermal properties.