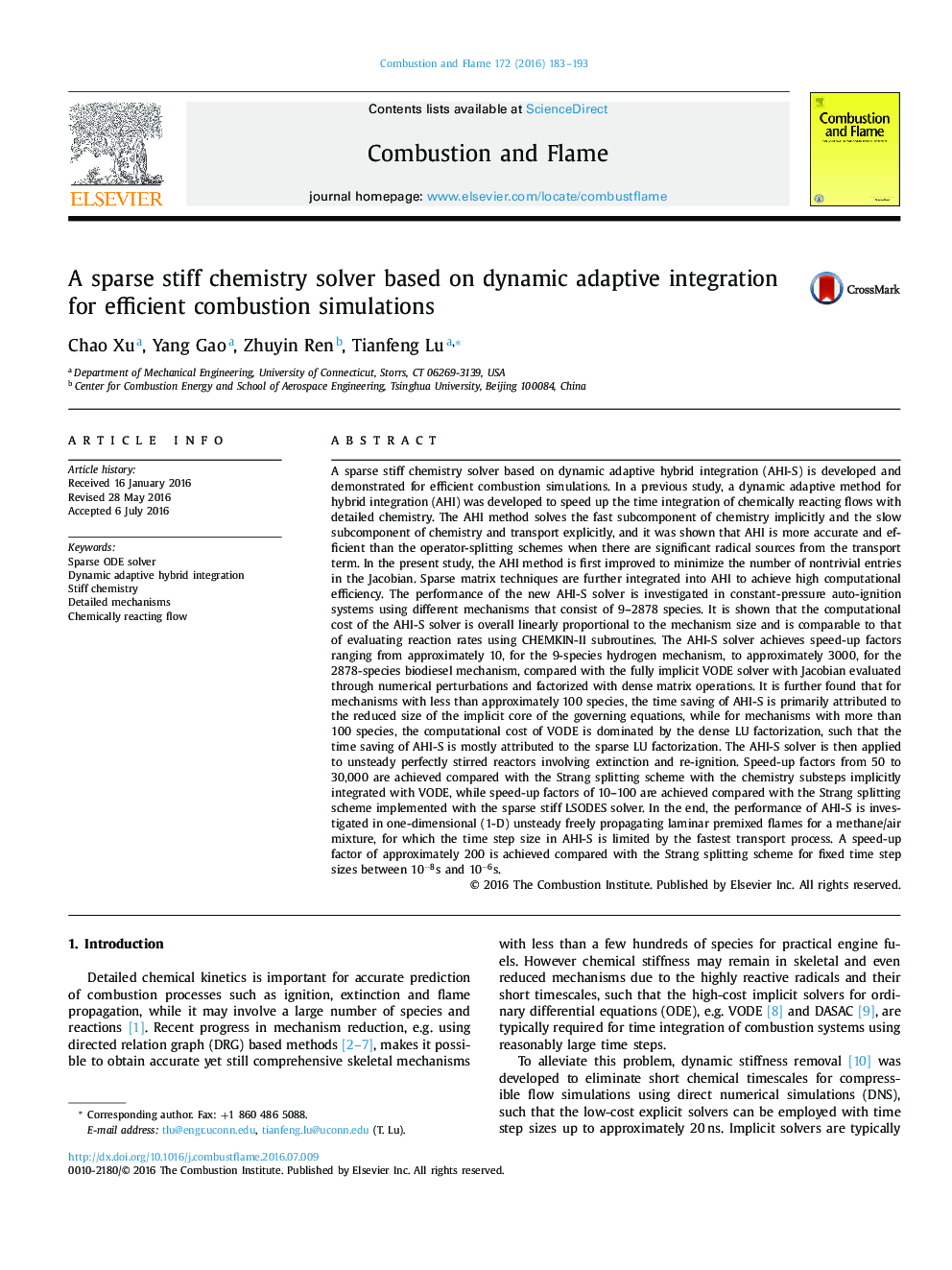 A sparse stiff chemistry solver based on dynamic adaptive hybrid integration (AHI-S) is developed and demonstrated for efficient combustion simulations. In a previous study, a dynamic adaptive method for hybrid integration (AHI) was developed to speed up the time integration of chemically reacting flows with detailed chemistry. The AHI method solves the fast subcomponent of chemistry implicitly and the slow subcomponent of chemistry and transport explicitly, and it was shown that AHI is more accurate and efficient than the operator-splitting schemes when there are significant radical sources from the transport term. In the present study, the AHI method is first improved to minimize the number of nontrivial entries in the Jacobian. Sparse matrix techniques are further integrated into AHI to achieve high computational efficiency. The performance of the new AHI-S solver is investigated in constant-pressure auto-ignition systems using different mechanisms that consist of 9–2878 species. It is shown that the computational cost of the AHI-S solver is overall linearly proportional to the mechanism size and is comparable to that of evaluating reaction rates using CHEMKIN-II subroutines. The AHI-S solver achieves speed-up factors ranging from approximately 10, for the 9-species hydrogen mechanism, to approximately 3000, for the 2878-species biodiesel mechanism, compared with the fully implicit VODE solver with Jacobian evaluated through numerical perturbations and factorized with dense matrix operations. It is further found that for mechanisms with less than approximately 100 species, the time saving of AHI-S is primarily attributed to the reduced size of the implicit core of the governing equations, while for mechanisms with more than 100 species, the computational cost of VODE is dominated by the dense LU factorization, such that the time saving of AHI-S is mostly attributed to the sparse LU factorization. The AHI-S solver is then applied to unsteady perfectly stirred reactors involving extinction and re-ignition. Speed-up factors from 50 to 30,000 are achieved compared with the Strang splitting scheme with the chemistry substeps implicitly integrated with VODE, while speed-up factors of 10–100 are achieved compared with the Strang splitting scheme implemented with the sparse stiff LSODES solver. In the end, the performance of AHI-S is investigated in one-dimensional (1-D) unsteady freely propagating laminar premixed flames for a methane/air mixture, for which the time step size in AHI-S is limited by the fastest transport process. A speed-up factor of approximately 200 is achieved compared with the Strang splitting scheme for fixed time step sizes between 10−810−8s and 10−610−6s.