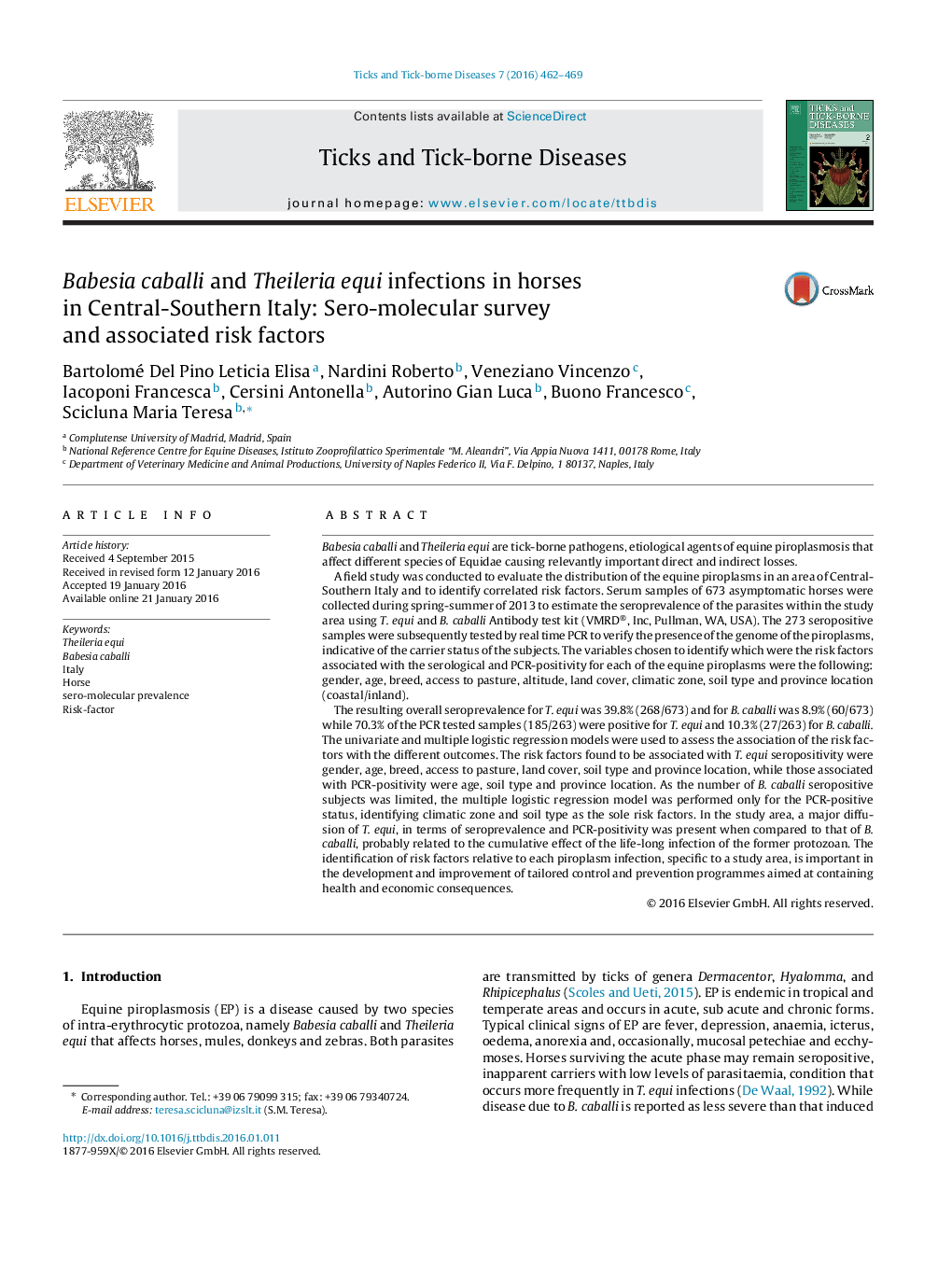 • In the study area, sero-molecular prevalence of T. equi was higher than B. caballi.
• New aspects of environmental conditions were studied.
• Specific risk factors were identified for equine piroplasms.
• A cluster infection was found for both piroplasms probably due to local conditions.

Babesia caballi and Theileria equi are tick-borne pathogens, etiological agents of equine piroplasmosis that affect different species of Equidae causing relevantly important direct and indirect losses.A field study was conducted to evaluate the distribution of the equine piroplasms in an area of Central-Southern Italy and to identify correlated risk factors. Serum samples of 673 asymptomatic horses were collected during spring-summer of 2013 to estimate the seroprevalence of the parasites within the study area using T. equi and B. caballi Antibody test kit (VMRD®, Inc, Pullman, WA, USA). The 273 seropositive samples were subsequently tested by real time PCR to verify the presence of the genome of the piroplasms, indicative of the carrier status of the subjects. The variables chosen to identify which were the risk factors associated with the serological and PCR-positivity for each of the equine piroplasms were the following: gender, age, breed, access to pasture, altitude, land cover, climatic zone, soil type and province location (coastal/inland).The resulting overall seroprevalence for T. equi was 39.8% (268/673) and for B. caballi was 8.9% (60/673) while 70.3% of the PCR tested samples (185/263) were positive for T. equi and 10.3% (27/263) for B. caballi. The univariate and multiple logistic regression models were used to assess the association of the risk factors with the different outcomes. The risk factors found to be associated with T. equi seropositivity were gender, age, breed, access to pasture, land cover, soil type and province location, while those associated with PCR-positivity were age, soil type and province location. As the number of B. caballi seropositive subjects was limited, the multiple logistic regression model was performed only for the PCR-positive status, identifying climatic zone and soil type as the sole risk factors. In the study area, a major diffusion of T. equi, in terms of seroprevalence and PCR-positivity was present when compared to that of B. caballi, probably related to the cumulative effect of the life-long infection of the former protozoan. The identification of risk factors relative to each piroplasm infection, specific to a study area, is important in the development and improvement of tailored control and prevention programmes aimed at containing health and economic consequences.