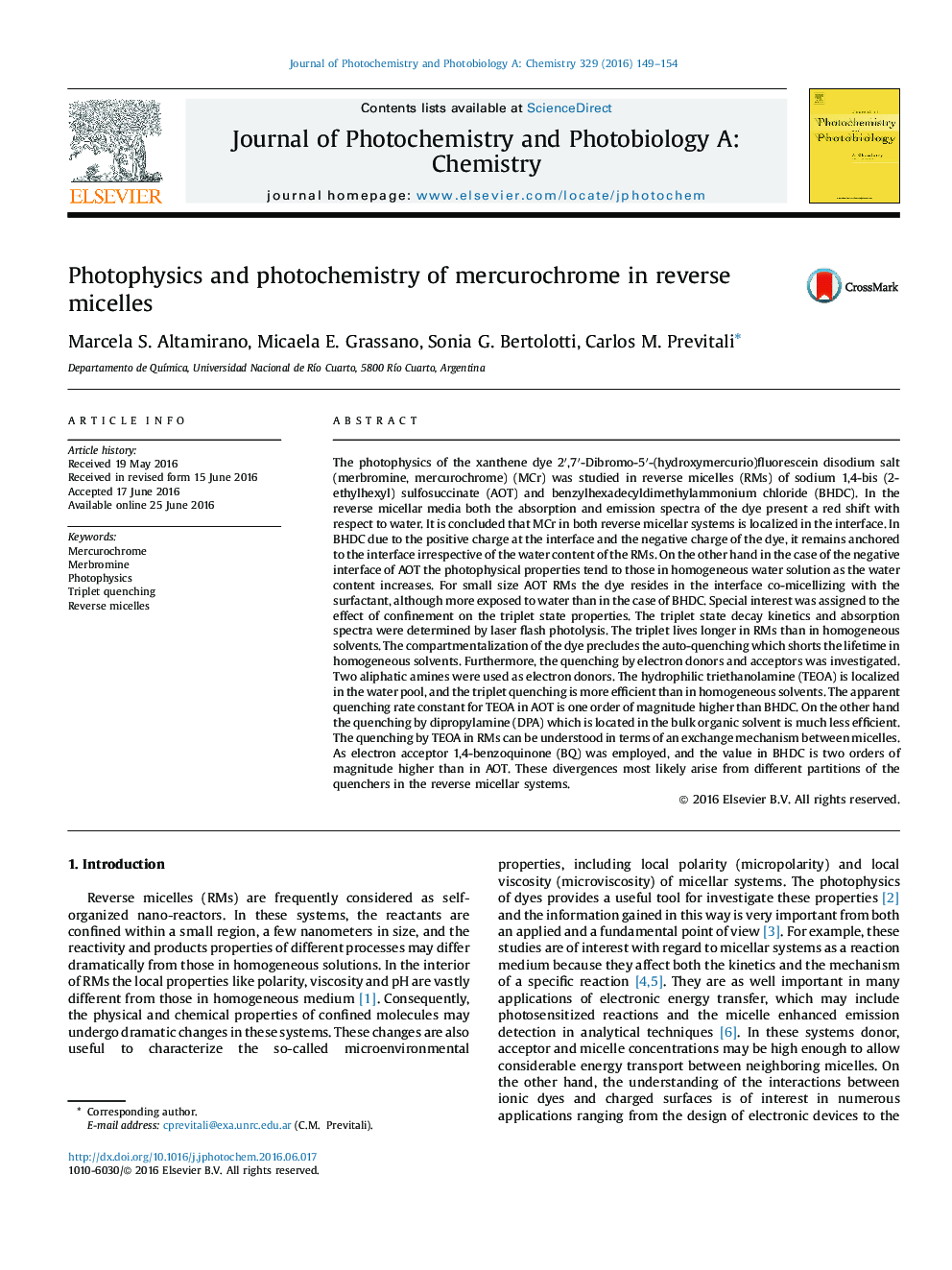 • The photophysics of Mercurochrome (merbromin) was investigated in reverse micelles (RMs) of AOT and BHDC.
• The dye localizes in the interface in both anionic, AOT and cationic, BHDC, RMs. In the later it is in near contact with the bulk organic phase.
• In BHDC the photophysical parameters are independent of the water content of the RMs.
• Triplet quenching rate constants by tri-ethanolamine, dipropylamine and 1,4-benzoquinone were determined in MeOH and in RMs.
• Triplet quenching by BQ is two orders of magnitude more effective in BHDC than in AOT.

The photophysics of the xanthene dye 2′,7′-Dibromo-5′-(hydroxymercurio)fluorescein disodium salt (merbromine, mercurochrome) (MCr) was studied in reverse micelles (RMs) of sodium 1,4-bis (2-ethylhexyl) sulfosuccinate (AOT) and benzylhexadecyldimethylammonium chloride (BHDC). In the reverse micellar media both the absorption and emission spectra of the dye present a red shift with respect to water. It is concluded that MCr in both reverse micellar systems is localized in the interface. In BHDC due to the positive charge at the interface and the negative charge of the dye, it remains anchored to the interface irrespective of the water content of the RMs. On the other hand in the case of the negative interface of AOT the photophysical properties tend to those in homogeneous water solution as the water content increases. For small size AOT RMs the dye resides in the interface co-micellizing with the surfactant, although more exposed to water than in the case of BHDC. Special interest was assigned to the effect of confinement on the triplet state properties. The triplet state decay kinetics and absorption spectra were determined by laser flash photolysis. The triplet lives longer in RMs than in homogeneous solvents. The compartmentalization of the dye precludes the auto-quenching which shorts the lifetime in homogeneous solvents. Furthermore, the quenching by electron donors and acceptors was investigated. Two aliphatic amines were used as electron donors. The hydrophilic triethanolamine (TEOA) is localized in the water pool, and the triplet quenching is more efficient than in homogeneous solvents. The apparent quenching rate constant for TEOA in AOT is one order of magnitude higher than BHDC. On the other hand the quenching by dipropylamine (DPA) which is located in the bulk organic solvent is much less efficient. The quenching by TEOA in RMs can be understood in terms of an exchange mechanism between micelles. As electron acceptor 1,4-benzoquinone (BQ) was employed, and the value in BHDC is two orders of magnitude higher than in AOT. These divergences most likely arise from different partitions of the quenchers in the reverse micellar systems.