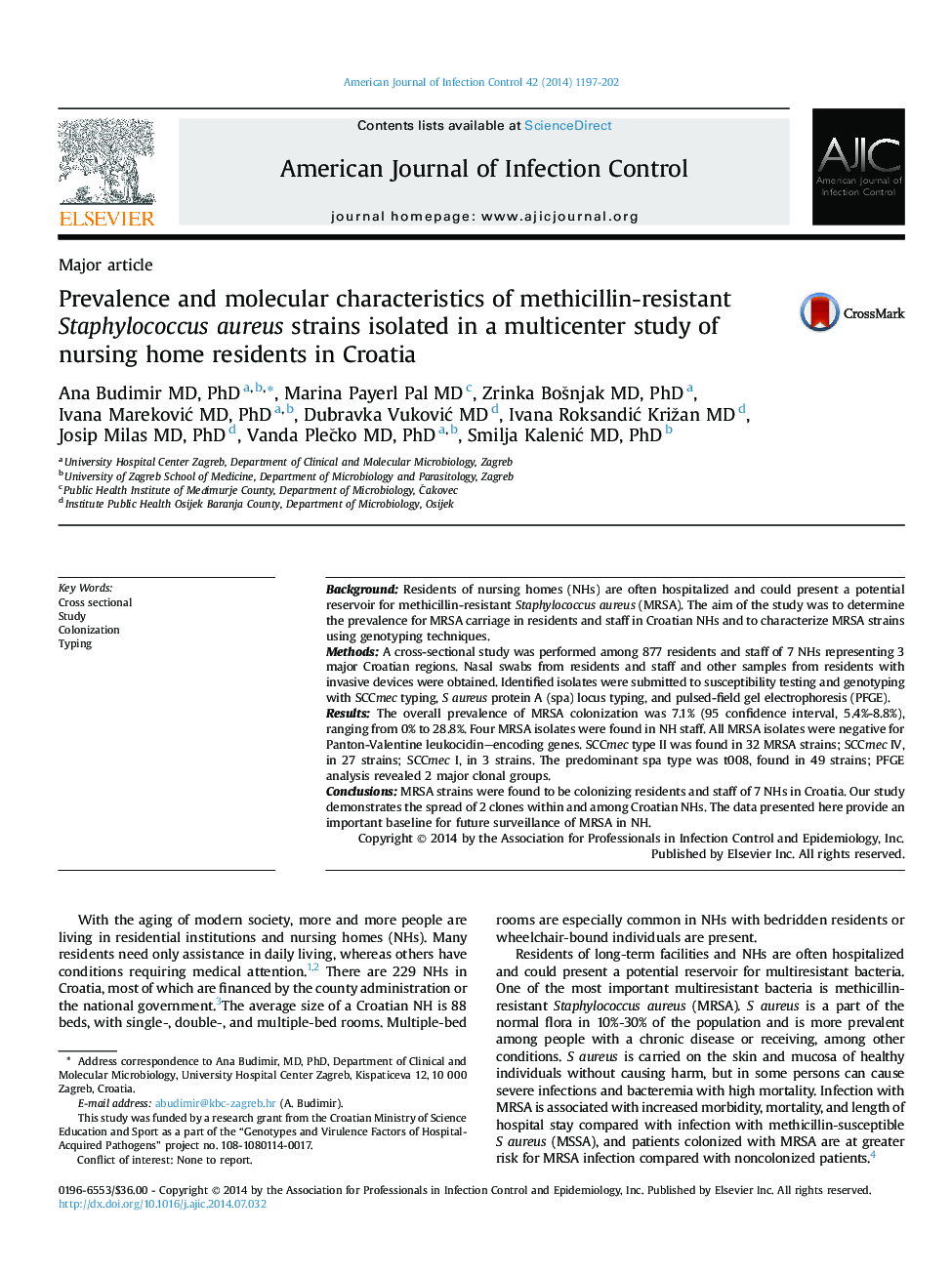 • This cross-sectional study investigated the prevalence of methicillin-resistant Staphylococcus aureus (MRSA) carriage in 877 residents and staff of 7 nursing homes in Croatia.
• The overall prevalence of MRSA colonization was 7.1%, and the dominant SCCmec types were II and IV.
• All MRSA isolates were negative for Panton-Valentine leukocidin–encoding genes. The predominant S aureus protein A type was t008.
• Our study demonstrates the spread of 2 clones within and among Croatian nursing homes.

BackgroundResidents of nursing homes (NHs) are often hospitalized and could present a potential reservoir for methicillin-resistant Staphylococcus aureus (MRSA). The aim of the study was to determine the prevalence for MRSA carriage in residents and staff in Croatian NHs and to characterize MRSA strains using genotyping techniques.MethodsA cross-sectional study was performed among 877 residents and staff of 7 NHs representing 3 major Croatian regions. Nasal swabs from residents and staff and other samples from residents with invasive devices were obtained. Identified isolates were submitted to susceptibility testing and genotyping with SCCmec typing, S aureus protein A (spa) locus typing, and pulsed-field gel electrophoresis (PFGE).ResultsThe overall prevalence of MRSA colonization was 7.1% (95 confidence interval, 5.4%-8.8%), ranging from 0% to 28.8%. Four MRSA isolates were found in NH staff. All MRSA isolates were negative for Panton-Valentine leukocidin–encoding genes. SCCmec type II was found in 32 MRSA strains; SCCmec IV, in 27 strains; SCCmec I, in 3 strains. The predominant spa type was t008, found in 49 strains; PFGE analysis revealed 2 major clonal groups.ConclusionsMRSA strains were found to be colonizing residents and staff of 7 NHs in Croatia. Our study demonstrates the spread of 2 clones within and among Croatian NHs. The data presented here provide an important baseline for future surveillance of MRSA in NH.