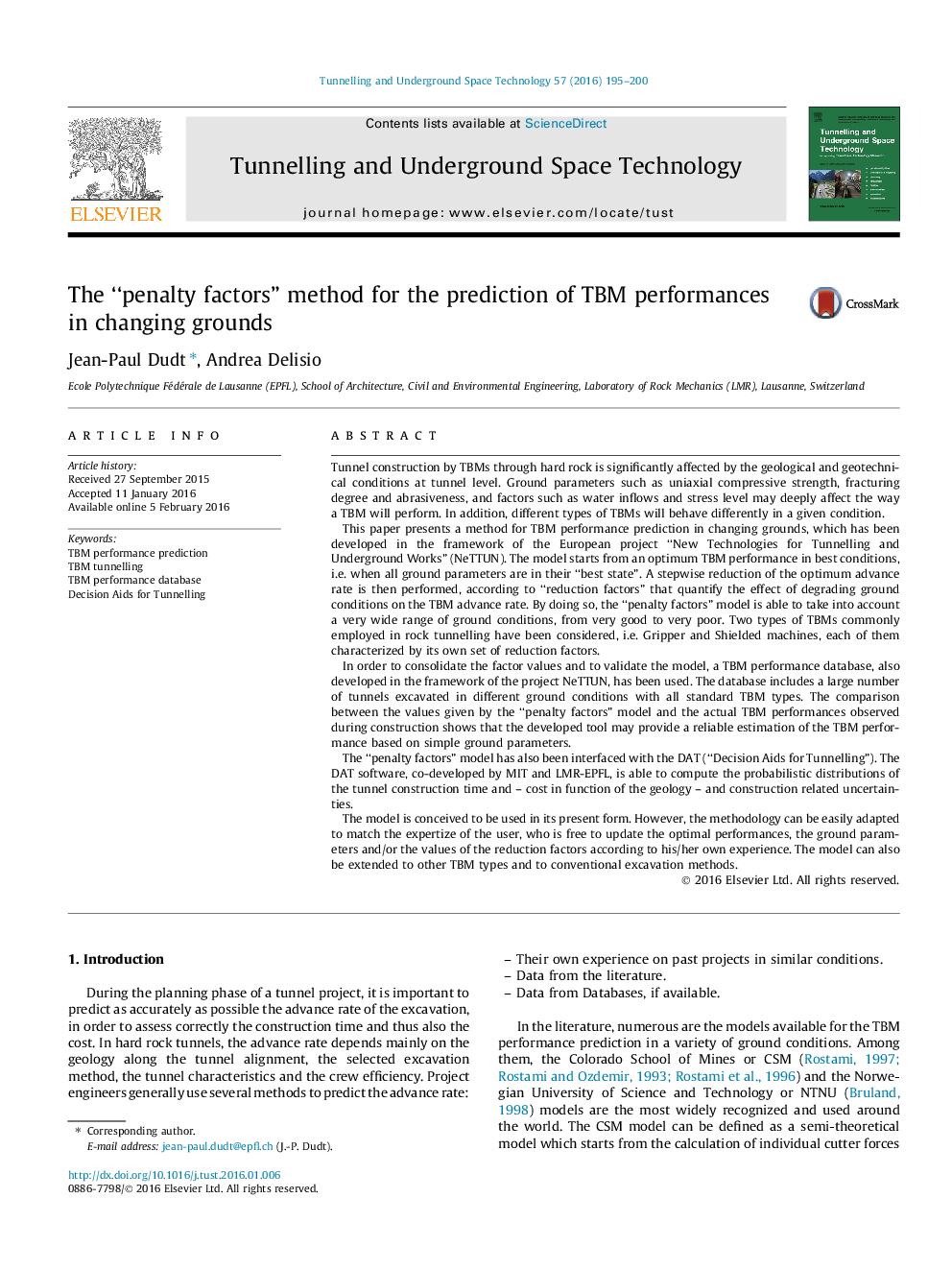 Tunnel construction by TBMs through hard rock is significantly affected by the geological and geotechnical conditions at tunnel level. Ground parameters such as uniaxial compressive strength, fracturing degree and abrasiveness, and factors such as water inflows and stress level may deeply affect the way a TBM will perform. In addition, different types of TBMs will behave differently in a given condition.This paper presents a method for TBM performance prediction in changing grounds, which has been developed in the framework of the European project “New Technologies for Tunnelling and Underground Works” (NeTTUN). The model starts from an optimum TBM performance in best conditions, i.e. when all ground parameters are in their “best state”. A stepwise reduction of the optimum advance rate is then performed, according to “reduction factors” that quantify the effect of degrading ground conditions on the TBM advance rate. By doing so, the “penalty factors” model is able to take into account a very wide range of ground conditions, from very good to very poor. Two types of TBMs commonly employed in rock tunnelling have been considered, i.e. Gripper and Shielded machines, each of them characterized by its own set of reduction factors.In order to consolidate the factor values and to validate the model, a TBM performance database, also developed in the framework of the project NeTTUN, has been used. The database includes a large number of tunnels excavated in different ground conditions with all standard TBM types. The comparison between the values given by the “penalty factors” model and the actual TBM performances observed during construction shows that the developed tool may provide a reliable estimation of the TBM performance based on simple ground parameters.The “penalty factors” model has also been interfaced with the DAT (“Decision Aids for Tunnelling”). The DAT software, co-developed by MIT and LMR-EPFL, is able to compute the probabilistic distributions of the tunnel construction time and – cost in function of the geology – and construction related uncertainties.The model is conceived to be used in its present form. However, the methodology can be easily adapted to match the expertize of the user, who is free to update the optimal performances, the ground parameters and/or the values of the reduction factors according to his/her own experience. The model can also be extended to other TBM types and to conventional excavation methods.