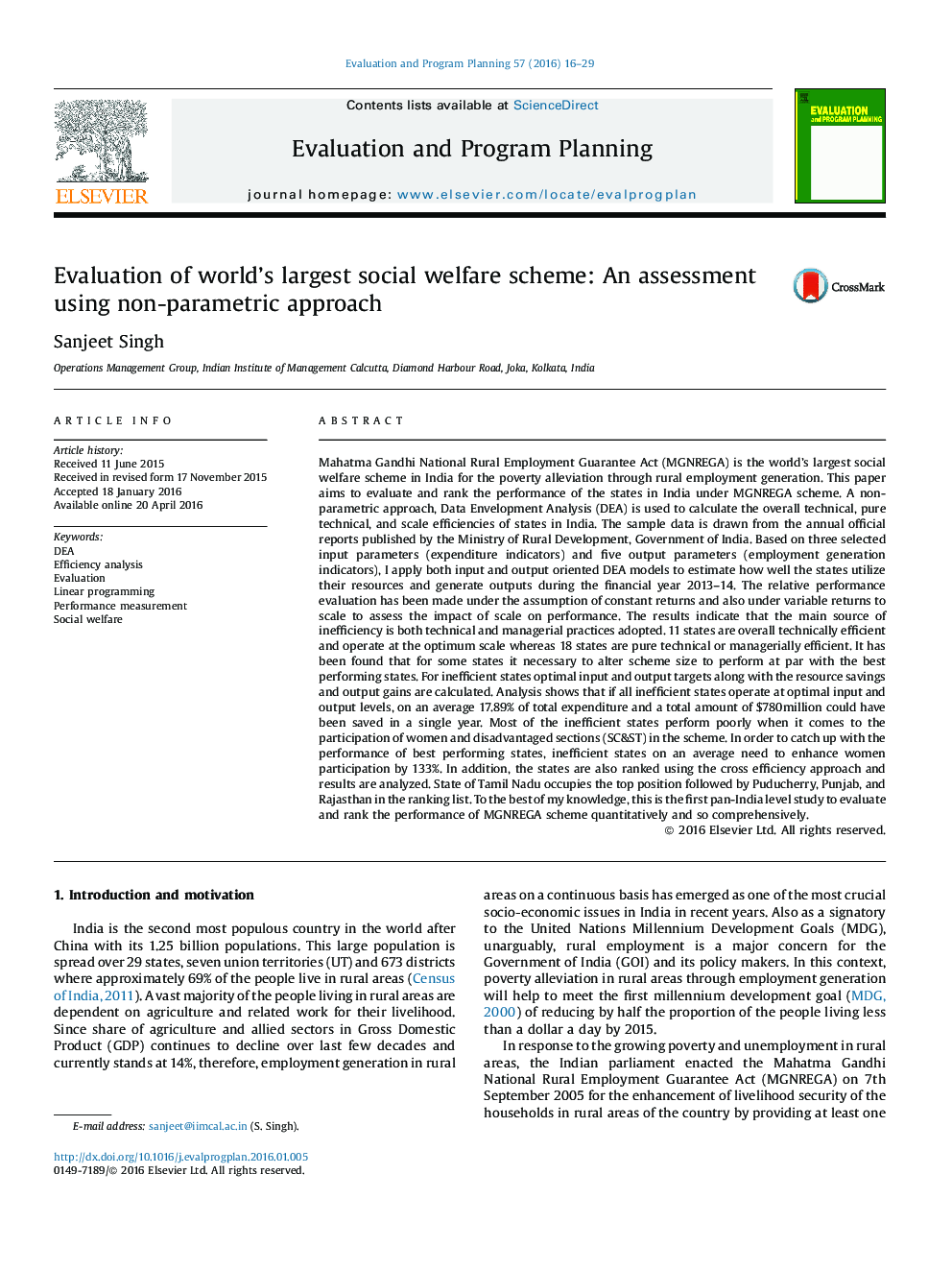 • Performance of world’s largest social welfare scheme has been evaluated.
• First attempt to evaluate the scheme quantitatively at pan India level using nonparametric approach of DEA.
• A total amount of $780 million is projected as input resource savings for the inefficient states.
• Participation of socio-economic weaker sections & women in the scheme has been analyzed.
• Ranking of the states has been done using cross efficiency approach.

Mahatma Gandhi National Rural Employment Guarantee Act (MGNREGA) is the world’s largest social welfare scheme in India for the poverty alleviation through rural employment generation. This paper aims to evaluate and rank the performance of the states in India under MGNREGA scheme. A non-parametric approach, Data Envelopment Analysis (DEA) is used to calculate the overall technical, pure technical, and scale efficiencies of states in India. The sample data is drawn from the annual official reports published by the Ministry of Rural Development, Government of India. Based on three selected input parameters (expenditure indicators) and five output parameters (employment generation indicators), I apply both input and output oriented DEA models to estimate how well the states utilize their resources and generate outputs during the financial year 2013–14. The relative performance evaluation has been made under the assumption of constant returns and also under variable returns to scale to assess the impact of scale on performance. The results indicate that the main source of inefficiency is both technical and managerial practices adopted. 11 states are overall technically efficient and operate at the optimum scale whereas 18 states are pure technical or managerially efficient. It has been found that for some states it necessary to alter scheme size to perform at par with the best performing states. For inefficient states optimal input and output targets along with the resource savings and output gains are calculated. Analysis shows that if all inefficient states operate at optimal input and output levels, on an average 17.89% of total expenditure and a total amount of $780million could have been saved in a single year. Most of the inefficient states perform poorly when it comes to the participation of women and disadvantaged sections (SC&ST) in the scheme. In order to catch up with the performance of best performing states, inefficient states on an average need to enhance women participation by 133%. In addition, the states are also ranked using the cross efficiency approach and results are analyzed. State of Tamil Nadu occupies the top position followed by Puducherry, Punjab, and Rajasthan in the ranking list. To the best of my knowledge, this is the first pan-India level study to evaluate and rank the performance of MGNREGA scheme quantitatively and so comprehensively.