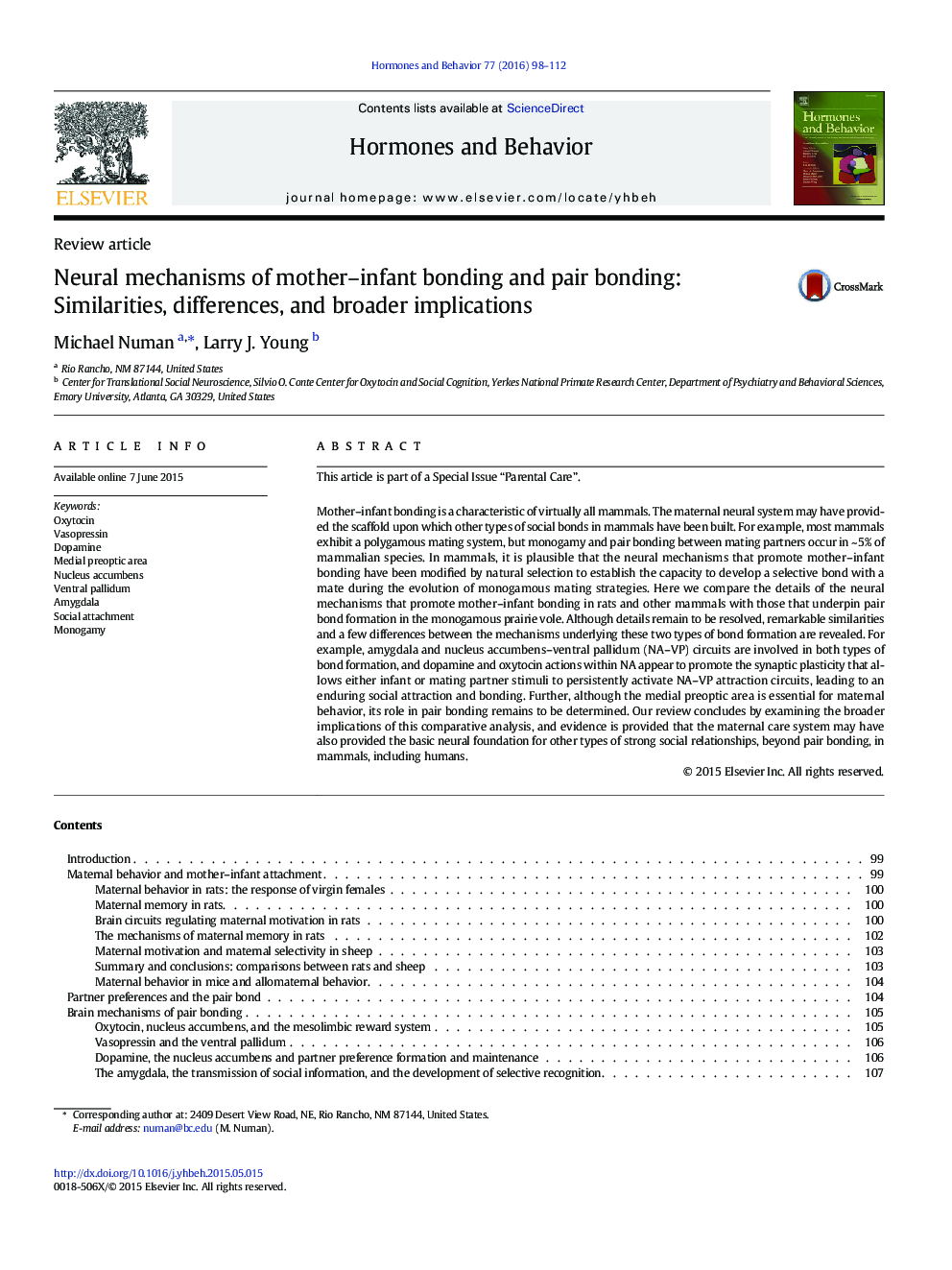 • Mother–infant bonding is typical of all mammals but monogamy with pair bonding is rare.
• Remarkable similarities exist in the neural mechanisms of mother–infant bonding and pair bonding.
• Dopamine and oxytocin actions on the nucleus accumbens–ventral pallidum circuit are involved.
• The maternal neural circuitry may have provided the foundation for other types of strong social bonds in mammals.

This article is part of a Special Issue “Parental Care”.Mother–infant bonding is a characteristic of virtually all mammals. The maternal neural system may have provided the scaffold upon which other types of social bonds in mammals have been built. For example, most mammals exhibit a polygamous mating system, but monogamy and pair bonding between mating partners occur in ~ 5% of mammalian species. In mammals, it is plausible that the neural mechanisms that promote mother–infant bonding have been modified by natural selection to establish the capacity to develop a selective bond with a mate during the evolution of monogamous mating strategies. Here we compare the details of the neural mechanisms that promote mother–infant bonding in rats and other mammals with those that underpin pair bond formation in the monogamous prairie vole. Although details remain to be resolved, remarkable similarities and a few differences between the mechanisms underlying these two types of bond formation are revealed. For example, amygdala and nucleus accumbens–ventral pallidum (NA–VP) circuits are involved in both types of bond formation, and dopamine and oxytocin actions within NA appear to promote the synaptic plasticity that allows either infant or mating partner stimuli to persistently activate NA–VP attraction circuits, leading to an enduring social attraction and bonding. Further, although the medial preoptic area is essential for maternal behavior, its role in pair bonding remains to be determined. Our review concludes by examining the broader implications of this comparative analysis, and evidence is provided that the maternal care system may have also provided the basic neural foundation for other types of strong social relationships, beyond pair bonding, in mammals, including humans.