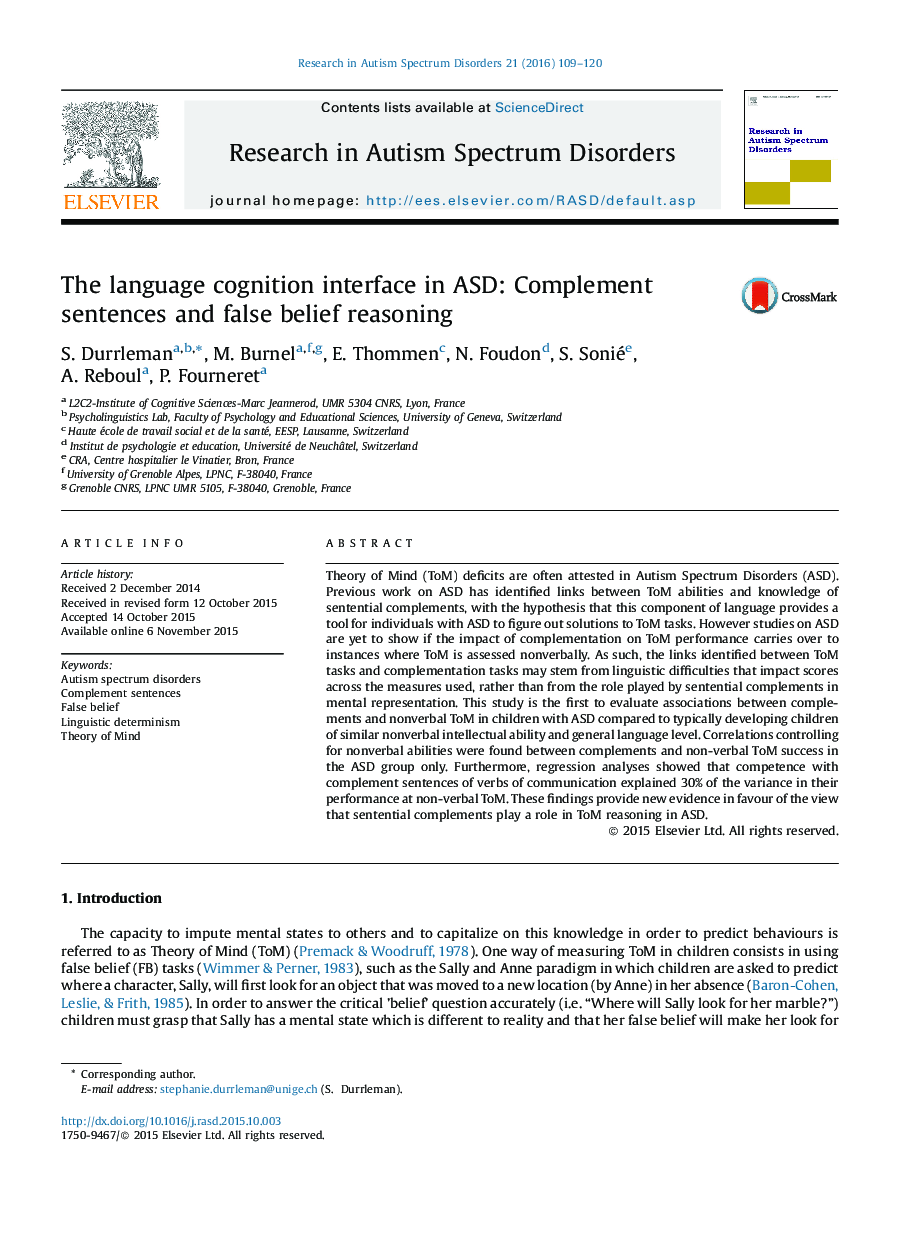 • Knowledge of finite complements in children with autism spectrum disorder (ASD) is related to Theory of Mind (ToM) task success even when the ToM task is a non-verbal one.
• These findings provide new evidence in favour of the linguistic determinism hypothesis (De Villiers, 1995, De Villiers, 2000 and de Villiers and de Villiers, 2000).
• Complement sentences of perception verbs, which do not describe a false event, are related to success at certain ToM tasks (Baron-Cohen et al., 1986), suggesting that the syntax of metarepresentation may allow ASD children to deal with misrepresentation (see also Smith, Apperly, & White, 2003; Poltrock, 2010).
• Mastery of complementation with verbs of communication is most predictive of ToM performance, showing the privileged impact of this linguistic tool in false belief reasoning in ASD (Tager-Flusberg & Joseph, 2005).

Theory of Mind (ToM) deficits are often attested in Autism Spectrum Disorders (ASD). Previous work on ASD has identified links between ToM abilities and knowledge of sentential complements, with the hypothesis that this component of language provides a tool for individuals with ASD to figure out solutions to ToM tasks. However studies on ASD are yet to show if the impact of complementation on ToM performance carries over to instances where ToM is assessed nonverbally. As such, the links identified between ToM tasks and complementation tasks may stem from linguistic difficulties that impact scores across the measures used, rather than from the role played by sentential complements in mental representation. This study is the first to evaluate associations between complements and nonverbal ToM in children with ASD compared to typically developing children of similar nonverbal intellectual ability and general language level. Correlations controlling for nonverbal abilities were found between complements and non-verbal ToM success in the ASD group only. Furthermore, regression analyses showed that competence with complement sentences of verbs of communication explained 30% of the variance in their performance at non-verbal ToM. These findings provide new evidence in favour of the view that sentential complements play a role in ToM reasoning in ASD.