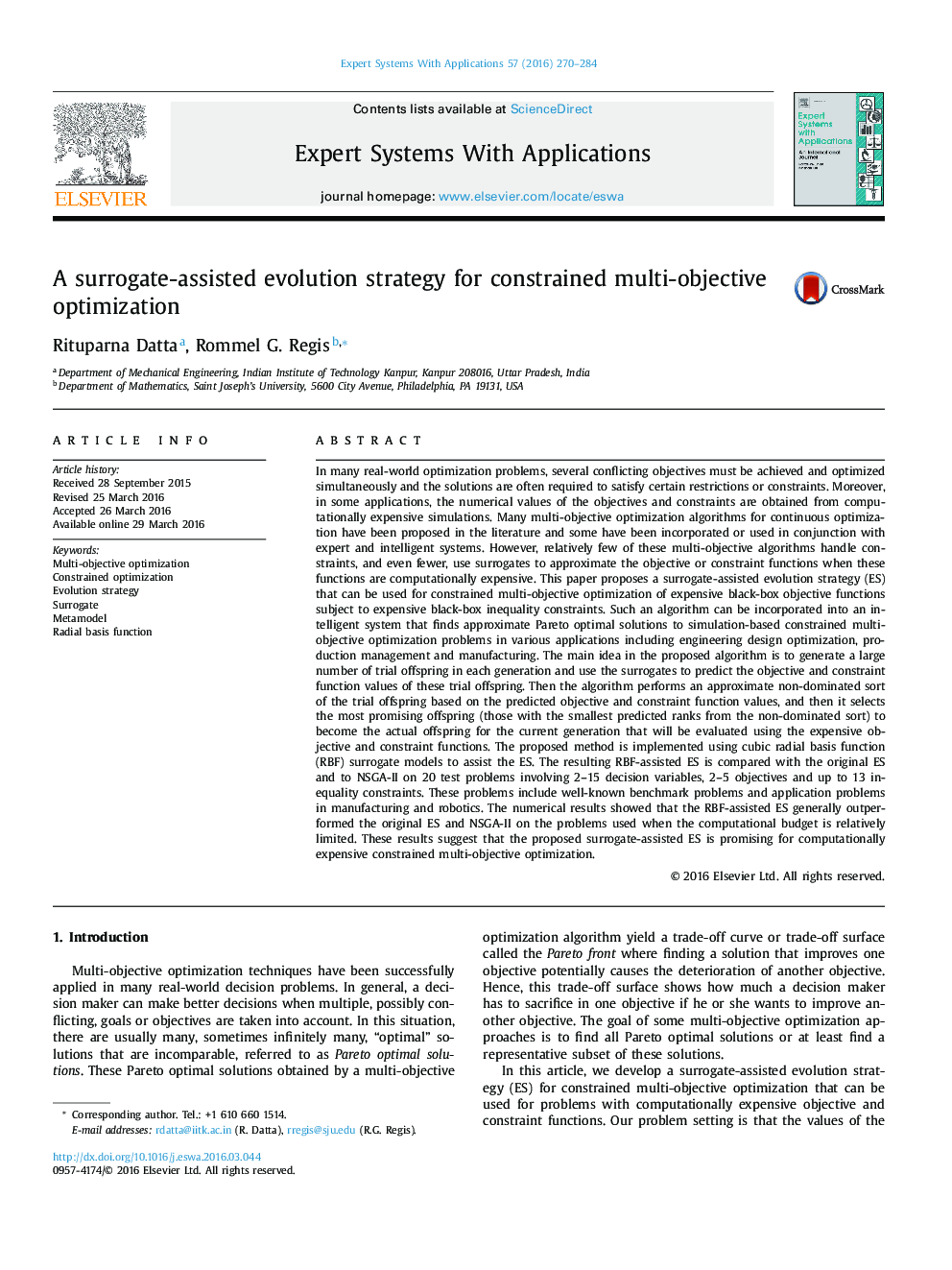 • New surrogate-assisted ES for constrained multi-objective optimization is developed.
• Surrogates are used to identify the most promising among many trial offspring.
• A radial basis function (RBF) model is used to implement the method.
• Method is tested on benchmark problems and manufacturing and robotics applications.
• Proposed method generally outperforms an ES and NSGA-II on the problems used.

In many real-world optimization problems, several conflicting objectives must be achieved and optimized simultaneously and the solutions are often required to satisfy certain restrictions or constraints. Moreover, in some applications, the numerical values of the objectives and constraints are obtained from computationally expensive simulations. Many multi-objective optimization algorithms for continuous optimization have been proposed in the literature and some have been incorporated or used in conjunction with expert and intelligent systems. However, relatively few of these multi-objective algorithms handle constraints, and even fewer, use surrogates to approximate the objective or constraint functions when these functions are computationally expensive. This paper proposes a surrogate-assisted evolution strategy (ES) that can be used for constrained multi-objective optimization of expensive black-box objective functions subject to expensive black-box inequality constraints. Such an algorithm can be incorporated into an intelligent system that finds approximate Pareto optimal solutions to simulation-based constrained multi-objective optimization problems in various applications including engineering design optimization, production management and manufacturing. The main idea in the proposed algorithm is to generate a large number of trial offspring in each generation and use the surrogates to predict the objective and constraint function values of these trial offspring. Then the algorithm performs an approximate non-dominated sort of the trial offspring based on the predicted objective and constraint function values, and then it selects the most promising offspring (those with the smallest predicted ranks from the non-dominated sort) to become the actual offspring for the current generation that will be evaluated using the expensive objective and constraint functions. The proposed method is implemented using cubic radial basis function (RBF) surrogate models to assist the ES. The resulting RBF-assisted ES is compared with the original ES and to NSGA-II on 20 test problems involving 2–15 decision variables, 2–5 objectives and up to 13 inequality constraints. These problems include well-known benchmark problems and application problems in manufacturing and robotics. The numerical results showed that the RBF-assisted ES generally outperformed the original ES and NSGA-II on the problems used when the computational budget is relatively limited. These results suggest that the proposed surrogate-assisted ES is promising for computationally expensive constrained multi-objective optimization.